After a historically disastrous hurricane season in 2017, the Defense Department is trying to figure out how to better respond to future hurricanes.

“We just finished an internal NORTHCOM lessons learned conference. We are going to go out to [the office of the secretary of defense]. The conversation that we had is ‘Is there a difference between Texas, Florida and Puerto Rico?’ So you’ve got state, state and island. What can we learn out of that and can we think about that differently,” Robinson said.

NORTHCOM plays a support role to FEMA and the state governors where the disasters occur.

Puerto Rico has been especially on the mind of some lawmakers, as large swaths of the island are still without power months after being devastated by Hurricane Maria.

“We need to think much harder about the role that DoD plays in future hurricanes because we know they are coming,” Sen. Elizabeth Warren (D-Mass.) said.

Robinson noted that every hurricane has its own attributes.

The review will look to see if force structure is set up appropriately and if NORTHCOM has the equipment it needs.

“We provide niche, unique capabilities that, at that place as an example, that the Guard might not have. And [we] ensure that we have it positioned at the right place at the right time to be there when it’s necessary,” Robinson said.

Defense Secretary Jim Mattis gave Robinson carte blanche for what she needed in helping the states and territories affected by the hurricanes.

Robinson said an interagency and state review is needed to find out if the states were able to request the equipment and services they needed to make the most impact.

Hurricane season took a big toll on the Coast Guard, which shined through the five hurricanes.

The Coast Guard Cutter USCGC James is still stationed in Puerto Rico running command and control for the area after Hurricane Maria left the territory in the dark.

“Harvey exploded in the central Gulf of Mexico. It was a weak category one and then within 24 hours it exploded to be strong category four and then it just hovered off the coast of Mexico between Corpus Christi and Houston and bringing an unprecedented 52 inches of rain,” Coast Guard Commandant Paul Zukunft told Federal News Radio in January. “As soon as it imploded we were already starting to move forces. Getting them as close to the scene as possible.”

Zukunft said the Coast Guard saved a total of 12,000 lives during hurricane season. The service was able to harness social media and work with the National Security Agency to find people stranded on rooftops or in need of medical attention. 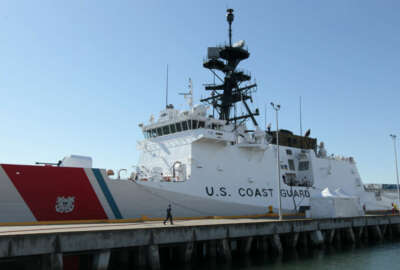 Coast Guard can only handle another month of CR