The Federal Assets Sale and Transfer Act is touted as a law that will help the government offload properties, cut down on waste, and drive economic development — but those benefits went to the backburner at a recent congressional hearing, in lieu of questions about the FBI’s shuttered headquarters project and the Old Post Office Pavilion’s new tenant.

The Federal Assets Sale and Transfer Act is touted as a law that will help the government offload properties, cut down on waste, and drive economic development — but those benefits went to the backburner at a recent congressional hearing, in lieu of questions about the FBI’s shuttered headquarters project and the Old Post Office Pavilion’s new tenant.

One day after GSA officially announced its cancellation of the Federal Bureau of Investigation headquarters project, Horne defended the decision to halt plans, saying the “structure of the deal, plus the lack of funding, equals an inability to move forward.”

“We are absolutely committed to working with this committee and the Office of Management and Budget on all options moving forward,” Horne told subcommittee members. “There is no doubt the FBI consolidation is a priority for this administration and for GSA.”

GSA in its official statement pointed to a $882 million funding gap for the project. The Obama administration had proposed to partially defray the costs by trading the downtown Washington real estate upon which the J. Edgar Hoover building now sits to the same developer chosen to build the new facility.

While the news came as a shock to many, subcommittee Chairman Lou Barletta (R-Pa.) said he wasn’t surprised at the news. His committee warned an exchange strategy was a mistake, he said, because it meant having to build a whole new facility before the FBI could move out and hand over the Hoover building as payment to the developer.

“The need for a consolidated FBI headquarters remains, and I strongly encourage this administration to pursue a public-private partnership strategy,” Barletta said. “I believe a P3 is the only way to deliver a consolidated headquarters for the FBI. I believe the administration will have strong bipartisan support for allowing GSA to use a ground lease, leaseback or a discounted purchase option to acquire a new headquarters. I’m willing to do whatever I can do help GSA get OMB approval to do this, and I hope that you will pursue such a strategy. We have the opportunity to fix this project and get it back on track.”

Rep. Barbara Comstock (R-Va.), who represents a number of federal employees who live just outside the Capital Beltway, also wanted to know why a different strategy wasn’t pursued in getting a new home for the law enforcement agency.

“Didn’t they propose a public-private partnership so that they could take the valuable asset that they have in D.C., and be able to use that,” Comstock said. “Obviously, when you buy a new house, you use your old house as collateral in order to be able to buy the new one. So why wasn’t that normal process followed?”

Horne said at the beginning of the process, which started in 2012, multiple options were considered for funding the plans.

“I don’t know exactly why it was structured the way that it was, but I do know everyone felt it was unlikely that we could receive the full appropriation, and needed to seek ways to bridge that funding gap,” said Horne, who worked for GSA at the time, but was serving as a director in Denver, and as part of the Obama presidential transition team. “The FBI is a critical project on a variety of fronts. Aside from the money that it will save from consolidating FBI functions from expensive leases, the most important part is supporting the mission of the FBI. So it’s critical that we move forward. It’s the right thing to do.”

Horne also wasn’t in his current role for another hot topic at the subcommittee hearing — the Old Post Office hotel and its current owner, the Trump Organization.

Former Deputy Commissioner of GSA’s Public Buildings Service, [and now acting Director of Public Buildings Service] Michael Gelber, told Democratic lawmakers at a Dec. 8 briefing that President Donald Trump must sell off his financial stake in the Trump Hotel, located blocks away from the White House, due to a clause in the contract that prohibits elected officials from leasing the federally-owned Old Post Office Pavilion.

In March, GSA’s Contracting Officer Kevin Terry and general counsel ruled that Trump was not in violation of his lease with GSA because he put the hotel in a trust and is not benefiting from the profits while he is in office.

But subcommittee Democrats still had questions about the verdict.

“Although GSA and the Trump Old Post Office LLC have claimed the president is not benefiting from the lease, he’s clearly benefitting from the lease,” said Rep. Hank Johnson (D-Ga.). “The president has listed the loan he took from Deutsche Bank to renovate the Old Post Office Building as a personal liability. Under the new operating agreement with the Trump Old Post Office LLC, the president may use his share of the profits to back the Deutsche Bank loan that he lists as a personal liability in his financial disclosure. It remains inescapable that President Trump is still gaining a significant benefit from doing business with the GSA, an agency that he controls, an agency that he is supposed to be leading on behalf of the American taxpayer.”

Horne said Terry worked closely with GSA’s Office of General Counsel, and his own job as administrator “is to create an environment where contracting officers can make decisions, business decisions, free from political or senior leadership influence.”

Asked by Johnson whether he was “familiar with the fact” the lease had not been submitted to GSA’s counsel, the Justice Department, or Office of Government Ethics for an official legal opinion, Horne said he was “familiar with the fact the contracting officer, along with the guidance of the Office of Legal Counsel has determined the tenant meets the full compliance of the lease.

Rep. Peter DeFazio (D-Ore.) said the situation is akin to having a president that “is both the landlord and the tenant.”

DeFazio announced a resolution of inquiry, which asks for all documents associated with the lease, along with legal memos and opinions.

The inquiry also called for information about the administration’s directive to agencies that they only respond to requests for information on oversight matters, from a chairman or chairwoman of a congressional committee.

Former President Barack Obama signed the FAST Act into law in December. It stands up a mechanism where the administration can identify underused or vacant federal property, and establishes a Public Buildings Reform Board for recommending specific property to reuse or sell off.

According to the Government Accountability Office’s audit of the federal government’s fiscal 2015 and 2016 consolidated financial statements, the government has 275,000 buildings in its domestic real property inventory.

That inventory costs about $18.7 billion in annual operation and maintenance expenditures, the audit found, including more than $7 billion in leasing.

Brett Simms, director of the Capital Asset Management Service within the Office of Asset and Enterprise Management at the Veterans Affairs Department, said real estate plays an important role at his department.

VA owns a majority of its portfolio — 86 percent of its square footage — and maintains roughly 155 million square feet, in more than 6,200 owned buildings, and on more than 35,000 acres of land.

“VA’s portfolio of nearly 180 million square feet is one of the largest in the federal government,” Simms said. “VA has a complex real estate portfolio, and seeks to maintain the optimal mix of investments needed to provide care, services and benefits to our nation’s veterans. VA welcomes new or expanded tools to reduce its vacant and underutilized real property assets, establish viable reuses where possible, cut waste and save taxpayer dollars. The FAST Act, in combination with expanded [Enhanced-Use Lease] authority, and other strategies, will help VA continue to address its most challenging assets.” 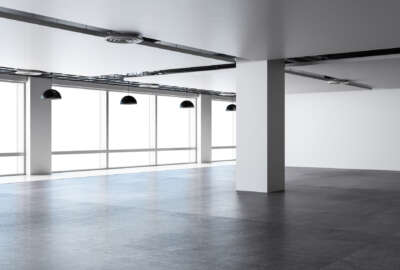