Secretary of State Mike Pompeo overturned the agency’s hiring freeze less than a month into his tenure, and promised lawmakers he’ll fight for “every dollar we need to deliver” for his agency’s mission, but he still faces an uphill battle staffing up an agency the Trump administration seeks to shrink.

Between September 2017 and July 2018, the State Department saw its total workforce increase by more than 500 employees. The agency now has a workforce of...

Secretary of State Mike Pompeo overturned the agency’s hiring freeze less than a month into his tenure, and promised lawmakers he’ll fight for “every dollar we need to deliver” for his agency’s mission, but he still faces an uphill battle staffing up an agency the Trump administration seeks to shrink.

Between September 2017 and July 2018, the State Department saw its total workforce increase by more than 500 employees. The agency now has a workforce of than 75,000 people across the globe.

This Thursday, the Senate Foreign Relations Committee will hold a confirmation hearing for David Hale, a career member of the Senior Foreign Service, and President Donald Trump’s pick to serve as undersecretary of state for political affairs.

The Senate has more than 40 pending State Department nominees to contend with. Of those, Hale stands out as the only nominee with a career employee background.

“Secretary Pompeo clearly wants to take care of his people,” retired Ambassador Ronald Neumann, president of the American Academy of Diplomacy, said in an interview Monday. “But at the same time, if you’re not going to use any career officers for senior positions, you’re signaling that the administration as a whole — possibly not the secretary — is frankly anti-professional.”

At the assistant secretary level, the White House has completely overlooked the civil service and foreign service.

At the secondary and tertiary levels of management, Neumann said the agency has traditionally hired from within its own senior ranks.

After former Secretary of State Rex Tillerson’s firing in March, Pompeo has worked quickly to get his own team into place, but a number of key management positions remain vacant.

In July, the Senate Foreign Relations Committee held a hearing for Brian Bulatao, the White House’s second pick for the undersecretary for management position.

The president withdrew his first pick, Eric Ueland, a former Republican staff official on the Senate Budget Committee and current senior official at the Millennium Challenge Corporation, in June after waiting for more than a year without a committee hearing.

Last month, Trump nominated Carol Perez to serve as director general of the Foreign Service and director of human resources — also his second pick for the job.

He withdrew Stephen Akard, his first choice, from consideration in March after a back-and-forth with the foreign relations committee. Senators returned Akard’s nomination, but Trump re-submitted his name for consideration.

In June, Sen. Bob Menendez (D-N.J.), the committee’s ranking member, wrote a letter to Pompeo urging the Trump administration to more thoroughly vet State Department appointees. He complained that several had failed to make full disclosures in their mandatory paperwork.

“Over the course of the 115th Congress, the nominations process has been unnecessarily lengthened for some nominees because of poor vetting on the part of the administration,” Menendez said.

When Pompeo lifted the agency’s hiring freeze in May, he also overturned the temporary freeze on Family Member Appointments (FMA), and has a plan in place to increase the number of entry-level foreign service officers.

But while Pompeo looks to change course from Tillerson’s policies, Neumann said the White House’s budget proposals for the State Department have made it more difficult to restore the agency to pre-hiring freeze staffing levels.

“When you get the hiring freeze off, you don’t necessarily have enough money to just hire back everybody,” he said.

The Trump administration’s fiscal 2019 budget proposal for the State Department proposes cutting its funding by about 30 percent.

“There are longstanding problems with how the civil service is used in the State Department,” he said. “The system is rigid — it’s rigid for people, and it’s also managerially rigid and not as useful for the department as it could be.”

Neumann recommended that the State Department reinvest in its professional education and training programs, although he added they’ve seen recent improvement. He also urged agency management to revise career ladders for the civil service.

These problems also exist for foreign service specialists, who serve as secretaries, communicators, IT specialists and security personnel at international outposts.

“While you’re solving of these high profile things, there’s also need to work on these very important issues to increasing our professionalism and quality over time.”

The American Academy of Diplomacy has teamed up with Partnership for Public Service for a research projected aimed at examining longstanding management issues in the State Department’s civil service.

US Embassy in Albania 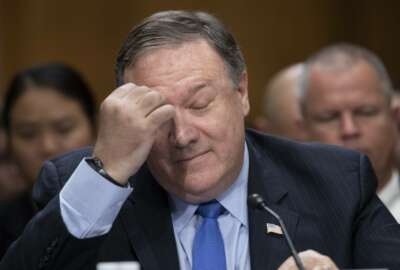