When it comes to helping the government be efficient and effective, agencies say they need Congress to support them through legislation, money and to simply trust that “it’s got to be OK to fail.”

Members of four agencies shared their advice for lawmakers during a June 16 roundtable discussion on the Government Accountability Office’s High Risk List. The list highlights areas of the government that are “high risk due to their greater vulnerabilities to fraud, waste, abuse and mismanagement...

When it comes to helping the government be efficient and effective, agencies say they need Congress to support them through legislation, money and to simply trust that “it’s got to be OK to fail.”

Members of four agencies shared their advice for lawmakers during a June 16 roundtable discussion on the Government Accountability Office’s High Risk List. The list highlights areas of the government that are “high risk due to their greater vulnerabilities to fraud, waste, abuse and mismanagement or the need for transformation to address economy, efficiency or effectiveness challenges.”

Jeff Shuren, director of the Center for Devices and Radiological Health at the Food and Drug Administration, said it’s time to focus on “non-sexy stuff for a while.”

“One of the biggest holdbacks in the agencies, it’s stuff like hiring, retention, recruitment, contracts,” Shuren said. “Government creates so much bureaucracy that government gets in the way of government. In my space, if we want our device industry to be innovative, government has to be innovative for us to innovate. Let us fail sometimes. We have to fail in order to succeed.”

Michelle Benecke, executive director for management integration at the Homeland Security Department, said her agency has a core of senior executives who are committed to addressing GAO’s high-risk reports. But, with the presidential election this year, Congress has a role to underscore this report to incoming leadership.

“I believe that continued oversight, by this committee, will be essential as we go through the transition to underscoring the importance of the GAO high-risk issues, and for the department, their direct connection to strengthening our management functions,” Benecke said.

GAO releases the list at the start of every Congress, explained Chris Mihm, GAO managing director for strategic issues.

Progress for the criteria are broken down into three categories: met, partially met and not met.

The most recent full report was released in February 2015. GAO found 32 high-risk areas according to the five criteria. The next update is due in early 2017, but GAO released an April update by request from the Senate Committee on Homeland Security and Governmental Affairs.

“For years, I’ve seen GAO’s High Risk List as our ‘to do’ list here in Congress,” Sen. Tom Carper (D-Del.) said during the roundtable. “I’ve argued that we should use it to focus our oversight and legislative efforts on those reforms most likely to achieve meaningful results and save taxpayer dollars.”

Among some of the reforms efforts noted in GAO’s update:

The list, Mihm said, “is not just something you go on and then you’re there forever.”

“Progress is possible, and tackling challenges on the list is important to make government more effective,” he said.

Congress and agencies need to be able to “sit down at the table together and be able to talk and say this is a problem how do we fix it together, and realize we’re on the same team,” said Sen. James Lankford (R-Okla.). “We all want the same things. The more combative the relationship is, the harder it is to get anything done.”

Sen. Heidi Heitkamp (D-N.D). asked how technology was helping to eliminate government waste and abuse. Benecke said DHS is using it to modernize its financial systems, while Shuren said technology helps his department to monitor its review of moderate and high-risk devices before they go to market.

Mihm said across the government, one of the biggest gaps is managing data analytics.

“There’s a whole era of big data, there’s always a lot of jargon associated with it,” Mihm said. “But there’s an enormous amount of information that’s now becoming available. We, all of us — that includes analysts in the GAO — need to get much more sophisticated in using that information, in pinpointing problems, identifying improvement opportunities and going after those.”

Agencies on GAO’s High Risk List find the bright side

Are agencies doing enough to weed out redundant programs? 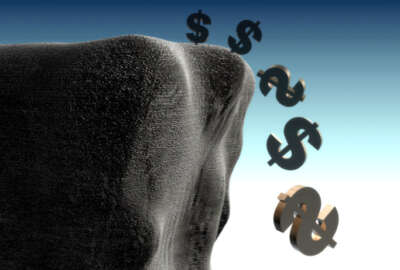