The Deputy Commissioner of GSA’s Public Buildings Service, Michael Gelber, told Democratic lawmakers at a Dec. 8 briefing that Trump must sell off his financial stake in the Trump Hotel, located blocks away...

The Deputy Commissioner of GSA’s Public Buildings Service, Michael Gelber, told Democratic lawmakers at a Dec. 8 briefing that Trump must sell off his financial stake in the Trump Hotel, located blocks away from the White House, due to a clause in the contract that prohibits elected officials from leasing the federally-owned Old Post Office Pavilion.

“The Deputy Commissioner informed our staff that GSA assesses that Mr. Trump will be in breach of the lease agreement the moment he takes office on January 20, 2017, unless he fully divests himself of all financial interests in the lease for the Washington D.C. hotel. The Deputy Commissioner made clear that Mr. Trump must divest himself not only of managerial control, but of all ownership interest as well,” the Democratic coalition said in their Dec. 14 letter to the GSA administrator.

The Democrats, all ranking members on committees and subcommittees with government contract oversight, also bristled at the discovery that GSA’s primary point of contact in carrying out the lease has been Ivanka Trump, the President-elect’s daughter.

“In other words, Ms. Trump is all of the following — the President-elect’s daughter, a top presidential transition team official, a lessee under the contract GSA oversees, and the primary contact for GSA on the lease.  The conflicts of interest are obvious,” Democrats said in their letter.

GSA is now the second federal agency to weigh in on the magnitude of the President-elect’s upcoming conflicts of interests. The Office of Government Ethics, responding to an inquiry by Sen. Tom Carper (D-Del.), determined that Trump’s proposed handoff of his business assets to his three oldest children would not satisfy the requirements to qualify as a “blind trust.”

While federal law does not require Trump to set up a blind trust, most presidents since Lyndon Johnson have done so. The primary conflict-of-interest provision of the U.S. Code (Title 18, Section 208) applies to federal employees, but not the president or vice president.

However, contention surrounding Trump’s lease on the federally-owned Old Post Office Pavilion appears to be focused entirely on the wording of the contract.

The Trump Organization’s lease with GSA states that “no member or delegate to Congress, or elected official of the Government of the United States … shall be admitted to any share or part of this Lease, or to any benefit that may arise therefrom.” Gelber, a career federal employee, told lawmakers that the contract language is a standard provision in GSA leases that’s designed to create a “level playing field.”

In a Nov. 28 commentary on Government Executive, Steven Schooner and Dan Gordon, both professors of procurement law at The George Washington University Law School, argued that Trump is clearly in violation of his lease with GSA. Gordon was also President Barack Obama’s first administrator for federal procurement policy.

“To protect the integrity of the federal government’s procurement process, GSA must end its lease arrangement with President-elect Trump now,” they wrote.

However, GSA’s response to the Democrats’ letter has only further complicated where the government stands on the lease’s legality. When asked for comment, a GSA spokesperson walked back the deputy commissioner’s conclusion that President-elect Trump must divest his financial stake in his hotel.

“GSA does not have a position that the lease provision requires the President-elect to divest of his financial interests,” the spokesperson said in a statement. “We can make no definitive statement at this time about what would constitute a breach of the agreement, and to do so now would be premature. In fact, no determination regarding the Old Post Office can be completed until the full circumstances surrounding the President-elect’s business arrangements have been finalized and he has assumed office. GSA is committed to responsibly administering all of the leases to which it is a party.” 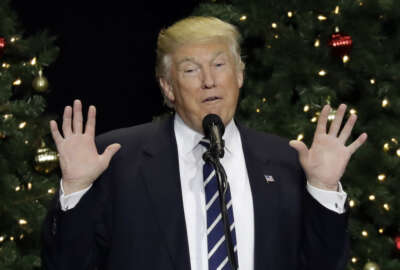