The Homeland Security Department’s Joint Requirements Council (JRC) has been slowing turning the metaphorical ship on a new process that’s designed to help its 22 agency components find and invest in common capabilities.

Now about a year-and-a-half into that process, the council is thinking about how to finish the turn and mature well into the future.

“We want to be pre-acquisition,” Vincent DeLaurentis, director of the DHS Joint Requirements...

The Homeland Security Department’s Joint Requirements Council (JRC) has been slowing turning the metaphorical ship on a new process that’s designed to help its 22 agency components find and invest in common capabilities.

Now about a year-and-a-half into that process, the council is thinking about how to finish the turn and mature well into the future.

“We want to be pre-acquisition,” Vincent DeLaurentis, director of the DHS Joint Requirements Council, told a group of industry executives at the Homeland Security and Defense Business Council’s Feb. 14 “national conversation” in Arlington, Virginia. “We want to be thinking, from a requirements prospective, three-to-10 years ahead. What are those vulnerabilities? What are those threats? What capability is going to be needed three-to-10 years down the road?”

The council has spent the past year and a half building up a staff and teaching DHS components how to find commonality in the requirements process, DeLaurentis said.

The JRC has also spent the past year reviewing more than 150 requirements documents within the department.

After some initial discussion, the council realized that about 95 percent of the requirements for that capability were shared between the two agencies and 5 percent were unique to each component.

Ultimately, DeLaurentis said he hopes the Joint Requirements Council can be in a place where it facilitates a conversation among DHS components, which in turn define their own problems and requirements.

“The components are going to be the ones that are generating the capabilities and the requirements,” DeLaurentis said. “We want to move to a point where the JRC is more about validating and checking the homework than it is about helping the component develop or generate their own requirements.”

But about a year-and-a-half after the department stood up its Joint Requirements Council, the Homeland Security Industrial Base said it’s still vying for more communication and collaboration from DHS. And the DHS industrial base is still seeking guidance on how it can interact with the JRC.

It hasn’t been a particularly active year either for the Deputy’s Management Action Group (DMAG), said Marc Pearl, president and CEO for the Homeland Security and Defense Business Council.

Pearl and the Homeland Security and Defense Business Council are actively recommending the department continue to strengthen both DMAG and the JRC in the coming years.

The recommendation is part of a series of reports from the Homeland Security and Defense Business Council and Grant Thornton, which have studied the challenges facing the homeland security enterprise since the beginning of DHS and ahead of the year 2020.

Members of industry called for more collaboration with DHS back in 2015, shortly after the department stood up the Joint Requirements Council.

About two years later, the calls for more communication continue. Now, former executives who once started at DHS in its early years are seeing those frustrations as new additions to industry.

Fewer current DHS executives held a positive view of the Homeland Security Industrial Base compared to former federal officials or industry executives, according to the latest report from the DHS Business Council and Grant Thornton.

About 67 percent of current government officials said industry had the ability to bring innovative solutions to DHS not already found in government, according to the report. Roughly 85 percent of former federal executives and 98 percent of industry, however, agreed or strongly agreed that the DHS industrial base brought essential value to the agency’s mission.

Several former DHS executives said they gained a clearer view and greater appreciation for industry’s role in government after leaving their agencies.

“I was pretty shocking to me, quite frankly, how … government and industry behaved when it comes to governance,” Sims said “Not knowing what a color-team was or experiencing that until I got out of the government, not really seeing the kind of decisions you need to make as to how you make investments in bidding and responding to opportunities. That was very enlightening. It showed to me though that the government … had a full appreciation for the kind of commitment you’re making when those bids are coming forward.”

Some former executives also said they wished they had gotten out of the office to talk with vendors more often.

Joe Nimmich, a former deputy administrator for the Federal Emergency Management Agency, said he often felt discouraged from meeting with anyone from industry. It wasn’t until he left government that he got a better sense of what industry did and how it worked.

David Haun, director of Grant Thornton’s public sector practice and a former deputy associate director with the Office of the Management and Budget, said neither industry nor government have many incentives to informally discuss their ideas.

“There’s no structure for industry and government to come together at a very senior level and recognize that we’re equal partners in this endeavor called government,” he said. 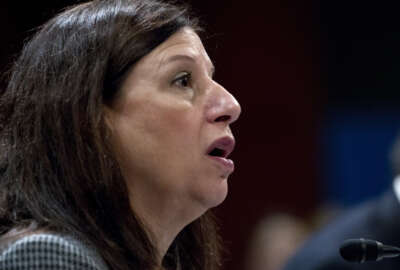