When it comes to “reopening” during this pandemic, some say it’s too soon, others say it can’t come soon enough.

The Trump administration offered up new guidance last week on how agencies could resume “normal operations.” It was supposed to serve as a framework and help agency leaders decide when and how to reopen federal offices and gradually call employees back from telework — consistent with local conditions.

But something about that guidance prompted the three leaders...

When it comes to “reopening” during this pandemic, some say it’s too soon, others say it can’t come soon enough.

The Trump administration offered up new guidance last week on how agencies could resume “normal operations.” It was supposed to serve as a framework and help agency leaders decide when and how to reopen federal offices and gradually call employees back from telework — consistent with local conditions.

But something about that guidance prompted the three leaders of the national capital region jurisdictions to warn the Trump administration last week against reopening federal offices too soon.

“This is a hard balancing act between ensuring the continuation of critical government functions and ensuring the safety and well-being of employees,” Maryland Governor Larry Hogan, Virginia Governor Ralph Northam and District of Columbia Mayor Muriel Bowser wrote. “But we know that the Trump administration can similarly make these appropriate judgments, and we hope the federal telework posture is reflective of our own local operating statuses.”

The guidance encourages agency leaders to take the lead, at least initially, from the states.

A one-size-fits all approach to reopening federal offices may not work in a diverse federal workforce of 2 million people, said Dan Blair, who served as deputy director for the Office of Personnel Management during the George W. Bush administration.

A federal worker in Odgen, Utah, may feel differently about returning to the office compared to another employee who lives outside New York City.

Chris Lu, who served as deputy Labor secretary during the Obama administration, said state authorities seem to be in the best position to determine whether local conditions on the ground are safe enough to warrant reopening federal offices.

The majority of employees at Labor, as is the case for many agencies, work outside of the Washington metropolitan area in regional and field offices.

“I’d ask the offices to determine what their guidance was about reopening,” said Lu, now a senior fellow at the University of Virginia’s Miller Center. “I’d probably add a layer of social distancing to this; not everyone needs to be in the office.”

Agencies could bring employees back slowly in staggered groups, as was suggested in the administration’s reopening guidance. They could also focus first on bringing back employees whose physical presence may be needed to accomplish certain tasks, like processing the mail or handling IT projects, Lu said.

The guidance then describes several other considerations — everything from school closings and mass transit availability — that agency leaders should weigh when deciding when to reopen federal offices.

But the reopening decision and the preparations that come with it may be even more difficult than it seems, Blair said.

“How do you make assurances to employees that they’re going to be safe? How do you make sure their concerns will be taken seriously? How do you treat the contractors, including the cleaning crew and cafeteria workers?” he said.

In follow-up guidance issued late last week, OPM acknowledged employees may be hesitant to return to the office, even if agencies are conscientiously following reopening advice from federal and state experts.

“Agency management should never dismiss the health concerns of employees,” the OPM guidance reads. “Some employees may have reservations about returning to their workplace even as the likelihood of contracting coronavirus diminishes. It is appropriate for agencies to work with labor unions and employees to address such concerns even after agency management has determined that it is safe for employees to return.”

Agencies should consider an employee’s health, the health or high-risk nature of a family member at home, school closings and other factors before taking action against someone who fails to show up to work even after it’s considered safe to do so, OPM said.

“There’s going to be a lot of anxiety about employees being in the office, and it’s incumbent on agency leaders to make sure they’ve taken the right procedures with cleaning and sanitizing, providing masks, etc.,” Lu said.

For Lu, reopening federal offices is an opportunity for agency managers — everyone from the frontline supervisor to the secretary — to stretch their leadership muscles.

“This is a time when creative leadership is required,” he said. “You need leadership to step up and understand that this is the time where you focus on employee morale [and] go above and beyond to address employee concerns.”

Lu said top agency leaders should focus especially on frontline supervisors, who regularly have the most direct, daily interactions with employees but may not have the tools and training they need to manage remotely.

For Blair, most employees will already have a gut feeling about their agencies’ leaders.

“You have to build trust in your leadership,” he said. “Employees need to be able to trust them, and if they don’t, then we’re in a really in a big problem here.”

Data from the latest Federal Employee Viewpoint Survey gives us some indication of how the workforce is already feeling. About 72% of employees said they have trust and confidence in their supervisors, according to a 2019 survey.

About 56% of the federal workforce said their senior leaders maintain high standards of honesty and integrity, while 57% said they have strong levels of respect in their organization’s senior leaders.

Like most everything in government, some agencies are better at it than others. Those who have have had difficulty engaging and building trust with their workforces may struggle to turn it around overnight, Lu said.

“You can’t turn on that level of engagement, you always have to have that going and not just during a crisis,” he said. “It’s something that’s ingrained within the ethos of the agency. If you’ve been an absent leader so far, it’ll be hard to turn that on.” 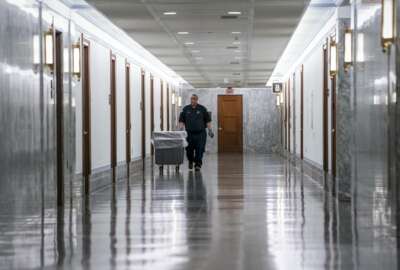 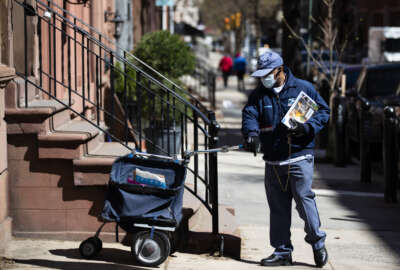