A bill to make it easier to share government data among agencies and one that sets a new default standard for open data will usher in a “new era for government,” its writer said.

Rep. Derek Kilmer (D-Wash.) said he is almost ready to drop the “OPEN Government Data Act,” which according to the 33-page draft bill obtained by Federal News Radio, will maximize  “the usefulness of federal government data … [by] … making it readily available, discoverable, and usable — in a word: open.”

A bill to make it easier to share government data among agencies and one that sets a new default standard for open data will usher in a “new era for government,” its writer said.

Rep. Derek Kilmer (D-Wash.) said he is almost ready to drop the “OPEN Government Data Act,” which according to the 33-page draft bill obtained by Federal News Radio, will maximize  “the usefulness of federal government data … [by] … making it readily available, discoverable, and usable — in a word: open.”

“The bill is going to build on President [Barack] Obama’s open data policy for the federal government. Data.gov would host an enterprise data inventory that government offices and the public would have access to. It would be in an open format, an easily searchable format by default,” Kilmer said during an April 14 event hosted by the Center for Data Innovation and the Data Coalition in Washington. “Safe and reasonable processes would be established to determine what information would be available to the public. But I think this really empowers and encourages positive changes by every agency, from the head of the agency all the way down to individual employees.”

The draft bill states that aside from data that’s prohibited from public view, the information available should be “open by default” and:

“The idea is that sure, all of this is either under [the Freedom of Information Act] or other statutes, is theoretically available to the public, but it is not meaningfully available to the public, and so if we want an efficient government, especially if we want an accountable government, we have to make this machine readable, open and inter-operable,” said Sen. Brian Schatz (D-Hawaii), a co-sponsor of the bill.

Schatz said the bill will streamline the process of getting data, increase transparency and accountability, and can help with decision and policy support within agencies.

“Even within government agencies … they’re not necessarily sharing data with each other,” Schatz said. “To get that decision support I think will allow us to make smarter decisions across the board. Getting all of these data sets to be in the same place eventually, I think is going to help our government to actually make good choices. This is the public’s information, but it’s not necessarily public information until we can access it in the way that we want to in the digital world.”

Kilmer said agencies often collect the same data, but if they can coordinate better in sharing that information, “you can avoid that duplication. That’s important because it can save taxpayer money.”

Schatz said individuals, companies and institutions should all have a basic expectation that when they interact with a government agency — federal, state or local — that it should be “as painless, as expeditious, and as efficient as possible.”

“It shouldn’t be on the individual interacting with the government to figure out which websites to log into, which forms … it’s the digital equivalent of filling everything out in triplicate,” he said.

According to the bill, each federal agency would develop an “enterprise data inventory,” which includes:

Tim Day, vice president of the U.S. Chamber of Commerce Center for Advanced Technology and Innovation, said data inventories are a necessary part of the legislation.

“The government is famous for resisting change and we’ve learned that from our work on the data act,” Day said during the event. “I think we have to have some sort of a mandate for the government — like we have within the OPEN Government Data Act — to force change. And that’s not going to be easy. It’s going to be difficult. We’ve learned a lot along the way and I think we’ll continue to learn as we move forward with this legislation. Ultimately, when we start to see what can be done with inventories and looking at ways to analyze the data and the benefits that come from data analytics and predictive analytics, it’s going to change everything.”

Kat Duffy, labs director at the Sunlight Foundation, said agencies who receive this mandate, especially if it is unfunded, are “going to be terrified.”

“This is an expensive endeavor,” she said. “This is very hard to do and you need people who really understand how to do it involved in the process. Putting this kind of thing together is a different skill set than your sort of traditional information management approach. We would also want to think through the level of investment, the level of sunk funds that we should be putting into infrastructure, and putting into the creation of these repositories to make sure that when it’s done it’s done well, in a way that can move everyone forward.”

The bill strikes out references to the administrator of E-Government and IT and replaces it with Federal CIO. It also requires the Office of Management and Budget to report on agency compliance with the act.

The act also directs the Government Accountability Office within two years of enactment to report on problems accessing information because of contractors asserting their preservation of intellectual property rights or competitive advantage.

But agencies should also look at ways “to leverage the agency’s public data asset in a manner that may provide new opportunities for innovation in the public  and private sectors,” the bill states. 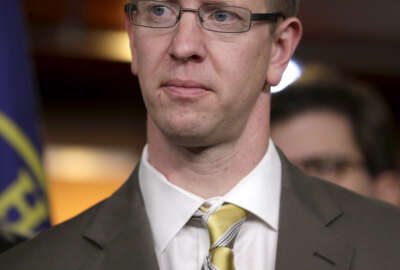