A bill to repeal the “evil twins” that reduce or eliminate Social Security benefits for retired federal employees and their spouses is coming close to a House floor vote.

The bipartisan legislation would eliminate two provisions of the 1935 Social Security Act...

A bill to repeal the “evil twins” that reduce or eliminate Social Security benefits for retired federal employees and their spouses is coming close to a House floor vote.

The other provision is the Government Pension Offset (GPO), which reduces the Social Security benefits of spouses, widows and widowers with pensions from a federal, state or local government job.

Lawmakers expect a vote on the legislation may come as soon as September.

House rules allow any bill that receives 290 cosponsors to be placed on the House Consensus Calendar, which would tee it up for a vote if it maintains those 290 cosponsors or more for 25 legislative days.

Davis told reporters in a press conference Friday the bill to eliminate these “egregious provisions” has made it further in Congress than previous efforts.

“These provisions were put in place and they became punitive against the families who have served the American people throughout their entire career,” Davis said.

Spanberger said former public servants living on a fixed income don’t deserve to have their Social Security benefits reduced, “particularly during this time marked by uncertainty, challenges and high prices across the board.”

“No American should be penalized because of their public service. These public servants have been waiting decades for a solution to this issue. And now we are so close towards rectifying this problem,” Spanberger said.

The National Active and Retired Federal Employees Association (NARFE) has advocated for Congress to eliminate WEP and GPO from the Social Security Act for years.

Thomas added the bill has “sat many times in the committee, and never got out. Now’s the time to get it done.”

Thomas said many former federal employees who also worked in the private sector are surprised by the reduction of their Social Security benefits when they retire.

“When it comes time to get their Social Security, they find out they moved the goalpost. And when they move the goalposts, it means they’re getting dinged at least $500 a month in benefits. Sometimes they’re not getting anything at all,” Thomas said.

Clyde Boatwright, president of the Maryland State Lodge of the Fraternal Order of Police, said the GPO creates a “real inequity” for law enforcement officers, who usually retire earlier than other government employees and often begin second careers, which require them to pay into the Social Security system.

Boatwright said retired law enforcement officers face as much as a 60% cut to their Social Security benefits.

“This is an issue of fairness to the public employees who have served their communities. When these public employees earn Social Security benefits through their work, they should receive the benefit in full without being penalized because of their public service,” Boatwright said.

Rep. Garret Graves (R-La.) said WEP and GPO are “disincentivizing people from going into these professions.”

The Social Security Administration currently estimates its ability to fully pay out benefits will run out in 2035, at which point it will be able to pay only 80% of benefits owed. Davis said he expects his legislation will lead to discussions in Congress “to ensure the long-term solvency of Social Security.”

“Will it cost? Absolutely it’s going to cost when you score this on a spreadsheet,” Davis said about the bill. “But what has been the cost to those families who have not been given the same benefits that every other family that did not choose public service have gotten over for decades?” 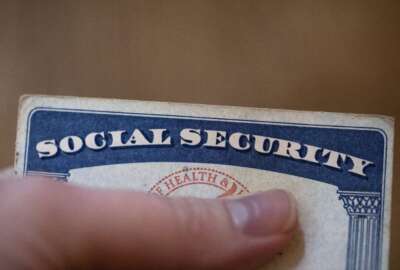