President Joe Biden has formally announced his plans to give civilian federal employees a pay raise next year, starting on Jan. 1, 2023.

Most civilian employees under the General Schedule, as anticipated, will receive an average 4.6% federal pay raise in 2023, according to the alternative pay plan Biden submitted to congressional leaders Wednesday afternoon.

Unless Congress enacts a different pay scheme for 2023, the president’s plan would implement a 4.1% increase in base pay...

President Joe Biden has formally announced his plans to give civilian federal employees a pay raise next year, starting on Jan. 1, 2023.

Most civilian employees under the General Schedule, as anticipated, will receive an average 4.6% federal pay raise in 2023, according to the alternative pay plan Biden submitted to congressional leaders Wednesday afternoon.

Unless Congress enacts a different pay scheme for 2023, the president’s plan would implement a 4.1% increase in base pay most federal workers in 2023. The plan would also boost locality pay by 0.5%, on average, resulting in a 4.6% average pay increase nationwide.

Biden said his alternative pay plan would help federal pay stay competitive with what workers with critical skills could earn in the private sector.

The announced 4.6% pay raise is an average for the civilian federal workforce, meaning that some employees, depending on where they work, may receive slightly more based on their locality pay area, and in some cases, may see a slightly lower locality pay rate.

A formula in the Federal Employees Pay Comparability Act sets locality-based raises for most federal employees on the General Schedule. The president can choose to differ from this formula, but must inform Congress of his intention to do by Aug. 31.

Biden, as have most modern presidents before him,  has chosen not to follow the statutory formula.

Federal pay raises should go into effect during the first pay period in January, though no adjustments are official until the president signs an executive order formally implementing them. Presidents usually sign those executive orders near the end of the calendar year.

Federal News Network first reported in February that Biden planned to propose a 4.6% average pay increase for federal employees as part of its fiscal 2023 budget request.

A package of fiscal 2023 spending bills passed by the House makes no mention of a federal pay raise, in what’s understood to be a tacit endorsement of the administration’s plan. The Senate, meanwhile, explicitly endorsed Biden’s 4.6% average pay raise in the draft fiscal 2023 financial services and general government spending bill.

Biden’s pay raise plan, however, falls short of a counterproposal in the FAIR Act, which would have granted the civilian federal workforce, on average, a 5.1% pay raise next year.

Ken Thomas, the national president of the National Active and Retired Federal Employees Association (NARFE), said Biden’s announced pay raise will narrow the wage gap between federal employees and those in the private sector, and “strengthen the federal government’s ability to maintain a highly qualified and effective workforce.”

The Federal Salary Council earlier this month reported that private-sector workers make up to 22% more than federal employees in comparable jobs.

“As Americans face unprecedented price increases for food, fuel, housing and other staples, this pay raise demonstrates an understanding of the value of these hard-working civil servants and the jobs they do, as well as displays the administration’s commitment to recruitment and retention of talented federal employees,” Thomas said,

Tony Reardon, national president of the National Treasury Employees Union, said the 4.6% average pay raise would be the largest of its kind in 20 years, and would “go a long way toward helping recruit and retain the public servants our government needs.”

However, Reardon said NTEU urges the administration to match the 5.1% average pay raise outlined in the FAIR Act before the end of the calendar year.

“We will continue to urge Congress and the administration to consider changing economic conditions and the 22.47% pay gap between federal employees and their private sector counterparts before making any final decisions on the 2023 federal pay increase,” Reardon said. 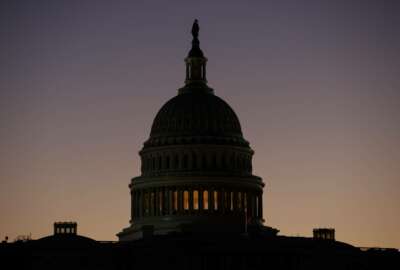