The federal community has seen a plethora of retirements and senior executives deciding it’s time to move on.

We’ve reported on significant changes such as Frank Baitman, the chief information officer at the Department of Health and Human Services, and Mark Day, deputy assistant commissioner in the Integrated Technology Services office in the Federal Acquisition Service, leaving government.

But there were several others that flew under the radar.

The federal community has seen a plethora of retirements and senior executives deciding it’s time to move on.

We’ve reported on significant changes such as Frank Baitman, the chief information officer at the Department of Health and Human Services, and Mark Day, deputy assistant commissioner in the Integrated Technology Services office in the Federal Acquisition Service, leaving government.

But there were several others that flew under the radar.

Jeff Press, the Commerce Department’s deputy director of performance strategy, decided to move to the private sector. Press, whose last day at Commerce was Nov. 13, joins Socrata to lead its government performance practice, according to an email obtained by Federal News Radio.

Press joined Commerce in August 2014 after spending almost four years as a senior advisor and executive director of the Performance Council.

His decision to join Socrata makes logical sense. The company provides cloud software to help agencies manage and make sense of large amounts of data. Socrata’s customers include NASA, the Centers for Medicare and Medicaid Services and the Justice Department’s Bureau of Alcohol, Tobacco, Firearms and Explosives. Press has been focused on performance management and using data to make better decisions over the past five years.

In mid-October, Ryan Panchadsaram, the deputy chief technology officer at the White House’s Office of Science and Technology Policy also announced he was leaving government.

Panchadsaram, who is moving back to San Francisco to be with his family, has been with the government for three years. He helped create the U.S. Digital Service, and has been an integral part of the administration’s digital government strategy and efforts, said an OSTP spokeswoman.

“Ryan Panchadsaram is a founding member of the President’s digital coalition: the teams working together across government to deliver great digital services for the American people,” said U.S. CTO Megan Smith in a statement. “He’s a smart, expansive thinker who leads with his heart, and through public service, has made an impact that has improved so many people’s lives. While we’ll miss Ryan on Team CTO, we can’t wait to see what he’ll do next.”

He was replaced by Roberta Jeanquart.

“This new program was established by the administration to provide emerging leaders with an opportunity to gain valuable experience addressing critical management issues facing the federal government and to build networks and best practices to bring back to their home agencies,” he said in a statement to Federal News Radio. “I will participate in rotational assignments to drive progress on cross-agency priority (CAP) goals, in my case specifically, the Infrastructure Permitting Modernization CAP goal. I am excited to have the opportunity to serve the American people in a different way and look forward bringing the experience I’ve gathered at GSA into this new role.”

Finally, the mystery of what happened to Joe Ward, the former head of the Interior Business Center who was persona non grata for a few months.

Ward landed at KPMG as the director of federal shared services, where he works with agencies. Ward led the IBC for more than four years and spent 27 years in government. This is his second stint with KPMG. He worked there as a manager between 2003 and 2006, and he spent two years with Deloitte before joining the Defense Travel Management Office. 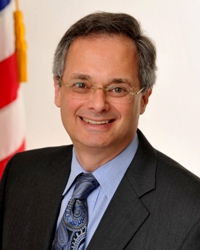