The Government Publishing Office is probably most notable for its publication of the Congressional Record.

Every day, lawmakers receive a copy of the record from the day before, which is an all-night endeavor for GPO.

Keeping the members of Congress supplied with reading material isn’t the only function of GPO, however.

One of GPO’s lesser known activities is book marbling, an ancient art of book design.

Federal News Radio recently visited the GPO headquarters in Washington to find out more about what goes behind the beautiful patterns made by marbling.

Federal News Radio’s Scott Maucione talks to GPO employees Dave Cannon, Josh Crotty and Sarah Hurtt about the jobs they do for our government.

No two marbled patterns are alike and they can range from swirling paisley motifs to swirling sequences of color that bring to mind a Japanese garden.

“The purpose [of marbling] for us is just purely decorative. But, traditionally marbling book edges was used as a form of security. If you marble the edges of a book and someone tries to a take a page out of that book and replace it with another page, the pattern will be broken and it will be obvious someone has messed with the book,” Hurtt said.

Because of that feature, marbling was used a lot for ledgers in accounting. GPO uses marbling for presentation copies of books.

Book marbling dates as far back as medieval Persia. When GPO opened in 1861, marbling was one of the processes it boasted. The technique, however, has changed little since marbling’s beginnings.

One of the oldest forms of marbling is a Japanese version that lets nature move the paint before it is transferred to the book, Crotty said.

Marbling is done in a large tray about twice the size of a school lunch tray. The tray is about 4 inches deep and is filled with water and carrageenan.

Carrageenan is a seaweed extract used for its thickening and gelling properties.

“It’s used a lot in food. Josh likes to tell people that McDonald’s milkshakes are made mostly of carrageenan. It’s nontoxic. The idea is that it makes the bath thick and the pigments float on the surface,” Hurtt said.

Hurtt drips a mixture of acrylic paint and water onto the filled tray and the paint begins to spread out like oil on water.

Hurtt then uses different combs to disturb the paint on the surface. The comb is basically a 2 by 4 with nails hammered in. They almost look like the bottom end of a rake. Different combs have different sized nails, which make unique patterns.

“You get to make all these pretty things with stuff that looks like a torture device,” Crotty said.

The paint never mixes, but rather forms patterns on the surface of the bath. From there the marblers carefully dip the books into the bath to keep from messing up the pattern.

The pattern on the bath is transplanted almost exactly onto the book.

The excess liquid is wiped off and then the books are left out to dry.

GPO does marbled books about once per month, depending on what publications demand the procedure.

In the meantime, Hurtt and Crotty work on leatherwork, gold-tooling and other book crafts for the government. 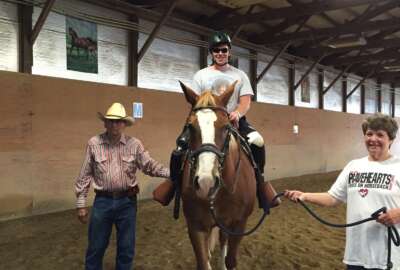 Recreational therapists give blind veterans a new look on life