OMB made the announcement Wednesday afternoon.

“We’re thrilled to have Michael join the OMB team,” Russ Vought, OMB’s acting director, said Wednesday afternoon in a statement. “He brings with him a wealth of experience improving how organizations function. This will allow him to hit the ground running at this critical time.”

Rigas will temporarily replace Margaret Weichert, who has been OMB’s deputy for the past two-to-three-years. She had announced her plans to leave government for the private sector in early March. But she stayed on for a few additional weeks.

“Over the last two years Mike has been one of the key drivers of the President’s Management Agenda, so he is the ideal person to carry the management agenda forward,” Weichert said in a statement. “I know he’s going to do great work at OMB working to improve the federal government’s service and stewardship for the American public.”

Both the OPM and the OMB positions have been plagued by acting leadership for years, well before the start of the Trump administration.

With his new acting appointment, Rigas will be the second person in three years to serve as the federal government’s personnel leader for two separate agencies.

Critics have said the co-mingling of the two positions has, in part, weakened OPM, as the agency has spent the past year dealing with uncertainty, low morale and the loss of experienced executive leadership.

Weichert served in both positions until last September, when the Senate confirmed Dale Cabaniss to be OPM’s new permanent director.

But Cabaniss suddenly resigned last week after six short months on the job, again over tensions with OMB and the White House. She too was frustrated with the administration’s continued pursuit of the OPM-GSA merger.

Rigas has since picked up the duties as OPM’s acting director in the last week. His name has been on a handful of memos from the agency in recent days, including new guidance for agencies on special hiring authorities and onboarding procedures during the coronavirus pandemic. 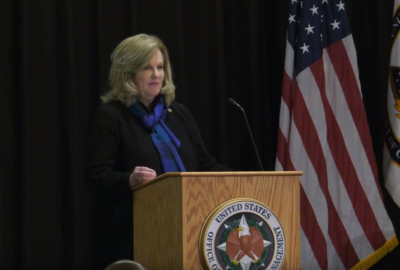