At over 130 pages, the Trump administration’s recent reorganization report is packed with ideas intended to streamline government.

Much of the attention has been focused on the merger of the Labor and Education Departments, reorganization the Office of Personnel Management and the possible privatization of the Postal Service.

But the Office of Management and Budget’s reorganization report includes 34 separate ideas and detailed justifications for each of them.

Below are four reorganization ideas from the...

At over 130 pages, the Trump administration’s recent reorganization report is packed with ideas intended to streamline government.

Much of the attention has been focused on the merger of the Labor and Education Departments, reorganization the Office of Personnel Management and the possible privatization of the Postal Service.

But the Office of Management and Budget’s reorganization report includes 34 separate ideas and detailed justifications for each of them.

Below are four reorganization ideas from the administration’s proposal that didn’t make as many of the headlines.

The administration’s reorganization proposal encouraged agencies to strengthen the quality of information they provide to OMB and about their activities and programs through multi-year “learning agendas.”

Agencies and their stakeholders should use these agendas to plot their evidence-based building activities for the coming years, the report said.

These activities are necessary, the administration wrote, because government lacks information on how well agency programs are working, and there are some programs that have no evidence demonstrating their effectiveness.

“We must increase the capacity of federal agencies to conduct evaluation and fill a critical gap in the federal government’s ability to generate evidence about what works and how we can improve programs,” the report said. “This will lead to more and better information that the Congress and the president can use to make decisions about how to best spend taxpayer dollars and provide services for our citizens.”

But the Office of Management and Budget offered administrative changes in its reorganization report, which it intends to ask agencies to act on.

Specifically, OMB is interested in having agencies designate a senior official to coordinate program evaluation activities at each organization.

Broader recommendations for the Homeland Security Department are tucked within the reorganization report’s appendix.

The administration recommended DHS headquarters and its components consider how the department produces intelligence and information.

Specifically, DHS’ Office of Intelligence and Analysis, the Office of Strategy, Policy and Plans and Office of Operations Coordination should discuss areas where their functions overlap or are fragmented.

DHS headquarters should continue its work to modernize department-wide financial systems and consolidate field operations, the report said. In addition to DHS, the administration encouraged several other agencies, including the Social Security Administration, State Department and Interior Department, to continue efforts to implement and enhance shared services and modernize outdated IT and human resources systems.

First, the Office of the Secretary of Transportation (OST) had both programmatic and traditional and management functions, and the department should could consider restructuring them, OMB said.

“Now that OST has performed these dual roles for several years, it is time to consider whether OST’s organizational design is optimal for allowing it to most effectively carry out its statutory responsibilities,” the administration wrote.

“While DHS receives useful intelligence reporting from current TSA programs and outreach, many other sector specific agencies who lead the collaborative process for other critical infrastructure security have shown they can collaborate to share intelligence as effectively as a DHS component,” OMB wrote.

The proposal also recommends moving all transit and rail grant funding functions, some of which are currently housed with the Federal Emergency Management Agency (FEMA), to DoT’s Federal Transit Administration.

The reorganization plan also proposes the creation of a non-governmental, public-private partnership that would bring together experts from a wide variety of disciplines, such as computer science, economics and design-thinking.

These experts would develop new approaches for government to interact and meet the needs of its citizens through a newly formed “Government Effectiveness Advanced Research (GEAR) Center.

“The center would provide the federal government with the opportunity to not only catch up to where the private sector services and capabilities are today, but to lay the groundwork for where government operations and services need to be in five, 10 or 20 years or more by bringing together researchers, academics, non-profits and private industry to inform leaders in the federal government of the future delivery models for programs and services that meet the needs of the American public,” the report said.

The General Services Administration would issue both a challenge under the America COMPETES Act and a request for information to collects ideas for the center. Depending on the results of the challenge, a university, think tank or other research institute could establish and house the GEAR Center, the administration wrote. 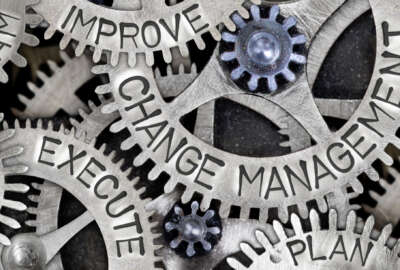