When a Homeland Security Department component charged with housing illegal immigrants before their court appearances was told to submit reports with information like age, gender, and marital status, they fulfilled that requirement — to the tune of 1,500 Word documents.

They certainly generated reports,” said Kevin Roney, a program manager at DHS. “Unfortunately the reports didn’t do anything for the biggest, basic problem; they were turning families away because they didn’t know how to house them while they still had capacity. It’s like going to a hotel and having rooms available because you can’t put people in the rooms.”

That’s a lot of people potentially being turned away. The Pew Research Center estimates there are about 11 million illegal immigrants in the United States. And while not all of them will end up in federal housing while awaiting their court dates, those 1,500 Word documents highlighted to Roney and the department that the agency needed an additional tool in its belt.

“They can now run an analytic tool that allows them to better organize their facility, rearrange it based upon trends or predictiveness of what that traffic might look like, in order to better maximize capacity of their space. Which for the taxpayers is a great thing, because we’re all paying for that infrastructure continually to do that,” Roney said during a panel event at the June 6 Qlik Federal Summit in Washington, D.C. “And then it gives folks — who in many ways have a lot of bad experiences in coming here illegally — a place to go to and get some very necessary medical care, food, clothing, all that kind of stuff that they’d don’t necessarily get. So there’s a lot of good things from that, and so this is where data really becomes important  in really how you really actually define those performance metrics that you’re looking for. In this case the performance metric they were missing was how do I optimize my facilities so I get the most families in here in the right organizations to get them the care that they need in the process.”

The difference between data and information is at the heart of the decision-making process, said Dan Tangherlini, former administrator for the General Services Administration, who also spoke on the panel.

And it’s something that you have to be aware of when moving along the “value chain,” from data collection and data analysis, to the actual generation of information and business intelligence.

“If you don’t emphasize improving the quality of that entire value chain, you can apply the best data analysis tools at the end of the line, and still end up with bad business intelligence if you aren’t starting with high quality data,” said Tangherlini, who currently serves as president and founder of SeamlessDocs Federal. “One of the maturation processes the federal government is going through … is really looking at that value chain and really applying the highest quality tools and highest quality thinking to how do you improve the outcomes of that chain.”

Tammy Tippie, director of performance management at DHS,  said the thing that’s missing from agencies driving better use of data, is a “disciplined decision-making system.”

Agencies can cull all of the data they want, but if it still goes into an intuitive decision-making model — which flows through someone’s head and no one knows how or why a particular decision was made— there’s no demand then for data collections because “everybody just shrugs their shoulders and says well, it doesn’t matter,” Tippie said.

Agencies that have thought about making the process transparent have made a lot more progress creating a demand for data-driven, evidence-based decisions,” Tippie said.

Defending against the ‘risk fear’

The panelists said when it comes to data analytics, other areas for improvement include access and ownership, measuring value, and what Tangherlini called “hyper-partisanship.”

This causes people in a program to want to stay with the status quo, Tangherlini said, because there’s no penalty for continuing to do what you’ve always done.

“Really where the change is going to happen is folks who are going to take a position of leadership, either at the secretary level or the program manager level, and say ‘look, I’m going to use agile practices to really explore what I’m trying to achieve,” Tangherlini said. “Start building measures that evaluate your performance against that achievement and then go back through that data value chain, from data collection through analysis through business intelligence; create that feedback mechanism.”

At DHS, Roney said it can be difficult to collect data because often it isn’t the department’s to begin with. The owners of that data can be afraid of what that information will be used for if it’s handed over to the department.

“It’s a risk fear, they’re fearing that somebody’s going to use the data against them in the organizations,” Roney said. “Unfortunately even inside the DHS realm, that’s still an issue as the organization is trying to mature itself being fairly relatively new as a federal agency.”

Tippie said another problem that organizations or agencies have when it comes to measuring data, is that they don’t stop to think about what it is they want to know — or why they’re measuring something.

“One of the things that we’ve tried to get organizations to do is take a breath on the front end, worry less about ‘get to measures now’ and spend a little more time on the ‘what is it that you really need to know’ to create the value proposition, and figure out how to measure that even if it takes you longer, to get to measures and figure out how to collect the right data and put it in the right systems.”

Getting behind data ideas

Despite the barriers to fulling embracing data analytics, Hudson Hollister, founder of the Data Coalition, said he was optimistic about the environment created by the new administration.

There’s been a slight boost in IT spending in the fiscal 2018 budget and there’s been more engagement from Congress on data analytics than ever before.

“If you’re here because you care about doing data analytics, and you want your agency management to care and sometimes you can’t get them to,” Hollister said, “you can tell them this White House and this Congress are behind those ideas.” 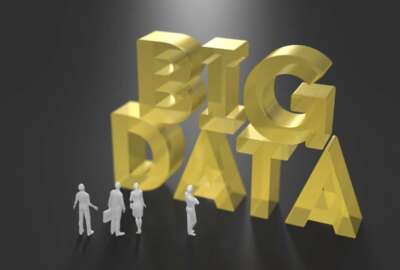