As the federal government looks to modernize the way it buys things, making the process faster and cost-effective, the General Services Administration is looking at ways to automate aspects of the automation process.

Jeff Lau, the acting regional commissioner for the Northeast and Caribbean region of GSA’s Federal Acquisition Service, says robotic process automation (RPA) could save the acquisition workforce from...

As the federal government looks to modernize the way it buys things, making the process faster and cost-effective, the General Services Administration is looking at ways to automate aspects of the automation process.

Jeff Lau, the acting regional commissioner for the Northeast and Caribbean region of GSA’s Federal Acquisition Service, says robotic process automation (RPA) could save the acquisition workforce from having to waste time on administrative “cutting and pasting” tasks.

Those automation tools, he said, could help contracting officers at a time when the workforce is shrinking.

“I’ve seen the workforce shrink over the last five-to-10 years. When I first started my career at GSA, there was a lot more opportunity to do training. Now we’re heads-down, doing the work, because if they’re not doing the work, who else is? I think there’s an opportunity for us to provide training with their freed-up time, to develop them into a more well-rounded acquisition workforce,” Lau said Tuesday at event sponsored by the American Council for Technology and Industry Advisory Council (ACT-IAC).

USCIS borrowed the concept from the Army, which has “Sgt. Star,” an AI assistant that answers questions on the service’s recruiting website GoArmy.com.

But at GSA, Lau said he thinks AI could give contracting officers more time to work on projects with a higher return on investment.

“From an employee engagement standpoint … I’m no longer spending most of my day cutting and pasting addresses or telephone numbers. I’m doing important, high ROI stuff, such as contract negotiations, engagement with industry and customers, and really making themselves a better contracting workforce. We all benefit from that,” Lau said.

For his first automation test case, Lau said he had his RPA tool do a validation of whether or not a vendor was eligible to do business with the government.

“We were able to have the bot pull a DUNS number from an offer, go to the website, run validation, print PDF results, drop it in an email,” Lau said.

Done manually, Lau estimated this task would’ve taken an employee about 15 minutes. But for the AI application, it only took 10 seconds.

For his second test case, Lau had the automation tool pull information from vendor offers on websites and populate them into a  pre-negotiation memo.

That process, Lau said, would’ve taken a contracting officer 22 minutes, but only took 20 seconds for the computer.

When he started out, Lau said he had zero funding. What he did have was a laptop and a free RPA software demo. Lau knew how the acquisition process worked, and he had a coworker on his team who took programming in college.

But pretty soon, his team got results.

“Over the course of 20-30 hours, we had tangible results. We developed two use cases using RPA software against our schedules program,” Lau said.

Lau’s team had a great proof of concept, but he needed to sell the idea to GSA management. And shortly thereafter, he got his opportunity.

“I ran this demo live, and I showed the software on the screen, pressed the ‘run’ button, and within 10 seconds, everyone’s email on their phones was buzzing. Everyone looked down and I said, ‘Check your email.’ And when they opened their email, the bot had sent them the results of the test,” Lau said.

Automation, Lau said, could really help his employees do their jobs better. But a lot of people, in and out of government, think automation could replace their jobs.

In order to assuage some fears, Lau ran his AI demonstration during a town hall meeting with his entire contracting workforce — the people whose jobs this would impact. After the demo, Lau said his employees were pretty happy with the results.

“The reaction wasn’t, ‘Oh my god, robots are going to take over.’ The conversation really was about what else can we automate. There are these pain points in my day that I have to do, and they’re required to do, but it’s really administrative in nature. And they were looking forward to that opportunity where they could focus on those higher ROI things,” Lau said. “Robotics isn’t going to take over their job. Rather, it’s going to augment the work. Having a digital employee sit alongside of them — not actually there, but in the systems, in the cloud — will make their life easier and they can do more challenging work.”

But AI isn’t the end-all-be-all.

“If you’re just taking a broken, old process and slapping RPA on it, all you’re going to have is a faster, broken process,” Herman said.

However, Herman added that automation does have the power to give contracting officers more time to do the job for which they’re paid.

“There’s a lot of focus on, ‘Are we automating people?’ We’re not taking people out of the process, we’re taking the robot out of the people themselves and freeing it up so people can focus more of their time on what they do best. … Once you take some of these menial tasks out of the way, once there’s already analysis already being done, that perhaps you had teams doing before, now it’s already taken care of, what are some of those other challenges at the table that now, with our limited resources, we can tackle,” Herman said. 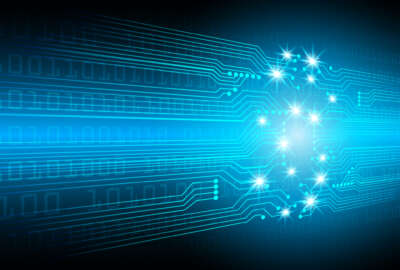 In federal IT, no harm borrowing ideas that work