A few observations as we approach the end of the year.

Members of Congress don’t seem so bad when you meet them individually. I’ve always found them earnest, talkative and decent-sounding. So why is the totality of the institution such a disaster?

An old horror movie concerned a haunted house. It had been built to be weird. The knowing owner explained to a female visitor that the house contained not a single perfect right angle. She replied, “When...

A few observations as we approach the end of the year.

Members of Congress don’t seem so bad when you meet them individually. I’ve always found them earnest, talkative and decent-sounding. So why is the totality of the institution such a disaster?

An old horror movie concerned a haunted house. It had been built to be weird. The knowing owner explained to a female visitor that the house contained not a single perfect right angle. She replied, “When you take all of those off-angles together, the house adds up to one big distortion as a whole.” I forget the plot or even the title of the movie. But I loved that line.

That’s Congress: Adds up to one big distortion as a whole. That leads to a certain consistent result: Congress does small things well on occasion. But on the big things, it almost always produces disaster.

The Data Act is an example of a relatively small thing. Pretty much everyone agrees with the notion of having all agencies report spending in similar, machine-readable formats. Fulfillment is way short of the goal, still, but it was a decent piece of bipartisan legislation.

When it comes to the big things — taxes, health care, the nation’s financial system — one big distortion as a whole. Big ugly bills only some really like and fewer understand seem to issue regularly like demonic spawn. The philosophic frameworks for these laws seem vague. The political bitterness is real enough.

This is the time of year when millions throughout the world celebrate miracles. Is it too much to hope Congress will find its adult self and do something rational on the 2018 budget?

When FORTRAN was cool code

Don’t ask me a question about popular entertainment. Pop music, movie and TV names are mostly peripheral blurs to me. I couldn’t tell Princess Leia from the Little Mermaid. But I did finally watch “Hidden Figures,” the story of three of NASA’s African-American women mathematicians in the early 1960s. It’s been out for a year. The film recalls a time when the word “computer” referred to a person. I’m not going to review it for you.

It may be a stretch to think managers at NASA didn’t realize you must program a computer to make it do something. But Dorothy Vaughan taught herself FORTRAN, leading to the first supervisory job for a black woman at NASA. Ms. Vaughan’s real life was wider and more compelling than the movie depicts..

The PC, Internet and mobile eras have made software a sexy and compelling route to fortune. But in reality it’s always been a sort of magic science.

FORTRAN might seem like a relic now. But in the hands of people like Dorothy Vaughan, it helped put men on the moon. (Obsolete? Sorry, Junior. Just last month, leadership of the FORTRAN community changed the name of the current version to FORTRAN 2018. So there.)

Peripherally, the film suggests how strong a force the federal government was in desegregation. Its antecedents go back to World War II, when Franklin D. Roosevelt ordered desegregation in the defense industry. The film is accurate in that NASA did move to end segregation within itself early in the space race.

Few challenges vex the government quite as much as excess real estate. Property has a lot in common with data centers. The government is always trying to get rid of it. But the count keeps going up.

But the General Services Administration has one new success story. It finally unloaded the contaminated and unsightly Bannister Federal Center. This South Kansas City eyesore has been vacant for two years. Its main occupier, the National Nuclear Security Administration, moved out in 2014. Now most of its 300 acres have become the property of a developer. A Chicago company will demolish the buildings and redevelop the site.

Bannister has a history. A lot of nuclear bomb component assembly took place there. Earlier it was a Pratt & Whitney engine manufacturing plant. At one time it was an automobile race track.

The Marine Corps will retain a small piece of the Bannister site for a data center.

Also a post-script to a column last week on the Homeland Security Department’s headquarters saga. I said the Center Building is a shell. It sure looked that way last summer when I visited the adjacent Coast Guard headquarters.

But a high-level DHS executive tells me the build-out is substantially completed. He says “the secretary and 800 of her closest friends” will be moving next January, 2019 that is.

Here’s a picture that shows progress. Maybe I was looking at another wing? 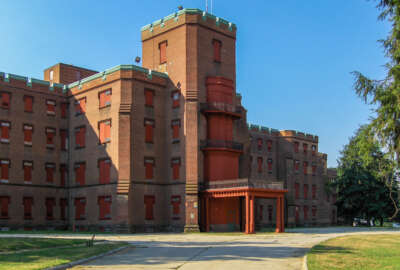 How not to build a federal building 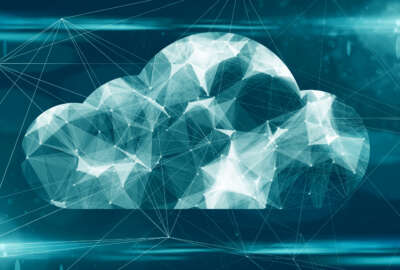 This agency tech shop is all-in for cloud computing 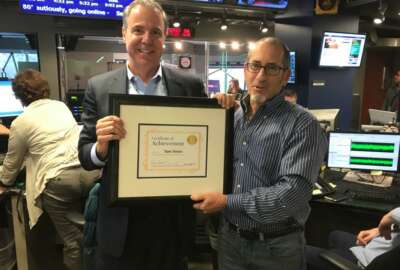