It’s been a year since Congress first passed the Veterans Appeals Improvement and Modernization Act and gave the Veterans Benefits Administration an 18-month window to implement the new program. The agency has less than six months now to stand up a brand new appeals process for veterans, many of whom have longstanding claims and have been waiting on a decision for years.

VBA has since published regulations, developed new IT capabilities and trained employees on the new system. Despite skepticism from critics, the department said it will be ready to fully roll out the new appeals program by the congressionally-mandated February 2019 deadline.

In the meantime, VBA is encouraging veterans who have pending claims now to opt into a new process: The Rapid Appeals Modernization Plan (RAMP). Veterans who choose to participate in RAMP can select one of two review lanes.

Nearly 50,000 vets are participating in RAMP to date, said David McLenachen, director of VBA’s appeals management office. Most veterans in the new program are receiving a decision within a 100-day average, he said.

VBA, however, still wants more veterans to opt in to the new program. It sees RAMP as an opportunity for veterans to get a decision on an appeal more quickly, and as a chance for VBA to prove itself while perfecting a relatively new process.

The agency is visiting local regional offices, talking to veterans claims attorneys and using social media to get the word out. It’s also mailed roughly 300,000 letters to veterans with an invitation to try the program.

Still, VBA acknowledged that convincing veterans that a new program could suit their needs. Many of them are accustomed to the previous, complex process for filing claim.

“When you’ve been in a process for several years and using it, you’ve invested a lot of time into it, it’s a very difficult choice to opt into something brand new,” McLenachen said in an interview. “We really need veterans to understand that they can benefit from opting into the RAMP program.”

Meanwhile, VBA is moving quickly behind the scenes to prepare for the program’s full roll-out in February.

VBA had told the House Veterans Affairs Committee back in July that it planned to complete roughly 35 percent of needed IT upgrades for a new appeals system by the end of the summer. VBA’s remaining IT work is expected to be done by December.

Sticking to a schedule

House committee members were skeptical of the new IT timeline. But VBA said VA’s Office of Information and Technology had done a more thorough analysis of the project and adjusted the schedule from there.

“We have a very high-level of confidence,” McLenachen said of VBA’s planned IT upgrades. “The teams that are working on the veterans benefits management system have been for a number of years. They’re very experienced, [and] they’ve worked together a long time. I have to rely on the information I receive from the IT officials, but they’re very confident that this team is going to deliver on time, and I have no reason to question that estimate.”

The department is also enlisting the U.S. Digital Service, which is developing other tools for both VBA and the Board of Veterans Appeals to help speed up the decision-making process itself for claims and appeals, McLenachen said.

VBA is designing new training sessions on the changes in the appeals modernization law and the new RAMP program.

“Part of that 18-month implementation period that Congress gave us allowed us time to develop the training that we need to include what we learned from running the RAMP program,” McLenachen said. “As we have lessons-learned in the RAMP program, we’re able to use that information to design the training that employees are going to need in the future, and that’s ongoing right now.”

McLenachen said 10 regional offices with 1,495 employees have been processing RAMP claims this past year. VA has requested funding for an additional 605 VBA employees for fiscal 2019, which McLenachen said will help the agency work through the new appeals program and address backlogged claims.

VBA is preparing for that hiring now, assuming the funding becomes available, he said. 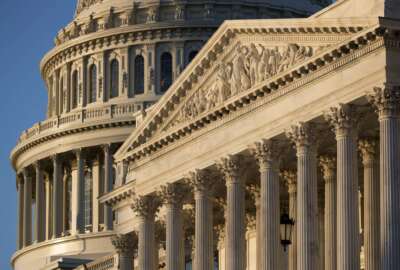 VA and DOD both bit; Congress asks, can they chew?