The guidance from the Office of Personnel Management follows an executive order from President Donald Trump, which he signed at the end of September. The order formally eliminated the National Council on Federal Labor-Management Relations and abolished any forums or pre-decisional involvement structures that agencies had put in place...

The guidance from the Office of Personnel Management follows an executive order from President Donald Trump, which he signed at the end of September. The order formally eliminated the National Council on Federal Labor-Management Relations and abolished any forums or pre-decisional involvement structures that agencies had put in place to work with union representatives.

Collective bargaining agreements that were in effect at the time the president signed the executive order will remain intact.

At the same time, agencies should remove any mention of these forums, partnerships or use of pre-decisional involvement (PDI) from collective bargaining agreements, OPM said.

“In revamping your strategy, following elimination of these forums, agencies should be mindful of the president’s finding that ‘labor-management forums have consumed considerable managerial time and taxpayer resources,’ but have produced few benefits to the public,” McGettigan said.

In addition, agencies should only use pre-decisional involvement practices if they find that doing so brings concrete and valuable results to the organization, OPM said.

OPM’s new guidance mentions the president’s decision that the council and agency forums have produced “few benefits to the public” on multiple occasions. Specifically, agencies must detail the costs of participating in labor-management forums and pre-decisional involvement during fiscal 2017, “including employee staff time and any other expenses, and a listing of any tangible benefits the agency has realized through use of such forums and/or PDI in previous years,” the OPM guidance said.

Agencies should also notify OPM if they intend to continue any labor-management forums. If they do, agencies should keep records of the costs associated with those forums.

All of these details are due to OPM by Dec. 22.

“It’s aggressive,” National Federation of Federal Employees Executive Director Steve Lenkart said of the guidance. “It’s one thing to rescind the order for the council, but it’s another thing to go further to say the councils were a waste of time.”

So far, the Veterans Affairs Department has pulled back its NFFE partnerships, Lenkart added.

Federal unions in the past have expressed some frustration that successful labor-agency partnerships often depend on the political whims of the current administration.

The OPM guidance that followed Bush’s executive order back in 2001 took a simpler approach than the agency’s most recent memo, and like the former president’s EO, it made no mention of the costs or resources agencies exhausted to keep those forums running.

“Section 1 of [the executive order] abolishes the requirement previously imposed on agencies to form labor-management partnerships and partnership councils, as well as the mandate to bargain on matters covered by [Title 5],” acting OPM Director Steven Cohen wrote at the time. “The order does not prescribe any particular approach to labor-management relations. Agencies have discretion under the Federal Service Labor-Management Relations Statute to adopt a labor relations strategy best suited to their own needs.”

The Nuclear Regulatory Commission, for example, worked with its local NTEU union to form a working group, which offered ideas on how NRC could move personnel to other agency functions to avoid reductions in force.

Lenkart said NFFE worked with Defense Department managers on the New Beginnings, the performance evaluation system the Pentagon rolled out this year.

“New Beginnings went further [and] faster because labor was sitting with management,” he said.

For the National Treasury Employees Union, OPM’s guidance contradicts the administration’s push to streamline and remove barriers to efficiency.

“NTEU believes these councils play a role in making each agency more efficient and effective by giving frontline employees a voice in agency operations,” union President Tony Reardon said in a statement. “They improve the labor-management relationship by keeping communications lines open and solving problems in the workplace before they worsen.” 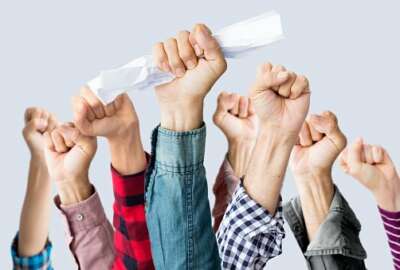