When it comes to the official time, there’s little that members of Congress, the Trump administration, and scholars and experts who study the topic, agree on.

But the one area they do agree on is despite attempts by the Office of Personnel Management to accurately report on official time, no one knows how many federal employees use it,...

When it comes to the official time, there’s little that members of Congress, the Trump administration, and scholars and experts who study the topic, agree on.

But the one area they do agree on is despite attempts by the Office of Personnel Management to accurately report on official time, no one knows how many federal employees use it, how much time they actually use and how much it all costs.

Majority members of House Oversight and Government Reform Committee, led by subcommittee Chairman Mark Meadows (R-N.C.), conducted their own study on official time in an attempt to get more accurate results. But they ran into similar problems that OPM has encountered for years when collecting agency official time data.

“The reality is that no one knows how much time and money is spent by the federal government on official time,” Trey Kovacs, a policy analyst with the Competitive Enterprise Institute, told the House Oversight and Government Reform Subcommittee on Government Operations Thursday at a hearing on official time. “In addition, the lack of transparency surrounding the practice makes it impossible to know what specific activities are performed by employees on official time.”

The Government Accountability Office has criticized OPM for the methodology it uses to conduct these reports in the past. Federal law doesn’t require agencies to track official time use and costs, and there’s no governmentwide standard that dictates how agencies should document that information. Because of this, GAO has said OPM’s totals may be higher or lower.

Leadership on the House oversight committee and Senate Homeland Security and Governmental Affairs Committee in January asked 24 agencies to provide names, positions, salaries and bonuses for employees who used official time in fiscal 2016 and 2017.

According to the majority memo, 12,508 federal collective bargaining unit employees used official time at one point in 2017.

Like the OPM report, the congressional study also relies on self-reported official time data from each agency.

Democrats on the House oversight committee, however, said the majority report has “significant flaws.”

For minority members, the 12,508 employees who used official time amount to a small number compared to the broader federal workforce of roughly 2 million. The Democratic staff memo also cited some confusion about the meaning of “100 percent official time,” questioning the validity of majority members’ statistics.

Majority members even acknowledged the data they collected from agencies was confusing, messy and inaccurate.

“I’m prepared to work with my Republican friends in trying to have more accurate data so we know what we’re dealing with,” he said. “That’s a totally fair point. But it has to work both ways. It can’t just be about the cost of the official time itself and how we calculate it. It also [has] to be some estimate of the benefits. What is the dollar value of the benefits?”

The subcommittee on Thursday heard from three witnesses, including two analysts from think-tank organizations and one independent consultant. No members of agency labor and employee relations offices and federal union leadership testified.

Congress established official time, West reminded the committee, in the Civil Service Reform Act of 1978. The CSRA determines that official time is in the public interest and describes the kind of work federal employees can use it for.

Yet Bob Gilson, a former federal employee and employee relations consultant who contracts with federal agencies to negotiate with unions, said bargaining unit employees are using official time to do more than what the law authorizes.

“No one in 1978, not even the unions themselves, would have believed that the cost of federal employee union representation would be entirely born by the taxpayer and that virtually all union dues would be available to those unions as discretionary funds,” Gilson said. “The taxpayer has paid many billions of dollars over the last 40 years for federal labor-union activity and growth. I, for one, don’t have a clue what they got for their money, because nobody knows what this actually costs.”

To be clear, not all federal employees must pay union dues, but those organizations are required to represent everyone.

Meadows, however, said he was amenable to the idea of official time. There are some employees, perhaps, who should spend all of their work hours on official time, he said.

The House included an amendment in the 2019 National Defense Authorization Act, which requires OPM to submit annual reports that describe what activities employees use official time for. The House passes its version of the defense authorization act Thursday. 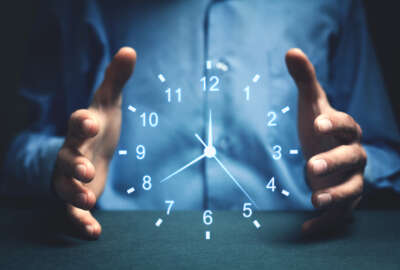 Everything you need to know about official time