After a four-month wait, the Senate Homeland Security and Governmental Affairs Committee moved forward with nominations for the top two positions at the Office of Personnel Management.

The committee voted Wednesday en bloc to move the nominations forward, which the full Senate will now consider.

Both Jeff Pon, the president’s pick to be OPM director, and Michael Rigas, the nominee for the agency’s deputy director position, have been in limbo for months.

After a four-month wait, the Senate Homeland Security and Governmental Affairs Committee moved forward with nominations for the top two positions at the Office of Personnel Management.

The committee voted Wednesday en bloc to move the nominations forward, which the full Senate will now consider.

Both Jeff Pon, the president’s pick to be OPM director, and Michael Rigas, the nominee for the agency’s deputy director position, have been in limbo for months.

“OPM made a substantial document production pursuant to the Chairman’s subpoena,” a spokeswoman for the Senate Homeland Security and Governmental Affairs Committee said in an email to Federal News Radio. “Based on the production, and OPM’s continued assurances of cooperation with the inquiry, the chairman intends to move ahead with the OPM nominations.”

The Senate committee made no other comments about the nominations Wednesday morning. The en bloc vote also included six other pieces of legislation and several postal renaming bills.

Johnson revived his concerns about OPM’s special ruling back in August. He said during October’s nomination hearing he had been waiting for at least four years for OPM to produce all documents related to the agency’s ACA ruling.

Johnson brought forth the same issue during former acting OPM Director Beth Cobert’s own nomination hearing in February 2016. Cobert, at the time, made similar promises to comply with the Senate’s request, but the chamber ultimately never confirmed her to a permanent position.

If the full Senate confirms Pon and Rigas, it will be the first time the agency has a permanent director in more than two years. OPM has been without a deputy director for longer — more than five years.

Kathleen McGettigan has been serving as OPM’s acting director since Cobert left with the change in administration last January.

If confirmed, Pon and Rigas will be responsible for OPM’s efforts to transform current hiring, pay and benefits across government and lead the creation of the HCBRM that it announced at the end of last year.

“OPM will create a government-wide employee digital record that will make government-wide HR data accessible in a secure cloud-based environment,” OPM acting Director Kathleen McGettigan said in the plan. “The employee digital record will include data from various stages in an employee’s career related to recruitment, training and development, performance management, pay and benefits, and retirement. Federal employees will be able to securely access their HR-related data — from recruitment to retirement — anywhere, any time. Agencies will spend less time manually processing HR transactions, and manually collecting and submitting data to OPM to fulfill low-value reporting requirements.”

Rigas was chief of staff for the Massachusetts Department of Veterans’ Services. He previously worked for the Heritage Foundation and the General Services Administration. 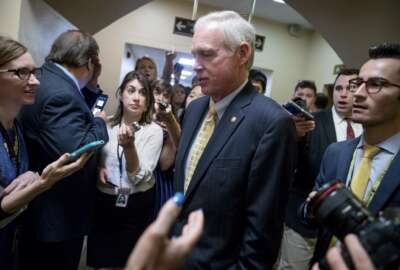