The President’s three workforce executive orders are back in court.

The U.S. Court of Appeals for the D.C. Circuit on Thursday morning heard oral arguments on the Trump administration’s appeal of an August decision from a federal district judge. The district court had invalidated nine key provisions of the President’s executive orders, largely overturning the administration’s attempts...

The President’s three workforce executive orders are back in court.

The U.S. Court of Appeals for the D.C. Circuit on Thursday morning heard oral arguments on the Trump administration’s appeal of an August decision from a federal district judge. The district court had invalidated nine key provisions of the President’s executive orders, largely overturning the administration’s attempts to limit official time and collective bargaining and set agency goals for expediting employee firing.

At the center of the court’s debate is whether the Federal Labor Relations Authority, an independent administrative agency that administers the labor-management relations program for the federal workforce, has the power to adjudicate the validity of the workforce executive orders.

The government revived two main arguments that it made last summer when the federal district court first heard this case.

First, it contended that unions should bring individual challenges about an agency’s specific implementation of the workforce executive orders to the Federal Labor Relations Authority, not a federal district court.

From the government’s perspective, it views the unions’ challenge as one that questions how specific agencies will implement the EOs’ provisions. If unions have a problem with how their agencies are implementing the orders, they should take it up with FLRA, the government said.

“You will see again and again and again allegations that [argue that] implementing these provisions will violate various ennumerated sections of the Federal Services Labor-Management Relations statute,” said Joseph Busa, an attorney representing the government. “That’s the [Federal Labor Relations] Authority’s statute. Congress said that those kinds of labor-relations claims have to proceed in front of the Authority. Taking this out of, say, the context of the President issuing an EO, this is really no different from a supervisor telling an agency negotiator what they’re supposed to do in these negotiations.”

Busa said if a union, for example, tried to  bargain over the hours that its employees could spend on official time, the agency would likely deny the attempt, arguing that the President’s workforce executive orders prevented the two parties from negotiating over the matter.

The union then could file an unfair labor practice complaint with the FLRA, Busa said. Unions could also seek judicial review in front of the Court of Appeals.

One of the President’s EOs had capped the amount of official time that an agency’s employees could use to no more than 25 percent of their working hours.

From Busa’s perspective, the unions have nothing to lose by taking their complaints over EO implementation to the FLRA.

But the unions disagreed.

“Not every action yields a final FLRA order,” said Andres Grajales, an attorney with the American Federation of Government Employees. “The [labor-management] statute vests the general counsel of the FLRA with discretion whether to bring an unfair labor practice complaint.”

The FLRA has been without a general counsel since the start of the Trump administration. The President recently nominated Catherine Bird, a lawyer with the Department of Health and Human Services who oversees negotiations with the agency’s union, to be the new FLRA general counsel.

But the unions claimed their argument is much broader. They said they’re making a “facial challenge” about the executive orders as a whole — and that the FLRA doesn’t have the authority to adjudicate the validity of the EOs.

In addition, the unions argued — as the district court did back in August — that the workforce executive orders themselves contradicted Congress’ intent when it passed the Federal Service Labor-Management Relations Statute in 1978.

That statute essentially prohibits agencies from bargaining in bad faith. The EOs, which the unions argued serve the purpose of a government rule, encourage agencies to bargain in bad faith, Gregory O’Duden, an attorney with the National Treasury Employees Union, said.

“Congress would have been very surprised to learn that it had taken the trouble to enact a comprehensive collective bargaining statute that the President could, with the stroke of a pen, cancel,” O’Duden said.

“Surprise? That’s not a legal concept, is it?” Randolph said.

O’Duden told the court that Congress had explicitly written the labor-management statute so that collective bargaining rights would be codified — and not subject to the whims of the President.

“Do you agree that the FLRA has authority to determine the validity of an executive order in the face of an argument that the executive order violates that the organic statute of the FLRA?” Randolph said.

Union lawyers and representatives after oral arguments expressed disbelief with the government’s view of FLRA authority.

O’Duden told reporters he was disappointed the judges spent much of their time on the administration’s claim over improper jurisdiction.

He expects the court may rule on the appeal some time near the end of June. 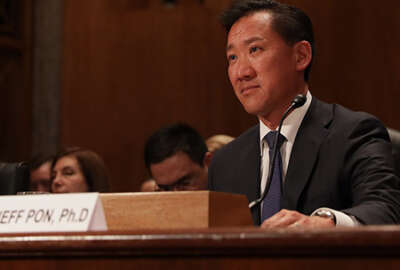