The Office of Personnel Management is assuring federal employee unions: their members will have access to new paid parental leave benefits by the upcoming deadline.

“OPM is committed to ensuring that federal government employees will be able to utilize this new benefit by Oct. 1, 2020,” Dale Cabaniss, the agency’s director, wrote in a March 9 letter...

The Office of Personnel Management is assuring federal employee unions: their members will have access to new paid parental leave benefits by the upcoming deadline.

“OPM is committed to ensuring that federal government employees will be able to utilize this new benefit by Oct. 1, 2020,” Dale Cabaniss, the agency’s director, wrote in a March 9 letter to the National Treasury Employees Union.

NTEU had expressed concerns with OPM’s upcoming implementation of the Federal Employee Paid Leave Act (FEPLA), which the president signed into law with much fanfare at the end of 2019.

But in a new letter to the union, OPM chided NTEU for raising its misgivings about the administration’s handling of the new paid parental leave law.

“Your letter appears to cast doubt on the Trump administration’s support for the Federal Employee Paid Leave Act,” Cabaniss wrote. “That is absolutely not the case. The Trump administration is committed to implementing paid parental leave for federal government employees in the same way that this administration was able to work with Congress to finally, after two decades, get this benefit enacted into law.”

The new law grants most federal employees up to 12 weeks of paid parental leave for the birth, adoption or foster of a new child. New benefits are supposed to go into effect Oct. 1.

But the paid parental leave law, as it currently stands, has its problems. The law inadvertently left out some factions of the federal workforce, including much of the Federal Aviation Administration, non-screener personnel at the Transportation Security Administration and medical professionals at the Veterans Health Administration, among others.

In a series of proposals submitted with the agency’s budget justification, OPM recommended legislation that covers all federal employees under the paid parental leave law, including those inadvertently left out in the original bill.

“A review undertaken by OPM staff identified a number of federal employee groups that were not covered under the new law,” Cabaniss said. “Further, as OPM senior career subject matter experts began to prepare the draft regulation necessary for implementation of the new benefit, they determined that OPM needed clarification from Congress on a number of issues to ensure that the benefit could be implemented in a manner consistent with the intent of the legislation.”

Foster care was one area where OPM sought more clarification from Congress. In its 2021 legislative proposals, OPM suggested “limitations” on the use of paid parental leave for foster care placements, which the agency described as a change that “recognizes that, in some cases, foster care placements may be designed to be for temporary periods of less than one year.”

In its Feb. 27 letter, NTEU expressed concern with the language, describing OPM’s rationale as worded in its legislative proposals as “simply wrong.”

“Foster children of any age are at a precarious time in their lives and to suggest that paid parental leave isn’t necessary because they aren’t permanent additions to the family is outrageous,” Tony Reardon, NTEU’s national president, wrote last month.

But OPM disputed the union’s claim and said agencies and Congress often identify legislative language that needs correction or clarification.

“OPM’s [congressional budget justification] provision in your letter was just that — an effort to request that Congress make a determination as to whether or not there is a need to provide greater clarity on specific enacted provisions,” Cabaniss said.

NTEU also raised concern with other OPM legislative proposals. The union, for example, questioned whether OPM would limit the 12 weeks of paid parental leave per child, even if both parents are federal employees.

But OPM disputed the claim.

“Each parent will have their own 12-week paid parental leave entitlement,” Anthony Marucci, an OPM spokesman, said in an email to Federal News Network.

In situations where the parents of a new child are both federal employees, families would have access to a total of 24 weeks of paid leave, he added.

Beyond raising concern over OPM’s written legislative proposals on the topic, NTEU also sought assurances the new paid parental leave law would be ready at the Oct. 1 deadline without delay.

“Your letter could lead federal employees to believe that this new important benefit is in jeopardy. That is simply wrong,” Cabaniss continued. “As director of OPM I can assure you that this agency and its employees are working tirelessly to ensure the successful implementation of this landmark benefit for federal government employees.”

OPM is expected to publish draft regulations on the implementation of the paid parental leave law in late spring, the agency has said. Only then will the public have an opportunity to read and comment on the benefits and their implementation.

Several members of Congress, meanwhile, have introduced a wide of variety of bills intended to cover employees originally left off the paid parental leave law.

House Oversight and Reform Committee Chairwoman Carolyn Maloney (D-N.Y.) also has a bill that would make many of the technical corrections needed to cover much of the federal workforce under the paid parental leave law. Rep. Carol Miller (R-W.V.) is a co-sponsor. 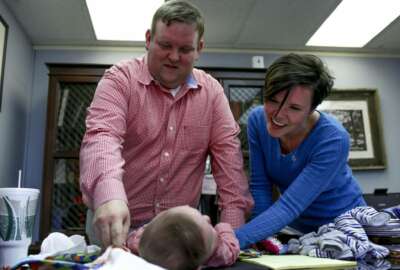