Several hundred employees at the Environmental Protection Agency announced this week they have “no confidence” in their leadership’s ability to keep them safe from the ongoing pandemic.

The American Federation of Government Employees Council 238, which represents EPA employees across the country, held a vote of no confidence with the agency’s leadership Monday night.

About 695 EPA employees declared they have “no confidence that worker health and safety is the top priority of EPA leadership” and no confidence that “EPA leadership can keep EPA workers, building services staff, their families and communities safe as EPA reopens offices before a safe and effective COVID-19 vaccine is available,” Gary Morton, president of the AFGE council, said in a letter to the agency’s leadership.

A few members from the National Treasury Employees Union and the International Federation of Professional and Technical Engineers also joined their AFGE colleagues Monday night in expressing no confidence.

“These are baseless allegations,” EPA spokesman James Hewitt said of the union’s concerns. “Reopening decisions are determined with the help of career EPA scientists and by examining guidance and orders of local and state officials. EPA has taken a number of measures and precautions to ensure a safer work environment that include giving worker flexibility to telework and cleaning work spaces.”

No EPA facility has moved to phase three of the reopening plan, the agency said in an email to Federal News Network. EPA facilities in region 7, which covers offices in Missouri, Nebraska, Indiana and Kansas, are at phase one.

All other EPA facilities, including its headquarters in Washington, D.C., are at phase two, the agency said. Most EPA employees can still telework under phase two.

But like some federal workers at other agencies, EPA employees say they’re worried about the prospect of moving to phase three under the agency’s reopening plan when much of the workforce is expected to return to the office.

Under EPA’s reopening plan, most employees would resume the telework schedules they kept before the pandemic during phase three. EPA managers are supposed to organize employees who work in cubicles or shared, enclosed office spaces into cohorts, which will trade time in and out of the office. Employees who are high risk for COVID-19 themselves or have vulnerable family members at home should work with their supervisors to set a more flexible work schedule.

A mediator is currently helping the agency and the union through collective bargaining negotiations over EPA’s phase three reopening plans, Joyce Howell, vice president of an AFGE local representing employees in Philadelphia, said.

Multiple EPA employees said Monday the agency wasn’t enforcing and requiring the workforce to wear masks at their cubicles.

The no confidence vote from nearly 700 employees represents a portion of the EPA’s workforce of roughly 14,500, but several employees have expressed frustration with the agency’s approach to reopening throughout the pandemic.

“Each day, more scientific research is documenting the very real threat posed by working indoors in poorly ventilated spaces. We are convinced that a premature return to work in our offices is an unnecessary risk to our workforce and their families,” Chris Gebhart, a union representative from EPA’s region 10 in Seattle, said. “Despite many unforeseen challenges we have served the public effectively and efficiently by teleworking since March 15. We simply ask our agency senior leadership to allow us to continue teleworking indefinitely, slow the pace of repopulating our offices and help us keep our families and communities safe until a safe and effective vaccine has been widely distributed.”

EPA developed dashboards for each of its facilities, which pulls in data from the U.S. Centers for Disease Control and Prevention and other sources. The data is supposed to show virus caseloads and hospitalizations in the area, giving facilities a green indicator if it’s considered “safe” to reopen.

EPA has repeatedly maintained that agency scientists have developed the dashboards.

But some EPA employees described them as “nothing but smoke and mirrors.” Andrea Medici, a chief steward for the NTEU local in Washington, said the agency had cherry-picked data and CDC criteria to display on the facility dashboards as grounds to move from phase to phase. She said the agency often ignored its own dashboard and moved to new reopening phases anyway.

The EPA employees acknowledged the no confidence vote may not carry much weight. But since federal workers can’t strike, employees said they still wanted to make a statement.

“We know what things are needed to safely return to an office: Masks, testing and vaccines. All those things are known,” said Brian Kelly, a union representative from EPA’s region 5 in Chicago and the Midwest. “This is politically driven. The tools that we have are things like this no confidence vote.” 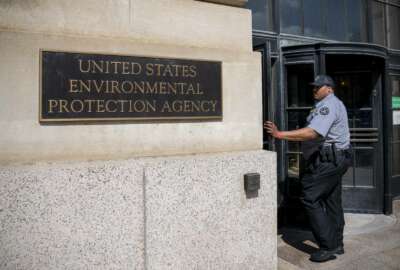