Can you spare $2 a day for a month, for a worthy cause?

It’s not too late to get on a 35-day challenge. The Federal Employee Education and Assistance Fund is looking for feds and supporters of public service to walk, run, swim, even roll your wheelchair for 35 miles, and you’ve got 35 days to do it. With details, Federal Drive with Tom Temin welcomed FEEA Executive Director Joyce Warner.

Tom Temin: Joyce, I congratulate you on trying to find a creative solution to the fact that it’s still a little bit early to have that in person 5K that you’re famous for. So, tell us about the 35-day challenge.

Joyce Warner: Yeah, well, so we are super excited for our 35-day challenge. This is FEEA’s 35th anniversary. And we’ve helped almost 60,000 families in that time. And as you know, we do normally have an event every year and honor Public Service Recognition Week. And so this year, we have developed a challenge that is starting on Public Service Recognition Week, but it is continuing till June 5. So it’s May 2 to June 5, but you can join anytime in that period. And we know that there are a lot of feds, and non-feds like me, who are looking to get more movement in their lives. And spring is a great time to do that. And as you mentioned, you could walk, run, bike, swim wheel, whatever you want, but try to do 35 miles in 35 days. And we know some people do a lot more than that. For some people, that’ll be like a good goal for them. You know, you could do a mile a day, you could do more on the weekends, whatever is best for you.

Tom Temin: You could even go downhill.

Joyce Warner: You could even go downhill. Although usually you have to go uphill at some point too, right?

Tom Temin: You have to get back up. Yes. I guess you can drive up and walk down and keep doing that or something if someone could follow you. Let’s back up for a moment, though. What has the demand looked like for FEEA services over the last year, more than a year now really?

Joyce Warner: Yeah. We have had a lot of demand across a number of our programs. We had families who we helped either where the fed passed away, unfortunately, or they lost a spouse or a child. We had a lot of people early on before those leave acts were put in place who were being told go home and quarantine and no pay for you. And so we helped a lot of those families. We distributed about 7,000 masks to feds very early on last year when you couldn’t get them. And they were being called back to work or they were front-line feds. And then in November, we started doing tutoring for feds kids, if the feds made under $100,000. And we’ve enrolled almost 10,000 children in that program.

Joyce Warner: Yeah. And so we have a partnership with this organization called tutor.com that has professional tutors in every single discipline. And they do it online. And it’s been super, super popular. And the best part for me is we get quotes from the kids because they’ll ask the kids afterwards. So. I have two favorite quotes. One is, “this person really knows how to explain this better than my mom.” And the second one is, “this tutor is really good and I think he deserves a raise and please listen to me, even though I’m the kid.” So, those are like my two favorite quotes that we’ve gotten so far from the kids in the program.

Tom Temin: What do they say? Fools, drunks, and children all tell the truth, so. That’s one-third of the of the truth coming in. And these are, by the way, it’s live tutoring, right?

Joyce Warner: Yeah. You share audio, or you can do chat. But there’s no video and that’s to protect the children. They don’t do video. But you can share screen. They have almost like a whiteboard, blackboard where you could do your math problems together. And you know, we are at the end of the school year, but we are accepting people into this program still. Finals are coming up. AP exams are coming up. Standardized tests for the states. So you can get to that at FEEA.org/tutor. And you can still enroll.

Tom Temin: Alright, we’re speaking with Joyce Warner. She’s executive director of FEEA, the Federal Employee Education and Assistance Fund. And on the flip side, how have the donations been coming in this year, given that there is unprecedented demand for your services?

Joyce Warner: We have had a lot of individual support, we always need more, because the demand is very, very high. And that’s why getting involved in the challenge at this time is really helpful for us. We’ve had 1,300, mostly feds, sign up to be part of the challenge. We have many corporate donors who have joined on to the challenge, including Blue Cross Blue Shield and WAEPA and GEHA, we’re excited about. And the feds are everywhere. I think we had everybody but Rhode Island, every state, including the territory’s and overseas station folks, in every agency. And one of my favorite things, Tom, is you can join yourself or you can make a team. So some of the teams are just friends or some of the teams are like agencies, right? And some of the teams have great names. So some of the teams were like a Wolf Pack, Bourbon Trail Crawlers, Jersey Girls, and then some of them are like team FAA, or the Chicago VA, which is fine. And so, you can do any of that and you can sign up FEEA.org/challenge.

Joyce Warner: Well, that’s not the pledge. Thirty-five is the enrollment.

Joyce Warner: Because we still have to pay shipping and t-shirt and all that stuff. And then we’re asking everybody to raise $35 on top of that. And you can do that through your friends, it has a great way it connects to Facebook. So you know, they have those Facebook fundraisers where people can just give a few dollars, and it goes back to your account. And so a lot of people just get it from their friends that way.

Tom Temin: Sure. It’s not like asking for you know, $1,000 because I’m riding my bicycle 10,000 miles or that kind of thing. A little bit more doable. All right, and just preview for us the programs that FEEA does offer. Besides the tutoring, there’s grants and loans and so forth?

Joyce Warner: I will. And then let me just say one more thing about the challenge that I want to mention, it starts this week. We’re also doing wellness Wednesday classes online if you’re a part of the challenge. The first one is on ergonomics and working at home, we’re gonna have yoga, mindful eating, meditation, stretching. So if you’re part of the challenge, you get a Zoom link to participate in that, you can ask questions, and there will be raffles. If you’re not, though, you can watch it on our Facebook page. And they’re all at either 12:00 or 1:00. And you can get to that on our challenge web page too, because we also want to give folks a way to kind of get some of these other helpful things going on in their lives. But back to your other question. Yes, we do emergency hardship loans. And those can be for people who have a personal medical issue. That is either the out-of-pocket costs are too high for them, or they’re on leave without pay. Disaster grants. We just spent a lot of time supporting federal families in Texas, many of whom the power outages, their houses just were not prepared for that type of long term freezing. Lots and lots of busted pipes. I have never seen, since I have been at FEEA, so many busted pipes from the freeze and no power. And we do scholarships. And so, our scholarship program for this year, as deadlines already passed, the new application will be out in the fall. And we usually give a little over 200 scholarships every year to children of federal employees and some feds going back to school themselves.

Tom Temin: Sounds exciting in the sense that you’re in touch with what’s going on. And you have a real ground level sense of what feds are going through. So, sad as it might be in some individual cases, it’s also exciting to be able to be close to where it is and not up in some ethereal policy level.

Joyce Warner: It’s true. And you know, we are able to do things quickly. I’ll tell you with the tutoring program, we were hearing the stress and anxiety of these parents. And we have a senior, our youngest at home, and it’s like, yeah, I can’t help you with a lot of your subjects either. And I had one woman call me from the IRS and she was ready to pull her hair out of her head. And quickly we got on the phone with Federal Long Term Care partners and then Blue Cross Blue Shield and later Care First, and they came together and said, we’re gonna help you support this tutoring for feds, and then it just exploded. We opened it Nov. 1, and we were up all night signing people up.

Tom Temin: Alright, sounds good. And we appreciate all the work you do throughout the year, throughout the decades, celebrating 35 years. And after the 35-day/35-mile challenge is over, then there is the Federal News Network Motorcycle Ride for Charity which benefits FEEA, and you’re going to help us out there too.

Joyce Warner: We are, I’m looking forward to it.

Tom Temin: All right, and that takes place on June 25. And there will be a signup link also. Joyce Warner is executive director of the Federal Employee Education and Assistance Fund. Thanks so much. 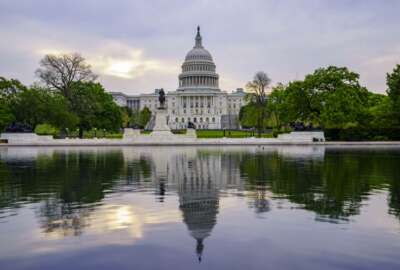