The rapidly increasing pace of natural disasters has taken its toll on the Federal Emergency Management Agency’s workforce, as has its internal culture. The Government Accountability Office documented staffing shortages, as well as trouble training and retaining reservists who respond to these disasters. And a RAND report — commissioned by FEMA and currently hosted on the agency website — published in late 2020 revealed that nearly one in five FEMA employees had experience harassment or...

The rapidly increasing pace of natural disasters has taken its toll on the Federal Emergency Management Agency’s workforce, as has its internal culture. The Government Accountability Office documented staffing shortages, as well as trouble training and retaining reservists who respond to these disasters. And a RAND report — commissioned by FEMA and currently hosted on the agency website — published in late 2020 revealed that nearly one in five FEMA employees had experience harassment or discrimination. But FEMA is trying to turn that all around.

For instance, Hooks said FEMA is now requiring sexual harassment training for all staff. The agency is also conducting listening sessions and exit interviews to hear employees’ concerns, and understand why they may be leaving.

“It has often been said that people sometimes don’t leave organizations, that people leave people,” Hooks said during the March 1 hearing. “And so we want to get out the heart as to why we are losing valuable employees. And I also think that as we improve the dynamics, the professionalism and the diversity of FEMA, that that will go a long way to ensuring that everyone feels that they are valued, that they have a place to thrive, whether they’re in a minority, majority, whether their gender, race or ethnicity, that FEMA is here to serve the American public. And to do it with distinction, and I will demand no less of anybody that works around me and with me.”

But Hooks also acknowledged that this is not a short-term fix, and will require continued accountability.

“But I recognize and I am very upfront and frank with the staff, that it’s not enough that we have a female visionary at the lead of the agency, or that I come in with my background and being an ethnic minority,” he said. “This is an American issue that we must take on together. And we’re up to that challenge. And I have a history of holding supervisors accountable throughout the ranks, to ensure that we have a healthy organization, because if we’re not healthy internally, we cannot begin to adequately implement programs described by Congress.”

Subcommittee Chairwoman Val Demings (D-Fla.) noted that between 2016 and 2021, FEMA increased the size of its female workforce by almost 8000 employees, which she called a “significant achievement.” But even with that, she said that FEMA still hasn’t reached its target levels. In addition, Rep. Bonnie Watson-Coleman (D-N.J.) said she’s seen information that indicates roughly 71% of FEMA leadership is white and male.

Hooks agreed there’s more work to be done. He said one initiative the agency has embarked upon is making direct hires within specific communities, and partnering with historically Black colleges and universities to establish a pipeline for more diverse candidates. He said FEMA is seeing an influx of more diverse employees at both the top and the bottom of its ranks; it’s the middle where that diversity has yet to penetrate.

“It’s not enough for the agency lead to be a female and for me to be a racial minority,” he said. “But I have seen at the top, that the appointments and the hires made, appointments by the president or the hires made by Administrator [Deanne] Criswell is that we have a very diverse leadership at present time, but that needs to transcend throughout the ranks, so that the middle has to meet what we see at the very top and what we’re bringing into our work.”

One of FEMA’s most pervasive staffing issues is the increasing number of natural disasters. Demings, in her opening statement, said that in the 1960s, the U.S. saw on average 18 disasters per year. In 2020, it saw 104 major disaster declarations, and 58 in 2021.

And FEMA’s role in responding to these disasters doesn’t end when the destruction is cleaned up.

“A large part of [FEMA’s] workforce, actually, is involved in long term recovery efforts from prior disasters,” Chris Currie, GAO’s director of Homeland Security and Justice issues, told The Federal Drive with Tom Temin in January. “Last fall, FEMA told me they had almost 1,000 open emergency or disaster declarations from the current or the past. So what that means is a lot of their people are actually processing recovery projects, rebuilding projects, all sorts of things from past disasters. The example I like to use is that Hurricane Katrina is still open as an administrative disaster from 16 years ago.”

The increasing pace and long administrative tail of these events means there is no more downtime between disaster seasons, Hooks said. And that leads to overwork and burnout among staff. To avoid this, FEMA supplements its full time employees with a surge workforce of reservists, much like the military does. But FEMA’s reservists don’t benefit from the protections proffered by the Uniformed Services Employment and Reemployment Rights Act of 1994 (USERRA) the way military reservists do.

USERRA protects a reservist’s civilian job in the event that they get called up for military service, or even training. It requires employers to reinstate reservists at levels of seniority and pay they would have achieved had their employment not been interrupted, and that employers make reasonable efforts to train or upskill reservists in order to ensure their time away does not diminish their ability to perform their jobs.

Hooks said because FEMA’s reservists lack these protections, it’s difficult to maintain them at a constant level of training and readiness. He said it’s also difficult to maintain a long-term, stable reserve force, especially with the current job market, because nobody wants to give up full time job security for a disaster response position with an expiration date. He said that FEMA does not have the authority to grant its reservists these protections either.

But Congress may be able to help here. The CREW Act would grant USERRA protections to FEMA’s reservist workforce as well. The Senate passed the bill on Dec. 8, 2021. It now awaits action by the House. 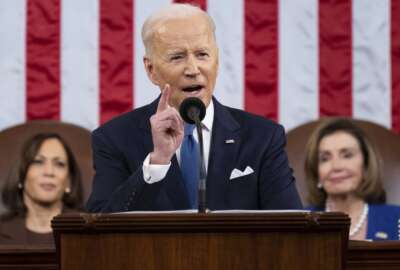 Biden lays out how administration plans to go after COVID fraudsters