The Army’s new diversity, equality and inclusion policy is getting high marks from personnel experts, but the specter of racism in all of today’s institutions creates an uphill battle in making the officer corps more representative of the country it protects.

The service released its new policy last week. It is a comprehensive X-ray sweep of every facet of the Army’s culture. It reviews governance structures, marketing, guidances, mentorship and leadership practices for potential bias....

The Army’s new diversity, equality and inclusion policy is getting high marks from personnel experts, but the specter of racism in all of today’s institutions creates an uphill battle in making the officer corps more representative of the country it protects.

The service released its new policy last week. It is a comprehensive X-ray sweep of every facet of the Army’s culture. It reviews governance structures, marketing, guidances, mentorship and leadership practices for potential bias. It also calls for listening sessions, better relations with minority professional groups and increased outreach to cities.

“The Army has long been forward thinking on questions of race and civil rights, and has been among the most integrated institutions in American life,” Brad Carson, former Defense Department acting undersecretary for personnel and readiness and professor at the University of Virginia, told Federal News Network. “They recognize it’s a continuing struggle to make sure the Army represents the diversity of this country. It is heartening that they are offering new policies, new ideas, in hopes of achieving that goal.”

Carson said the fact that senior leadership is paying attention in a hierarchical organization like the Army means a lot.

“People take their cues from the head nods of the people at headquarters,” Carson said. “That’s a very important thing.”

Bishop Garrison, director of national security outreach at Human Rights First, called the policy a step in the right direction.

“Particularly, as we talk about the retention and recruitment of persons of color throughout our services this gets at the heart of what the Army needs to do in order to ensure that it is the future fighting force that it purports to be,” he said. “They are asking questions like: What does our culture look like? What do our values instill? How can we position ourselves to ensure that we have the proper pillars as a part of the overall culture in place to remedy a lot of the issues that we’re seeing today?”

Part of what the Army wants to change is its overly homogenous senior leadership.

The military has 11 times more white officers than senior officers of color. Only eight out of every 100 officers is a Black person, according to the Congressional Research Service.  Only two of the 42 top generals in the military are Black.

In the enlisted realm leadership is much more reflective of national demographics, 63% of senior enlisted troops are white, while 19% are Black.

Some of the initiatives the Army wants to explore include “Urban Access,” which is “designed to improve minority representation in the Army from large metropolitan areas,” according to an Army document.

“The pilot began this summer and the intent is to conduct strategic officer recruiting from the greater Houston and Los Angeles areas,” the authors state. “The small team will engage Los Angeles and Houston target populations and influencers to actively promote Army officer opportunities through key physical and virtual networks. The goal is to achieve a more equal representation rate for volume in designated market areas.”

Another idea is to create an Army ROTC senior officer mentorship program.

“That was one of the most interesting reforms,” Carson said. “The mentorship aspect is a really critical one, that plays a huge role to get advice from people, say ‘here’s what you should do.’ And a lot of the academic studies that have been done, and there’s been a lot of work done about how to promote diversity, have talked about the role of informal networks in promotions, in guidance, and career advice. Establishing these kind of networks as the policy contemplates is really positive stuff.”

But, while the Army can make changes inside, there are issues outside of the military that may not make the playing field equal for Black Americans to reach leadership positions.

Criminal records, obesity and preexisting conditions all disqualify people from service or can cause them to have to leave the Army.

“When, I, as an African American, as a West Point grad and a veteran, take my uniform off, I am a black man in society,” Garrison said. “That is what society sees. That is how I’m going to be treated one way or the other. We have to find ways to affect our overall treatment and thinking of minorities, specifically, black men and women right now who are incredibly vulnerable, to be quite frank, in our communities at large.”

Former top enlisted airmen Kaleth Wright brought the issue to light in a Twitter thread after George Floyd was killed.

Despite his role in the Air Force, Wright said he could have just as easily been Floyd.

“There’s only so much the military can do internally and deal with on its own,” Garrison said. “It can deal with its own bias that it might have with within its structures, it can deal with its issue of white supremacy and white nationalism that we’re seeing continue to rise within the ranks. That’s something that leadership has to tackle. That’s one thing they can definitely do.”

The Army is also dealing with spilt decision making on race. The military expressed interest in changing names of bases honoring Confederates. The Trump administration then backpedaled that, with the president promising to keep the names.

The Trump administration is also taking aim at training that may acknowledge the existence of white privilege, while the Army is looking more closely at how backgrounds influence soldiers’ lived experiences.

“In one of my listening sessions, one of the soldiers said ‘When you say, “All I see is green” you don’t see all of me,’” the Army’s top enlisted soldier, Sgt. Maj. Michael Grinston, said last month. “The solider said ‘You don’t see when I take off my uniform and I go out that gate that people will treat me differently because of the color of my skin. You can’t see that when I go home that I’ve had a gun to my head 13 times since I’ve been in the Army.’”

Grinston said he no longer says “All I see is green” because only acknowledging someone is in the Army does not take into account the backgrounds and experiences of soldiers.

E. Casey Wardynski, Army assistant secretary for manpower and reserve affairs, said last week that he does not think any of the service’s trainings will run afoul of the president’s executive order. 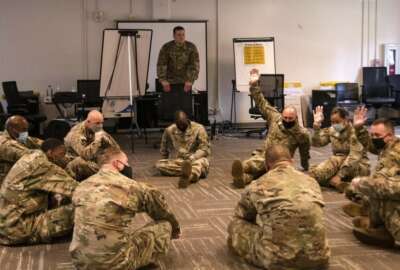