The Department of Health and Human Services’ Administration for Children and Families provides $60 billion in grants annually. Its processes, however, were stuck in the paper world and ripe for innovation.

Ben Goldhaber, the deputy assistant secretary for administration in the Office of Administration in ACF, said the bureau doubled down to re-engineer the business processes and...

The Department of Health and Human Services’ Administration for Children and Families provides $60 billion in grants annually. Its processes, however, were stuck in the paper world and ripe for innovation.

Ben Goldhaber, the deputy assistant secretary for administration in the Office of Administration in ACF, said the bureau doubled down to re-engineer the business processes and take advantage of emerging technologies to help better serve 3,200 grantees through 20,000 grant actions each year.

“The combination of technology like business intelligence, resource constraints and the notion of improving the quality of the experience for our grantees and our grants managers set the stage for us to take some hard looks at how to improve the entire environment,” Goldhaber said in an interview. “One of the three big portions of the things we are doing right now is looking at non-competing continuations. There are a set of processes that make up the award of grants in their subsequent year to their initial award. If you imagine a contract, this is like an option year. These are largely pretty safe in the grant award and there isn’t a whole lot of reconsiderations. That to us signaled the best reason to take a look. We had a high reason to believe that there was going to be predictability in the award of NCCs.”

Emily Mella, the chief experience officer in the Office of Administration in ACF, said they ran the technology in a sand box environment to see how it worked and to help get employees used to the change.

“We are taking machine learning and advance data analysis to identify, and our current target is about 98% accuracy, which awards in these non-continuation awards are likely to have substantive changes from the prior year and they made need a closer look by our grants staff,” she said. “Then we use RPA to streamline and automate the routine compliance checks. We think we can reduce more than one-third the time that grant managers spend on processing these grants to free up something like 160 hours per grant of time so they can focus on higher-value work, like actually supporting our grantees after award to make sure they are successful in actually delivering outcomes.”

She said the tools help identify which grants need reviews because of potential or real changes the grantee faced. The RPA tool does the rest of the effort by performing routine compliance checks to route those checks quickly through the process.

Goldhaber said about 66% of the $60 billion in grants are NCCs, so the potential time and resource savings through this automation is huge.

“The majority of what we are having the business intelligence do in this case are manual checks against corresponding databases,” he said. “They are not necessarily going to relieve the burden on grantees yet. That’s certainly our vision as we move away from things that don’t help us make good decision. But here we are automating things that are pretty automatable.”

Mella said ACF has been performing parallel testing over the past nine months to make sure the technology works correctly and the decisions comes out the same. She said the pilot will move into full production on or about Oct. 1, when fiscal 2021 begins.

Goldhaber said part of the goal of the pilot is to get employees to understand how the technology works and how it will help them.

“In designing the way we are talking about this, we were sensitive to federal staff may feel like part of their job was being outsourced to computers. Nothing could be further than the truth,” he said. “While some of the routine functions may be performed by modern technology, what it does is it provides a great deal more time for our federal partners and colleagues to really dig into thought-based work like financial oversight or spending more time looking at business cases for new awards.”

Mella said ACF targeted individual employees as well as broad communications about what changes are coming to the processes. For the most part, employees will just see the results of the technology tools versus having to deal directly with the RPA or machine learning software.

The Trump administration has been encouraging agencies to move in this direction through the President’s Management Agenda. The Office of Management and Budget estimated in 2017 that 5% of all federal occupations could be entirely automated, while 45% of all federal work could be automated.

HHS took on this grants modernization effort as part of the agency’s broader ReImagine effort. The department launched the effort in 2017 with a focus on using employee feedback to make six strategic shifts around things like generating efficiencies through technology and streamlining and enhancing the grant making process.

Goldhaber said HHS has been focused on improving the grant processes for the better part of three years, making this latest change less dramatic to most.

Along with the machine learning and RPA pilot, ACF is moving toward a risk-based approach to financial oversight.

“That enhanced oversight protocol is, in fact, what we would like people to spend more time doing as opposed to these manual tasks,” Goldhaber said. “To the extent we can free up between 120 and 160 hours per year, that’s more time people can help grantees solve their technical challenges.”

Mella added that the tools will ensure grant managers spend their limited time where it would be most impactful for grant recipients, while it also helps grantees be more successful to ensure funding is spent effectively on services. 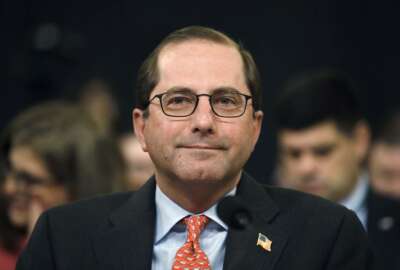