President Donald Trump is giving his Cabinet wide-ranging flexibilities for how to deal with his proposed budget cuts in 2017 and 2018.

Office of Management and Budget Director Mick Mulvaney told reporters March 15 that Cabinet secretaries will have more discretion as to how they implement lower discretionary budgets over the next two years than compared to previous administrations. This includes how to allocate personnel and how to move money among programs based on priorities...

President Donald Trump is giving his Cabinet wide-ranging flexibilities for how to deal with his proposed budget cuts in 2017 and 2018.

Office of Management and Budget Director Mick Mulvaney told reporters March 15 that Cabinet secretaries will have more discretion as to how they implement lower discretionary budgets over the next two years than compared to previous administrations. This includes how to allocate personnel and how to move money among programs based on priorities and how they’re working.

“We worked with agencies to adjust the numbers and gave them tremendous flexibilities,” Mulvaney said. “The top-line number will come down to the secretary to implement.”

When the president releases his initial fiscal 2017 and 2018 budget requests to Congress on March 16, specific priorities, such as defense, law enforcement and homeland security, will see increases, while other areas of the government, specifically the Environmental Protection Agency, the Department of Housing and Urban Development and foreign aid, will see corresponding cuts in discretionary spending.

Mulvaney said the defense budget category, not necessarily the Defense Department, will increase by $54 billion.

Mulvaney, who didn’t provide specific numbers for each agency, said DoD would see an increase of about 10 percent, DHS about 6 percent and NASA a cut of only about 1 percent.

“The reductions in many agencies are about trying to shrink the role of government, drive efficiencies and go after duplication,” Mulvaney said. “We worked closely with DoD, and are funding their needs in a responsible fashion. We asked them what they could spend this year. DoD said the amount they needed and could spend this year. We are not throwing money at a problem and then claiming we fixed it. DoD assured us they can spend the $54 billion increase.”

Other agencies, such as State, EPA and HUD, will have to make tough choices to deal with double-digit cuts.

Mulvaney said State would see a 28 percent decrease in its discretionary budget, mostly in the foreign aid area.

“The reductions in some cases are dramatic, like at the State Department, but it’s not a commentary on the president’s policies on State’s mission. It’s a commentary on their budget,” he said. “The foreign aid line items happen to fall in State Department functions. The president said he would spend less overseas and more at home. If those functions were at Education or Energy, that is where they would be reduced. We believe we have protected core diplomatic functions of State. The president believes strongly with what [Secretary of State Rex] Tillerson is doing. This is a reflection in the foreign aid program.”

At EPA, Mulvaney said the reductions are in programs that don’t line up with the administration’s goals.

“Expect reductions on global warming and alternative energy programs,” he said. “There are reductions and they are significant. Administrator [Scott] Pruitt has done a tremendous job prioritizing things. We worked with him on those areas. As for job reductions, we told agencies we will work with you. This is a different process. With the president’s budget, normally you will take reductions and that’s it.”

The American Federation of Government Employees Council 238 President John O’Grady said in an email that the budget release is a sad day for EPA. AFGE Council 238 represents EPA employees.

“The U.S. EPA is already on a starvation diet, with a bare-bones budget and staffing level. The administration’s proposed budget will be akin to taking away the agency’s bread and water,” O’Grady said. “This administration has decided that rather than becoming part of the worldwide solution to global climate change, the United States will regress environmentally behind a mantra of laissez-faire capitalism.”

And at HUD, Mulvaney said there are a lot of wasteful or duplicative programs where the government spends a lot of money with little or nothing to show for it.

“There are a lot of programs that can’t justify their existence and that is where we zeroed in,” he said. “I talked to Secretary [Ben] Carson and he has the ability to move money around. If he wants to move from one program into a new idea, he can have the flexibility to do that.”

Mulvaney also said that just because the administration is making cuts to infrastructure programs, it doesn’t mean they’ve changed their mind about funding bridges, roads and other nationwide areas.

Mulvaney said the initial budget requests for 2017 and 2018 are highlights for each agency, but do not include larger policy statements or revenue projections. Those, he said, will come in May.

Mulvaney offered a few specifics about the initial request, including the White House asking Congress for $1.5 billion for the southern border wall in 2017 and $2.6 billion more in 2018, and for a $30 billion supplemental budget for DoD. 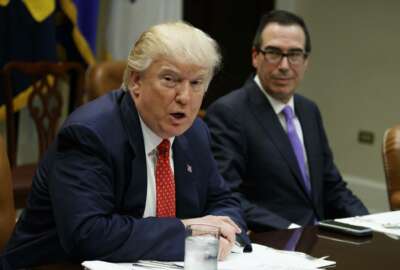 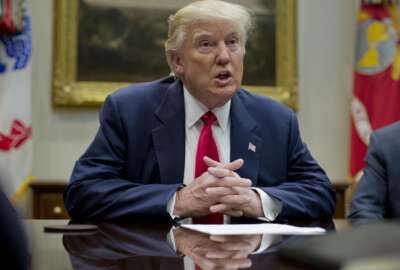