4 small details to know from the 2018 omnibus

President Donald Trump has signed the $1.3 trillion omnibus spending package for fiscal 2018 several hours ahead of the midnight deadline, thereby ending another threat of a government shutdown.

The Senate passed the budget early Friday, sending the bill to the president’s desk. In a Tweet early this morning, the president threatened to veto the omnibus spending package.

“I looked very seriously at the veto,” Trump said at Friday’s press conference. “I was thinking about doing...

President Donald Trump has signed the $1.3 trillion omnibus spending package for fiscal 2018 several hours ahead of the midnight deadline, thereby ending another threat of a government shutdown.

The Senate passed the budget early Friday, sending the bill to the president’s desk. In a Tweet early this morning, the president threatened to veto the omnibus spending package.

“I looked very seriously at the veto,” Trump said at Friday’s press conference. “I was thinking about doing the veto, but because of the incredible gains that we’ve been able to make for the military, that overrode any of our thinking.”

Trump ultimately reversed course, but he said he won’t do it again.

“I say to Congress, I will never sign another bill like this ever again,” he said. “No one read it.”

The budget includes a 2.4 percent pay raise for members of the military, the largest increase in eight years. It also contains nearly $1.6 billion for a southern border wall construction and technology.

Trump touted the boost for the Defense Department but expressed disappointment at many other aspects of the budget.

“I’m calling on Congress to give me a line-item veto for all government spending bills,” he said “The Senate must end the filibuster rule and get down to work.”

At more than 2,200 pages, the budget is chock-full of small details. Here are a few that may impact the federal workforce.

One provision in the 2018 omnibus prevents agencies from using appropriations funds to conduct reductions-in-force (RIF) using a specific piece of guidance from the Office of Personnel Management.

This guidance, which OPM finalized in 2008, allowed agencies to set up RIF competitive areas that only included pay-band positions and excluded wage-grade employees or workers covered under the General Schedule.

The 2008 OPM guidance gives agencies the option of establishing a competitive area to conduct a RIF using only pay-band positions. The new budget deal essentially reverses that rule — or makes it much for difficult for agencies to use it when RIFing employees.

The omnibus also gives agencies some flexibility to transfer unused funds to use for broad, governmentwide initiatives.

Specifically, the budget lets agency heads transfer or reimburse the General Services Administration any funds made available during the fiscal year or rebates from charge cards and other contracts to use in support of governmentwide IT modernization, procurement or financial projects, or management initiatives.

Agencies must get approval from the Office of Management and Budget. GSA will administer the transfer. They’ll work with inter-agency organizations, such as the President’s Management Council, Chief Information Officers Council and Chief Human Capital Officers Council.

Congress has 15 days to reject these transfers. Otherwise, agencies can move forward with these transactions on their own.

Departments and agencies must continue to make sure they live up to the law of the land — even as about 20 states and the District of Columbia have legalized marijuana for medical and recreation use, the omnibus said.

This provision isn’t necessarily new, but it reiterates current policy in the Controlled Substances Act, and perhaps serves as a reminder for federal employees as individual states alter their own policies on marijuana.

Agencies must “continue to administer in good faith a written policy designed to ensure that all of its workplaces are free from the illegal use, possession or distribution of controlled substances … by the officers and employees of such department, agency or instrumentality,” the budget said.

The budget also offers more details on federal training. Specifically, agencies can’t use appropriations for employee training if it “does not meet identified needs for knowledge, skills and abilities bearing directly upon the performance of official duties,” the omnibus reads.

Agencies must notify employees ahead of time of what kind of training they’ll offer and how it will be presented.

In addition, agencies must ensure that training isn’t offensive or designed to change their employees’ “personal values or lifestyle outside the workplace.” 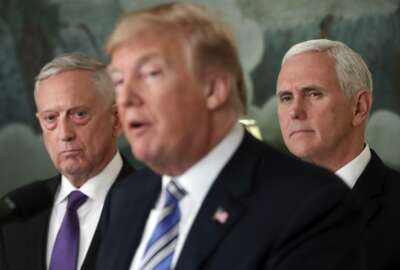 4 small details to know from the 2018 omnibus