The Utah congressman spearheading the effort to impeach the Internal Revenue Service commissioner said he wants to move “full steam ahead” and a censure would be a good first step.

Speaking to reporters outside the Sept. 21 House Judiciary Committee hearing on the matter, Rep. Jason Chaffetz (R-Utah) said while there’s enough support to pass censure on IRS Commissioner John Koskinen, there’s still “an education” to conduct on the subject of impeachment.

“I’d like to see him impeached, I think he’s earned it,” Chaffetz said....

The Utah congressman spearheading the effort to impeach the Internal Revenue Service commissioner said he wants to move “full steam ahead” and a censure would be a good first step.

Speaking to reporters outside the Sept. 21 House Judiciary Committee hearing on the matter, Rep. Jason Chaffetz (R-Utah) said while there’s enough support to pass censure on IRS Commissioner John Koskinen, there’s still “an education” to conduct on the subject of impeachment.

“I’d like to see him impeached, I think he’s earned it,” Chaffetz said. “But at a minimum I think he should be censured.”

Chaffetz’s comments reflect what the judiciary committee’s Republicans voiced during the the more than 3-hour hearing, where Koskinen was the sole witness.

“I accept that it is up to you to judge my overall record, but I believe that impeachment would be improper,” Koskinen said in his testimony. “It would create disincentives for many good people to serve and it would slow the pace of reform and progress at the IRS.”

Chaffetz first called for Koskinen’s impeachment in July 2015, when he and 51 members of Congress sent President Barack Obama a letter asking that the President dismiss Koskinen for obstructing a congressional investigation into the agency’s targeting of conservative political action groups.

In October 2015, Chaffetz introduced a resolution asking for the second time for Koskinen’s removal.

“I responded honestly and in good faith as events unfolded, particularly in response to the discovery that Lois Lerner’s hard drive had crashed in 2011,” Koskinen said. “From the start, I directed IRS staff to cooperate fully with Congress and to recover lost information wherever possible, and I testified to the best of my knowledge. But the truth is we did not succeed in preserving all the information requested and some of my testimony later proved mistaken. I regret both of those failings. I can also tell you, with the benefit of hindsight, even closer communication with Congress would have been advisable.”

But those failings are where lawmakers draw party lines.

While Republican judiciary committee members drilled Koskinen on details of his leadership and communication with Congress during the investigation, Democrats asked the commissioner questions on tax laws and political candidacy — a thinly veiled attempt to take shots at Republican presidential candidate Donald Trump.

“The Senate Finance Committee, the Dept of Justice and the Treasury Inspector General for Tax Administration have all looked into the accusations against you and each of them has independently concluded there is no evidence to support these charges,” said Rep. Jerrold Nadler (D-N.Y). “Your critics have not made their case, nor do they have the votes to force impeachment on the House floor, and these proceedings are an obvious sham.”

Koskinen said when he took office he had been assured the document retention request had been explained to agency workers, and in a followup memo in February 2014, “I was assured it would make it clear to employees and managers everywhere to preserve documents.”

“We were at that point 8 months into a massive document search,” Koskinen said. “It seemed to me everybody would understand the goal, and instruction to people was producing all of the information as quickly as we could, wherever it was.”

It apparently, Koskinen said, did not reach two employees on a midnight shift at an IRS office in Martinsburg, West Virginia.

But a year later, the commissioner found out that backup tapes were erased  in March 2014 by IRS workers in Martinsburg.

“At the time that was revealed, which was a year after the hearings in 2014, I said that was a mistake, it shouldn’t have happened, and I took responsibility for it,” he said.

“The old midnight shift guys in Martinsburg excuse,” said Rep. Jim Jordan (R-Ohio). “One month after your top counselor learns Miss Lerner’s hard drive is crashed and there are missing emails, the backup tapes … are destroyed. Those backup tapes were supposed to be destroyed months and months beforehand. So they were supposed to be erased two years prior to the date that they were, but they somehow survived. And then exactly one month, 30 days after your top counselor …  and senior management learned that the primary source, the emails are missing, these backup tapes that have survived for two years suddenly get destroyed. And we’re supposed to believe that’s just a coincidence? That just happened by chance?”

Wednesday’s hearing was scheduled last week after a Republican deal to forego a vote on impeachment, the Associated Press reported.

The AP reported that conservatives predicted the impeachment effort would meet opposition from both sides of the aisle.

While an impeachment vote is still possible, it’s unlikely to happen before the November election. Congress is also still working through the fiscal 2017 spending bill, which has a Sept. 30 deadline.

“No matter how we feel about a particular official, no matter what we think of his or her agency, successful impeachments are bipartisan efforts, and partisan attacks cloaked in the impeachment process are doomed from the start,” said Rep. John Conyers Jr. (D-Mich.). “The effort to impeach Mr. Koskinen is destined to fail on both the merits and as a matter of process. And if they somehow force this measure to the floor again, I fear it will set a terrible precedent.” 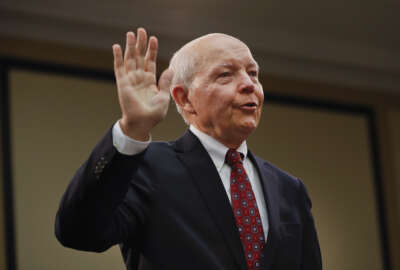 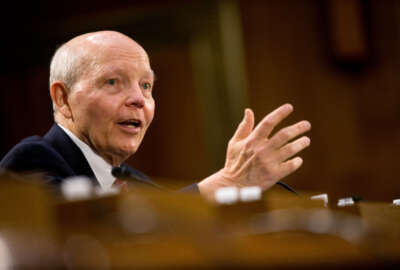