Though it’s unclear when exactly he might leave office, the departure of Utah Rep. Jason Chaffetz will leave the top spot on the powerful House Oversight and Government Reform Committee up for grabs.

Whoever takes his place as committee chairman will have the opportunity to leave his mark — as Chaffetz has — on both legislation that could impact federal agencies and the employees who work there and on the committee’s investigative approach to oversight of the Trump administration.

“It’s a different job when you have a Republican Congress and a Republican White House,” said Mike Hettinger, who served as a staffer on the oversight committee when former Rep. Tom Davis (R-Va.) was chairman during the George W. Bush administration. “That’s the challenge that the next chairman of oversight and government reform faces and the current chairman … faces, how do I balance the need to do effective oversight to make sure that agencies are doing the things that they should be doing and that we’re doing things that lead to efficient and effective government, knowing that I don’t want to hit them necessarily too hard, because they are the President of my own party?”

Chaffetz has received some harsh criticism from his own constituents and drew ire from Democrats for not investigating President Donald Trump and his business holdings and tax returns.

Yet Chaffetz will leave his mark on the committee in other ways. He led a nearly two-year investigation into former Secretary of State Hillary Clinton’s use of a private email server.

He championed a new administrative leave policy for federal employees in his chamber, which Congress ultimately passed late last year in the 2017 National Defense Authorization Act.

He and the committee’s majority members published a report last year on the data breaches at the Office of Personnel Management, which blamed the agency’s “failure of culture and leadership” on the loss of personally identifiable information from 21.5 million people.

Chaffetz launched a few investigations on federal employee and Senior Executive Service pay and bonuses in recent years and also introduced a slew of different bills attempting to crack down on official time use, agencies’ accountability procedures and probationary periods.

Yet regardless of the committee’s leadership, it has an opportunity to shift focus, Hettinger said.

And with the Trump administration’s plan to reorganize government and restructure the federal workforce, the possibility for Congress to drive reform is closer than perhaps it has been in recent years.

“There’s a great opportunity to really dig into the reorganization plan,” Hettinger said. “All these agencies are going to have to put forth workforce reduction plans. They have to come up with ways to save money and cut back and better leverage IT and all those things. There’s a great opportunity to do oversight of that in a bipartisan, nonpartisan [and] constructive way.”

Regardless of Chaffetz’s departure date, here are a few possible contenders for the chairmanship.

Both Reps. Jim Jordan (R-Ohio) and Trey Gowdy (R-S.C.) may seem like logical candidates for the chairmanship, Hettinger said.

Jordan has been a member of Congress since 2007.

He helped found the House Freedom Caucus and served as its first chairman in 2014. Jordan is the chairman of the Oversight and Government Reform subcommittee on health care, benefits and administrative rules.

Jordan has been a prominent figure in the effort to impeach IRS Commissioner John Koskinen and had led members in several attempts. Most recently, he, Chaffetz and a few dozen other members wrote to President Donald Trump calling for Koskinen’s impeachment.

Gowdy has been in Congress since 2011. Most notably, he served as the chairman on the House Select Committee on Benghazi.

He’s a member of the Oversight and Government Reform Committee and serves on its intergovernmental affairs subcommittee. He also serves on the Select Intelligence, Judiciary and Ethics committees.

“It does come back to the question of whether Gowdy or Jordan would want to put themselves in that position of having to potentially investigate some of the actions of their own party,” Hettinger said.  “It’s a lot more fun to be on Oversight and Government Reform in the majority when the White House is of the opposition party.”

An unconventional pick and a dark horse

Hettinger suggested Rep. Justin Amash (R-Mich.) could be an “unconventional” choice to be the next chairman.

Amash has been in Congress since 2010. He’s a member of the House Oversight and Government Reform subcommittees on IT and national security. He also leads the House Liberty Caucus.

“He’s a libertarian,” Hettinger said of Amash. “[He’s] willing to stand up for the institution. If you follow him on Twitter or any social media, you’ll see a lot about, ‘this isn’t about being a member of a party, this is about making sure that our country is running effectively’ and things like that. It would be an interesting choice.”

Amash shows a deep commitment to the issues he cares about, regardless of party lines, said Liz Hempowicz, policy counsel for the Project on Government Oversight. Hempowicz said POGO’s suggested candidates are based on its own experiences working with those members on oversight topics.

Turner once served as a subcommittee chairman on the Oversight and Government Reform during the 109th Congress. He’s no longer serves on the committee.

Many expected Turner would earn the chairmanship in 2015, Hettinger said.

“He could reclaim his seniority if he were so inclined and make a play for the chairmanship,” Hettinger said.

Turner has been in Congress since 2002 and serves as a subcommittee chairman on the House Armed Services Committee and a member of the House Permanent Select Committee on Intelligence.

Both Reps. Mark Meadows (R-N.C.) and Will Hurd (R-Texas) lead subcommittees on Oversight and Government Reform.

“Meadows and Hurd would be great choices,” Hettinger said. “From a seniority standpoint, neither one has been in Congress long enough to jump over a Jordan or Gowdy.”

Republican leadership typically recommends a member to service as the chairman of the committee, but seniority also plays a role.

As chairman of the IT subcommittee, Hurd is a champion of efforts to modernize federal legacy technology systems and has been a strong, knowledgeable voice on cybersecurity issues but has only been in Congress since 2015.

Now in his third term in Congress, Meadows leads the government operations subcommittee. He’s been a staunch supporter of limits to official time and a proponent of postal reform.

“He’s demonstrated a commitment to oversight, especially in his own party,” Hempowicz said of POGO’s work with Meadows.

Meadows is also the chairman of the House Freedom Caucus.

“Many people would regard him as fairly partisan, [with] the House Freedom Caucus [and] a different approach to how he thinks the government should run, but yet as chairman of the subcommittee, he’s looking at the critical issues that affect the federal employees and contractors,” Hettinger said.

Meadows has spoken often of his visits to federal agencies, and federal unions have said they’ve had positive discussions with him in the past. 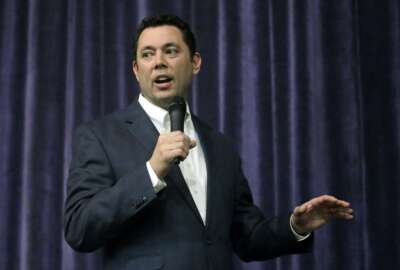