After the U.S. and its territories were slammed by natural disasters ranging from catastrophic hurricanes to deadly wildfires this year, one law is coming to the forefront of emergency response talks: the Stafford Act.

The nearly 29-year-old bill was created to bring a systematic way for the federal government to assist state and local governments during a natural disaster.

But as the U.S. braces for the possibility that hurricanes like Harvey, Maria and Nate will become the rule rather than the exception due to changing climates, lawmakers and government officials are rethinking some of the provisions in the Stafford Act.

One provision of the law that Federal Emergency Management Agency Administrator Brock Long thinks needs to be changed is section 404, the part of the bill dealing with disaster mitigation.

“The problem with the way the system is established is you have to get hit to have an extraordinary amount of post-disaster hurricane grant mitigation funding. I believe that’s not the right way of doing business,” Long said, during an Oct 31 Senate Homeland Security and Governmental Affairs Committee hearing. “The 404 money, it would be amazing if we could work with the Senate and this committee to move that to the front side. On average, I believe we put out $700 million or $800 million in post-disaster mitigation funding. Why are we not doing that on the front side and get it out of recovery and reduce the complexities of recovery and put it up front?”

Section 404 funding gives the federal government money to relocate people, protect undamaged buildings or stimulate future planning. The problem is an area must be hit by a disaster first before it can receive funding.

That poses a problem for areas like Sacramento, which according to The Washington Post, has amassed $21 billion in needed repairs for its levees and other flood defenses.

The article stated Sacramento has 1.3 million residents and $80 billion in property located in the flood plain, with the population expected to grow by 70 percent in the next 50 years.

Sen. Jon Tester (D-Mont.) said the change in the way funding is allocated is a “no brainer” and asked Long to submit legislative proposals to the committee.

Tester said every dollar spent on the front end of a disaster saves $4 on the back end.

Puerto Rico is dealing with the issue in real time. Maj. Gen. Donald Jackson, the deputy commanding general for Civil and Emergency Operations for the Army Corps of Engineers, told the committee Puerto Rico was dealing with a failing power grid before the storm.

About 70 percent of the island is without power six weeks after Hurricane Maria hit.

The U.S. is now using the Stafford Act to fix the power grid.

Long said section 404 isn’t the only area he’d like to see changed in the Stafford Act, especially in regard to Puerto Rico.

“I’m always for bettering and reviewing processes,” Long said. “There are opportunities of mitigation as a process of going through this, but rebuilding a grid in the way we are discussing is not in my authority. I’m concerned about the deferred maintenance issues already when it comes to restoring and conducting permanent work as it is.” 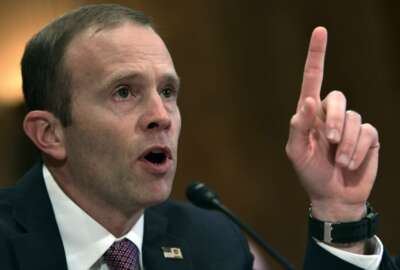