Tom Temin: And Mitchell, what is the situation as we open a week now that everyone’s had a weekend to contemplate the horrors in Afghanistan?

Mitchell Miller: Well, as you can imagine, there is a lot of tension actually among lawmakers even though they are not physically here. House Minority Leader Kevin McCarthy late last week at the end of the week, right after the deadly attack in Afghanistan, really, really upset – as upset as I have ever seen him speaking out related to what had happened related to the military veterans. It’s interesting because as you know, those who have served in Congress for a long time, it was really the majority of the lawmakers here had military service but now the number of veterans in Congress is actually the lowest it’s been since World War II. Roughly about 90 lawmakers out of 535. At one point it was three-quarters of the members had some type of military service. But as you noted, those who do have military backgrounds from both parties have made their views loud and clear during this withdrawal and evacuation. Republicans and Democrats critical of the administration say they were warning for months about issues that have developed in the waning days of the US military presence in Afghanistan. They say they had warned both former President Trump and President Biden about issues involving security and the Taliban. And for many of these lawmakers, this issue has been very personal. So personal, in fact that as you know, Massachusetts Congressman Seth Moulton, a Democrat, and Michigan Republican Peter Meijer went on their own to Afghanistan last week, and got in some trouble with House Speaker Nancy Pelosi, who criticized them and also warned others not to do the same. But some lawmakers, while critical of them say they understand why they wanted to see what was happening on the ground. But including some of the other lawmakers that don’t have military backgrounds, they have also been working hard to not only get Americans out, but Afghans with those special immigration visas out of Kabul. And of course, many of them have been flown here in our area to Dulles International Airport to be processed at various military facilities, including Quantico, Fort Lee and Fort Pickett in Virginia. So a lot of lawmakers involved in this process as we eventually move out of Afghanistan after 20 years.

Tom Temin: And of course, this is a reminder of the need for some level of national defense. And Wednesday, there’s a markup of the defense bill in the House.

Mitchell Miller: That’s right. And there are hundreds of amendments literally before the house or Armed Services Committee. They’ve been filed. And a lot of them will relate to Afghanistan. As you might imagine. Various lawmakers have things that they want to do, whether it’s accountability for military equipment in Afghanistan, or making sure that the funds go where they need to go to help people out. This bill overall is close to $716 billion. And that’s just about $1 billion over the administration’s initial request. It does include a 2.7% pay raise for all troops next year. And that’s pretty much in line with what it’s been in recent years. But really, this is just going to be the starting point of a lot of activity related to not only the defense bill, but a lot of other bills coming down the pike.

Tom Temin: We’re speaking with WTOP Capitol Hill correspondent Mitchell Miller. Then beyond the defense bill, there is the $3.5 trillion budget resolution. Now there’s a Sept. 15 deadline – what can we expect relative to all of that?

Mitchell Miller: Well, it’s really interesting, because before the House broke after their two-day session, House Speaker Nancy Pelosi did outline that she wants all the committees to be ready and on board with this $3.5 trillion budget resolution by mid September. And then of course, the House doesn’t come back until actually the 20th. So that does not give them a lot of time, because in the midst of all the wrangling over what was going to happen with the $1 trillion bipartisan bill which moderates pushed Pelosi to say they wanted to vote on, ultimately they agreed that they would try to get a vote by Sept. 27, on the smaller infrastructure bill, the “hard” infrastructure bill – if you will – as opposed to the “human” infrastructure bill. So to get all of that tied up together, and then try to figure out which bill is actually going to be voted on first, it’s going to be very, very interesting to see how Democrats juggle this. And we saw some of the high wire act last week when. just to get through the basic budget resolution, they had to do a little bit of strategery, if you will, from the legislative standpoint, where they basically voted on the budget resolution without making a standalone vote on the $1 trillion bipartisan bill just to kind of appease the moderates within the Democratic Party. And then of course, you have the progressives who still want A lot more money in connection with that $3.5 trillion budget resolution. And of course, you still also have the Senate to deal with. And there are senators, as we’ve talked about, who are not real thrilled with that top line figure, people like West Virginia Sen. Joe Manchin and Arizona Sen. Kyrsten Sinema, who want to bring that down a bit. So a lot of things to juggle here for the House and Senate leadership coming up in the next few weeks.

Tom Temin: And has anybody on Capitol Hill looked at this bill, which is really the dream of Bernie Sanders, if nothing else, it’s the best way to describe it – what effect it would have on the federal bureaucracy and the capacity of the government as it stands to carry out these massive programs that are envisioned?

Mitchell Miller: Well, right now, that’s a big concern, especially among Republicans who sharply oppose this bill, that basically they’re saying, there isn’t enough within the federal government to get all of these things done, whether it’s expanding healthcare or education programs, talking about pre-K universal attendance for kids, or whether it’s two years of tuition, free community college, a lot of agencies are going to be asked to do a lot more. And that’s what one of the biggest concerns is among the GOP. Now, on the Democratic side, they say they’re going to have enough money to do all of this. But I would suspect that within a lot of these federal agencies, there’s a lot of concern about yes, well, maybe we’ll get a lot more money but how is it going to be all meted out? And just as one example of what happened previously, we had the whole discussion about what was going to happen with rental and evacuations. We had a Supreme Court decision that went against the Biden administration, but a lot of lawmakers point to the money that was funded to help people getting rental assistance. And by one account, close to 90% of that money hadn’t even gone out to where it needed to go. So there is definitely a lot of concerns not just about Republicans, but among Democrats as well as how this is going to shape up.

Tom Temin: And what about the Oct. 1 deadline or the Sept. 30 deadline for the rest of the budget? There is pressure on all of the bills because of Oct. 1. I mean, Wednesday is September already.

Mitchell Miller: Right, exactly. And you have these two – the two track bills that we’ve talked about. And really that $3.5 trillion legislation isn’t actually legislation yet, as you know, it’s not even a bill yet, because they’ll be working on it over the next few weeks. So for them to get that into bill form, and then go back to the $1 trillion bipartisan infrastructure bill and try to get both of those votes, whichever one comes first, and then to actually get them both through right before Oct. 1, because if they do stick to this Sept. 27 deadline related to the bipartisan infrastructure bill, then of course, they’re right up against it related to the start of the new fiscal year. So as we’ve discussed over the last few months, it’s going to be very, very hard for them to reach that deadline. And I suspect we are going to hear those two words that we often hear in the fall which is “continuing resolution” as they try to wrap everything up.

Tom Temin: I think I’ll head back to the beach. Mitchell Miller is Capitol Hill correspondent for WTOP. As always, thanks so much. 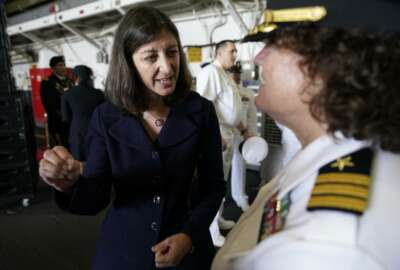 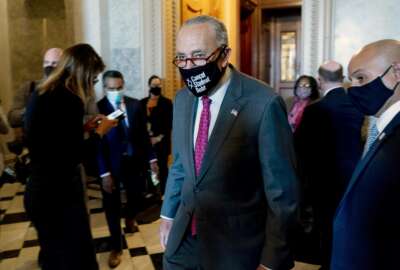