Questions for the GSA administrator nominee, on what the job will actually involve

Robin Carnahan, President Joe Biden’s nominee for administrator of the General Services Administration, has a software development bent and background. So can she take on the range of challenges GSA faces in acquisition and real estate? Federal Drive with Tom Temin got analysis from longtime GSA watcher, federal sales and marketing consultant Larry Allen.

Tom Temin: Larry, let’s begin with what we do know about Ms. Carnahan.

Larry Allen: Tom, what we know is that this will be her second stint at the General Services Administration. She served in the Obama administration, as the head of state and local government technology for GSA’s 18F division, the division that helps agencies with innovative acquisition solutions, particularly in terms of developing new technology. And she spent the last year as a fellow at Georgetown University, doing almost the same type of thing working on software development but also how to cooperate software acquisition across state and local government lines. So someone who has at least familiarity with a certain portion of GSA’s portfolio.

Tom Temin: Yes, but she worked in a small piece of a small piece of GSA – nothing to do with the gigantic schedules program, the GWACs, the fleets, the real estate, so what do you think the challenges will be for her, should she get confirmed?

Larry Allen: Well, Tom, I think you’re in the right track. The immediate challenge for Robin Carnahan is going to be how do you manage GSA’s massive IT and professional services portfolios, so that they continue to do a couple of things well? One is, how do they continue to deliver innovation through acquisition vehicles that customers actually want to use? GSA right now is on an upswing, their information technology and professional services arms are doing really very well with current contracts, and they’ve got some new ones in the pipeline. Those new ones can be very promising. But we also want to make sure that they have features that are going to continue to attract buyers. You can’t always assume just because you have buyers today that you will tomorrow. You have to make sure that the new programs are going to meet their needs. Internally, you have to make sure that everybody inside GSA, Tom, remembers that they’re all pulling on oar for the same boat. Everybody wants the GSA boat to move ahead down the river, down the ocean, wherever it is you want it to go. And they want it to stay safe and in good waters. Sometimes I think there’s a tendency for one group to try to outdo the other. And Robin Carnahan is going to have to manage that and make sure that everybody knows that it’s one GSA team, working within many portfolios.

Tom Temin: Yes, because people that go to GSA for acquisition and contract solutions have lots of choices. And you need to maintain the differentiation, even though it’s all in service of helping agencies acquire what they need.

Larry Allen: That’s right. And whether it’s the GSA Schedules program, whether it’s a GWAC for the technology or professional services side of it, whether it’s something more routine, but nevertheless important, like commercial product acquisition. GSA has competing programs for that. Again, you have the schedules, you have GSA’s own internal requisition channel. And we have the new GSA a marketplace pilot program that GSA is running under a mandate from Congress. All of these programs, Tom, have constituencies. All can fill a role inside government acquisition. Right now, it’s undeniable that all of these have to compete for resources internally inside GSA, and each has their supporters and detractors. Another key thing for Robin Carnahan is to make sure that each of these viable channels gets the attention and support and tools it needs to be successful, and to make sure that there’s proper oversight to ensure that they’re working as intended. That’s not going to be an easy task.

Tom Temin: We’re speaking with Larry Allen, president of Allen Federal Business Partners. Then there’s the whole real estate side with quite a number of leases, as you have been reporting are up in the coming term. And nobody knows who or when or how many federal employees will come back to the offices anyhow. So that’s a really complicated sort of web, there, of issues.

Larry Allen: Tom, it is a very complicated web of issues and it’s one that gets historically a tremendous amount of congressional oversight. While you and I like to talk tech and talk about the acquisition part of GSA, the larger portfolio by far is the real estate portfolio in the Public Buildings Service. And no GSA administrator can avoid public building service issues. Robin Carnahan is going to be coming in at a time when a significant number of GSA leases are coming up for renewal. I think there’s a statistic out that says between 2019 and 2023, fully 60% of GSA leases are going to have to be renegotiated. And the question is, how many of these do you actually renegotiate? Because GSA negotiates these leases not for itself, but for other federal agencies as their role as the government landlord. So how many leases do you renew? Do you renew the ones for up to 50,000 square feet at 50,000 square feet or do you renew them at a reduced level? This is not going to be an easy process, as we try to forecast what types of workers are going to come back to work in an office, how frequently they’re going to work there, and what that office setup is going to look like when they’re on site. I don’t think that anybody, whether it’s the GSA administrator, or anybody else, Tom, has all the answers to that. So I’m forecasting that this issue is going to take a fair amount of her time. And that at least for a little while, until some of those unknowns are filled in, it’s going to look a little bit like rocket science.

Tom Temin: All right, and I want to switch gears for a minute because there’s another nominee, that is Michael Brown, currently from the innovation arm at the Defense Department, as next Undersecretary for Defense for Acquisition and Sustainment – again, jumping from the limited but important area of getting new and innovative contractors into DoD to the great big gigantic maw of what represents most of the $200 or $300 billion they spend.

Larry Allen: That’s gonna be a challenge, too. The same way that Robin Carnahan comes from a slice of something and coming into a much larger boat, that’s the same challenge for Mr. Brown, Tom, as he goes into be the Undersecretary for Acquisition and Sustainment, a much, much broader portfolio. But one of the things that I find to be really curious about his appointment, about Robin Carnahan’s appointment and some of the other appointments that this administration have made – for acquisition roles – is that almost every single person being put into an acquisition role has a technology background. To me, that sends a very strong message that the administration thinks that some of the traits that are used in technology, and in managing technology projects can be used in acquisition, and maybe moved over to the acquisition realm fairly easily. So the whole idea of getting the solution quickly, getting the solution in an innovative manner, getting an innovative solution to begin with. These are all hallmarks of innovative technology leaders, who are now going to be put in charge of acquisition, not just acquisition for technology, but acquisition of a whole number of things. It’ll be interesting to see, Tom, how that technology skill set manifests itself in these new positions.

Tom Temin: Well, maybe Mr. Brown will be able to get the new hope-for tanker to actually put gas in an airplane?

Larry Allen: Haha, that would be a good use of the acquisition time.

Tom Temin: All right. Larry Allen is president of Allen Federal Business Partners. Thanks so much.

Larry Allen: Tom, thank you, and I wish your listeners happy selling.

Tom Temin: We’ll post this interview at FederalNewsNetwork.com/FederalDrive. Hear the Federal Drive on demand. Subscribe at Podcastone or wherever you get your shows. 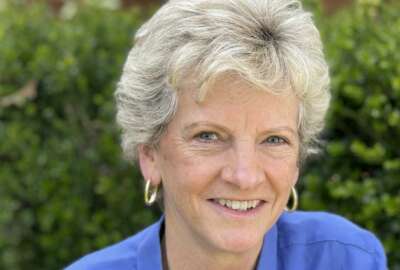 Biden to nominate another Missouri native to lead GSA