About 10 percent of flag officer positions can be replaced by lower grades, study says

Congress thinks there are too many generals and flag officers holding positions in the Defense Department.

It’s something the 2017 defense authorization act directly addressed by telling DoD to reduce the number of general and flag officer billets by 110 by 2022.

Now, a new RAND study commissioned by the Pentagon finds there are just about that many general and flag officers that are unneeded.

The study revealed that after looking at the requirements for general and flag officer positions, about 132 of the 615 positions didn’t meet the need for such a high ranking official.

“We tried to look and see to make sure each of the positions that were on the books were adequately justified,” Lisa Harrington, associate director of the Forces and Resources Policy Center at the RAND Corporation told Federal News Network. “Our method tries to look at these positions from a different perspective, either organizationally, the characteristics of the individual position, what opportunities are there for reductions and then what are inconsistencies across the services?”

RAND concluded that about 10 percent of those positions can be downgraded to leadership below a flag officer or be eliminated altogether.

Congress and other critics of flag officer inflation feel the issue has gotten out of hand.

We “expect that the Department of Defense and the military departments will improve efficiency by eliminating bloated headquarters and staffs while preserving the necessary number and grades of positions for general and flag officers who are responsible to train and lead our nation’s forces in battle and to bring them safely home again,” the 2017 defense authorization report stated.

Harrington said there is always a fear of “grade creep.”

“There is a trickledown effect for every four star,” Harrington said. “They drive a pyramid – a three star, a two star, a one star – and over time the tendency is for that grade to creep up. You want the most qualified people serving in these positions. There is a need to tamp down that wish to continuously increase grades and ensure that there are senior executives at a sufficient level, but not too high of a level to do the mission.”

Costs are also an issue. Each four-star general comes with an entourage and travel detail and so do the generals below him or her.

In the 2017 defense authorization act, Congress also told DoD to find areas where it can cut its flag officer assignments by 10 percent.

RAND used a variety of techniques to decide what positions would be best served by lower grades or may even be eliminated.

RAND looked at past studies, organizational responsibilities and human capital development to find the answer.

The study also conducted a wargame and asked military experts what they would cut first.

“We purposely inflated the number to be reduced so we forced some hard choices,” Harrington said. “It got people in the room thinking differently about how they might reorganize things. They definitely protected the combatant commands, that was one of the first things they did. It was interesting, almost all the teams we had playing in this exercise went for the service vices and thought they didn’t necessarily need to be four stars.”

The participants also thought many of the military acquisition positions could go to civilian leaders. 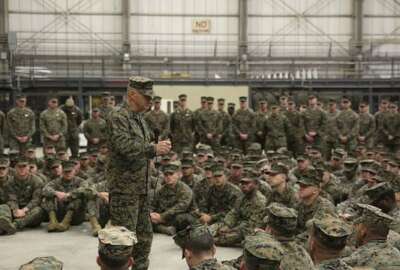