Two years ago, as part of an ongoing quest to tamp down on federal bid protests, Congress imposed new demands on the Defense Department, requiring procurement officials to deliver much more information to losing bidders about why they didn’t win a particular contract.

But to hear Amazon Web Services tell it, in one of the Pentagon’s most...

Two years ago, as part of an ongoing quest to tamp down on federal bid protests, Congress imposed new demands on the Defense Department, requiring procurement officials to deliver much more information to losing bidders about why they didn’t win a particular contract.

But to hear Amazon Web Services tell it, in one of the Pentagon’s most high-profile procurements in recent memory — the JEDI cloud contract — DoD flat-out ignored that law.

Procurement law experts say the department’s alleged decision to offer a less-than-fulsome debriefing to AWS all but ensured the company would file a protest — if it weren’t for the fact that a challenge of the up-to-$10 billion award was already highly probable.

Among a long list of complaints AWS lodged in its JEDI lawsuit at the Court of Federal Claims was that DoD did not provide a single substantive answer to the hundreds of written questions the company submitted once it learned it had lost the contract. Under the “enhanced debriefing” process Congress mandated in the 2017 law, procurement officials are supposed to disclose all of the information that would normally be releasable as part of a bid protest, and answer any losing bidders’ written followup questions within five days. 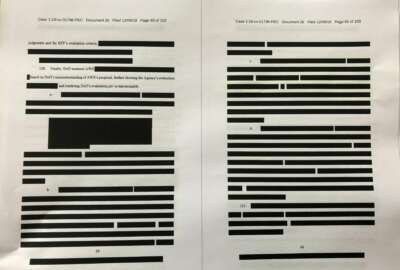 “Enhanced debriefings was an idea to address one of the reasons companies protest — they don’t know or want more information on why they lost,” said Bill Greenwalt, a former Congressional staff member who led acquisition policy issues for the Senate Armed Services Committee until his departure in 2017, shortly before the provision was added to the 2018 National Defense Authorization Act.

“You spend a lot of bid and proposal money on a potential contract and then lose and you don’t know why. The protest process elicits that information even if you lose,” said Greenwalt, who is now a senior fellow at the Atlantic Council. “This provision was designed to provide that information to head off protests, but if the result is insufficient information in the enhanced debrief then that could also trigger a protest, as was likely, at least in part, in this case.”

Defense Department spokespeople did not respond to multiple requests for comment on Amazon’s allegations about the debriefing process and how the Pentagon handled it.

In its lawsuit, AWS claims DoD declined to give the company an in-person debriefing. Instead, it disclosed source selection documents in writing, and then gave the company the legally-required two days to submit written followup questions.

“In violation of applicable procurement regulations, DoD failed to provide reasonable responses to relevant questions about whether source selection procedures contained in the solicitation, applicable regulation, and other applicable authorities were followed,” according to the protest. “In fact, DoD did not provide a substantive response to a single one of the 265 questions that AWS timely submitted, leaving AWS in the dark about DoD’s explanations for the substantive issues for which AWS raised concern in the debriefing questions.”

To be sure, delivering detailed answers to that number of questions about a highly-complex procurement within the span of a single workweek would have been a tall order — and “substantive” can be a subjective term. But if Amazon’s allegations are true, DoD could have done more to comply with the law, legal experts said.

“Due to all of the controversies surrounding the JEDI contract, I would have thought that the Defense Department would have bent over backwards to justify its award decision,” said Scott Amey, the general counsel at the Project on Government Oversight. “Why continue to give contractors more reasons to question this contract and slow down the process?”

Charles Tiefer, a government contracting professor at the University of Baltimore Law School said part of DoD’s rationale for not bending over backwards may have been that it believed a protest was inevitable, and that any information it gave AWS would only be used against it in court.

“But obviously Congress knew quite well that the bidder receiving the debriefing would turn around and use it in litigation, and that was fine with Congress. DoD apparently thinks it can do what it wants to do regardless of Congress,” he said. “In this case in particular, one of the substantive questions is how DoD gets around Amazon’s credentials. The debriefing questions mean to pin DoD down on why it didn’t make an award to Amazon, which had a very powerful record of cloud work for the CIA. DoD had a lot of explaining to do, and it didn’t want to do any of it.”

But another former Senate Armed Services Committee staff member, who requested anonymity to discuss the procurement because of its sensitivity, saw DoD’s apparent nonresponsiveness as more of a technical violation than a show of flagrant disregard for procurement law, considering the circumstances.

In that person’s view, multibillion-dollar contracts involving well-resourced competitors were not primarily what Congress had in mind when it created the new debriefing rights for losing bidders.

“The purpose of the legislation was, first and foremost, to help small businesses get information so that if they wanted to continue to compete, they didn’t feel like they had to file some expensive protest to get information,” said the former staff member. “It’s not really targeted at this level of an acquisition or these kind of sophisticated companies. If I’m the department and I know they’re going to file a protest no matter what I tell them, why would you feed them all of this information that they would then just try to use against you with very expensive lawyers?”

The former aide also pointed out that Congress did not draw any clear lines to define exactly how much information it wanted DoD to provide in its written debriefing answers, nor did it set out any specific remedies for bidders who feel the department hasn’t been forthcoming enough.

“There isn’t really a standard for what the government did to you after [an award]. So while the court might look at it and say, ‘Oh, that’s interesting,’ there’s no way to actually ding the government on it in the protest process,” the former staff member said. “It still isn’t great government, but the government lawyers know exactly where their left and right limits are. They’re very good at understanding what the law is and what they have to do and don’t have to do. And I assume that whatever they responded with was right up to that line.”

But Tiefer said that since the new protest debriefing provisions have not yet been tested in the Court of Federal Claims, it’s at least theoretically possible that AWS could win at least a partial victory on its complaints about the debriefing process.

“A judge who wanted to decide this case on procedural grounds rather than substantive grounds has an amazing tool in this debriefing statute, because no one else has construed it previously. The judge makes what she wants of the statute,” he said. “For example, the judge might suspend the award rather than throw it out, pending fulfillment of Congress’s mandate about debriefing.”

For its part, if Congress is perturbed by DoD’s handling of the contract award — or any other aspect of JEDI — it’s not showing it.

In the annual DoD appropriations and authorization bills lawmakers have been moving across the legislative finish line this week, the House and Senate declined the opportunity to place any restrictions on JEDI, despite intense lobbying over the past year — especially on the part of Oracle, which was excluded from the procurement in its first phase.

The absence of any language that would affect JEDI is noteworthy, because both bills have contained notes of concern or funding restrictions tied to Congressional reporting requirements in both of the last two years.

But the NDAA Congress sent to the president’s desk on Tuesday contains only one peripherally-related provision, requiring a report on how DoD intends to migrate its applications to the cloud. The appropriations bill designates JEDI as a “special interest” item, but notes that DoD has met all of its previous Congressional reporting requirements, and asks only that the department keep Congressional committees posted on further developments every quarter.

Dana Deasy, the department’s chief information officer said last week that DoD and Microsoft plan to start deploying the unclassified portions of JEDI as soon as February, with classified capabilities to follow in the fall of 2020.

But Amazon indicated late last week that it may attempt to stand in the way of that schedule.

So far, the company has not asked the court to issue a preliminary injunction that would put a stop to DoD and Microsoft’s performance of the contract. But in a joint filing by AWS and the Justice Department, attorneys disclosed that Amazon has asked DoD to voluntarily delay its buildout of the JEDI cloud until at least March while the litigation unfolds.

And after a procurement process that’s already dragged on for nearly two years, DoD is not interested in delaying its deployment of JEDI any further.

“In light of the urgent need for these services in support of the national security interests of the United States (which AWS disputes), the government cannot agree,” attorneys wrote. “Given the government’s objection to this request, AWS has indicated that it is reserving its right to seek preliminary injunctive relief and a temporary restraining order if and when necessary.”