On the heels of the Army’s investigation of the murder of Spc. Vanessa Guillén, the military is facing a wave of pressure from both sides of the aisle to move the prosecution of sex crimes out of the chain of command.

The Guillén investigation is another piece of growing evidence that commanders are ignoring sexual harassment and assault allegations, making them unreliable arbiters. Now the report, legislation and statements from former top military officials are...

On the heels of the Army’s investigation of the murder of Spc. Vanessa Guillén, the military is facing a wave of pressure from both sides of the aisle to move the prosecution of sex crimes out of the chain of command.

The Guillén investigation is another piece of growing evidence that commanders are ignoring sexual harassment and assault allegations, making them unreliable arbiters. Now the report, legislation and statements from former top military officials are piling up to change the longstanding process.

Guillén was sexually harassed, went missing and was murdered last April in Ft. Hood, Texas. The investigation into her death found her leaders failed to take appropriate action. The report goes on to say Guillén’s harasser created an intimidating, hostile environment.

Along with the report, Sen. Kirsten Gillibrand (D-N.Y.) released a bill last week addressing sexual assault in the military, which would create an independent prosecutor for sex crimes.

“The Military Justice Improvement and Increasing Prevention Act takes important, commonsense steps to deliver justice for survivors of serious crimes and prevent sexual assault in our armed forces,” Gillibrand said last week. “I am proud to introduce this new, bipartisan legislation and I thank all of my colleagues on both sides of the aisle for being my partners in this fight. With strong support in Congress, the Pentagon, and the White House this is a defining moment for passage and I’m confident we can get it done.”

The bill now has 46 co-sponsors, 10 of which are Republicans, including some of the most right-wing members of the party such as Sen. Ted Cruz (R-Texas). With support from a wide range of ideological perspectives, and from nearly half the Senate sponsoring the bill, it has a very high likelihood of being included in the 2022 defense authorization bill — a piece of legislation that has made it into law 60 years in a row.

“For years, senior military leaders have acknowledged that sexual assault and harassment are a cancer ripping at the fabric of the force,” said Don Christensen, president of Protect Our Defenders and former chief prosecutor of the Air Force. “The passage of this critical legislation will increase our military’s readiness and ability to bring the fight to the enemy, and will finally provide a real opportunity for justice for survivors.”

Defense Secretary Lloyd Austin has said in the past that he is open to all options.

Last Friday, during an event at the Aspen Institute, Deputy Defense Secretary Kathleen Hicks said, “The secretary is reviewing that input and talking to us. We have a very deliberative process here inside the Pentagon, where commander viewpoints and certainly the viewpoints of the leadership and the military departments will be important in forming the secretary’s decision. We believe accountability has to be part of the solution set. Prevention is incredibly important, but we’re not leaving accountability off the table. We know that there’s a lack of trust and faith in the institution to deliver.”

Michael Mullen, former chairman of the joint chiefs of staff, told POLITICO last week that he supports taking prosecutions out of the chain of command as well.

“I’m at a point now where I am ready to support removal, which is a huge step for me because I recognize how serious that issue is,” he said. “We just can’t keep doing what we’re doing because it hasn’t worked.”

Members of the House are also in support of legislation similar to Gillibrand’s bill. Rep. Jackie Speier (D-Calif.), who heads the House Armed Services Military Personnel Subcommittee, has long championed the issue.

There were estimated to be nearly 21,000 sexual assaults in the military in 2018, the last recorded data released by DoD. — SM

Rapid acquisition is fine, but don’t forget to fly before you buy

Congress has given the Defense Department a lot of latitude to bypass its usual acquisition rules over the last five years, mainly with the goal of moving faster.

From the perspective of DoD’s top testing official, that’s all well and good, as long as the need for speed doesn’t overtake the imperative to kick the tires on a new system before the department invests billions of dollars procuring it.

“While DOT&E fully supports the MTA concept of faster acquisition and fielding in order to get capability to warfighters more quickly, MTA programs still need to be positioned to assess and demonstrate operational performance — what the system can and cannot do, and whether employment and unit tactics, techniques, and procedures can remediate system shortcomings,” he said. “An adequate operational demonstration, or an otherwise tailored operational test, must be executed to provide an opportunity to ‘fly before you buy.’”

MTA — sometimes called “Section 804” authority — lets the military services bypass most of the usual policy requirements in DoD’s acquisition guidebook for programs that are expected to either finish their prototyping or be fully-fielded within five years of their inception.

O’Toole said DOT&E is currently overseeing 28 separate MTA programs. Some have wisely embraced early operational tests on their own: he cited the Army’s Future Long-Range Assault Aircraft and the Marines’ Amphibious Combat Vehicle as examples.

Others, not so much.

To be fair to MTA programs, O’Toole also pointed out that some of DoD’s biggest programs, using traditional acquisition methods, have also put procurement ahead of rigorous testing. The F-35 program, for example, is still only in the initial operational test and evaluation (IOT&E) stage, despite having already procured hundreds of jets. The $13 billion aircraft carrier U.S.S. Ford hasn’t even started the formal IOT&E process, despite having been afloat for four years now.

And he said some of the fault lies within the testing community itself, which hasn’t quite adapted to the policy imperative to acquire systems more quickly, and will likely need more funding to do the sort of quick-turn testing envisioned by approaches like Middle-Tier Acquisition.

“For test and evaluation to add value to the acquisition process, our infrastructure, tools and personnel must keep up with rapidly changing warfighting technology and threats,” O’Toole said. “To this end, earlier this year, DOT&E developed a science and technology strategy to guide test and evaluation modernization. With the right resources, we hope to begin implementing it by the start of the next fiscal year.” —JS

Coast Guard working on retaining and recruiting women and minorities

The Coast Guard is making progress on removing barriers to entry and retention for women and minorities in the service.

Coast Guard Commandant Adm. Karl Schultz said he wants the branch to be 25% women and 35% minorities.

“We’re making progress, but it’s slow,” Schultz told members of the House Appropriations Homeland Security Subcommittee last week. “If I did nothing but bring women into Cape May at 4,000 a year for the next four years, and every single woman I brought in stayed [in] the service then we’d only move 15% to probably 18%. I can’t find 4,000 women right now at that pace.”

The Coast Guard commissioned the RAND Corporation to look into why the service was having trouble retaining women, especially at the mid-career level.

“We were retaining women, somewhere between 5% and 10% depending on what point you look into the career trajectories at a lower rate than their male counterparts,” Schultz said. The Coast Guard is now addressing some of the issues the RAND study pointed out.

Schultz said the service has instituted a more integrated total force to allow women to take 84 days of maternity leave.

The service has promised to try to station dual military spouses together as much as possible as well.

The Coast Guard also hired RAND to conduct a study on minority recruitment and retention, which will end up on Schultz’s desk in July.

In the meantime, the service is implementing recommendations from its diversity and inclusion action plan. About 20 of the 125 suggests have been implemented and Schultz said the remaining will be put into place by September.

“We’ve also brought onboard five new officer recruiters that’ll be linked to minority serving institutions and historically black colleges and universities,” Schultz said. “They’ll be in Atlanta, they’ll be in Norfolk, Virginia; New Orleans, in Hampton Roads, Virginia, and one programmatically in Washington. I think this is the start of an increasing footprint there but we are trying to take our recruiting efforts to parts of America that allow us to grow the ranks.” — SM 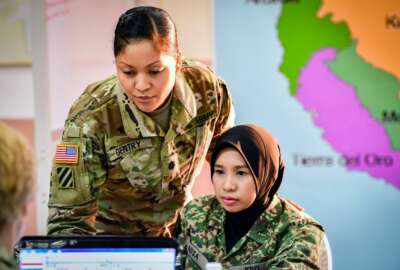