The lawmakers’ assertion followed up on a critically worded GSA inspector general report, and marked the latest...

The lawmakers’ assertion followed up on a critically worded GSA inspector general report, and marked the latest skirmish between lawmakers and the Trump administration over a canceled plan to move the FBI’s headquarters to one of three sites in suburban Maryland or Virginia.

At the heart of the matter is a fundamental dispute between GSA and lawmakers over who pulled the trigger on walking away from a plan launched in 2013 to sell the J. Edgar Hoover building on Pennsylvania Avenue.

In emails released by Democratic House members Thursday, and in interviews with inspector general auditors, GSA maintains that FBI Director Christopher Wray made the final call, opting to either renovate the Hoover building, or demolish and rebuild on its site.

“The director is wedded to the PA Ave location,” Public Buildings Service (PBS) Commissioner Dan Mathews wrote in a Jan. 23 email to GSA Commissioner Emily Murphy and Deputy PBS Commissioner Michael Gelber — one of the emails released by lawmakers.

House and Senate Democrats — including several who represent states and districts that would’ve hosted a new suburban FBI headquarters — believe Trump, who expressed interest in bidding on the Hoover site before his presidency, personally directed agency officials in keeping the FBI in downtown Washington.

On Jan. 24, Murphy discussed the future of the FBI headquarters with the president, Office of Management and Budget Director Mick Mulvaney and White House Chief of Staff John Kelly in the Oval Office.

“The President was briefed yesterday on this by the GSA administrator, Deputy [Attorney General Rod Rosenstein] and FBI Director and signed off on this path forward,” GSA Chief of Staff Brennan Hart wrote in an email to Joseph Lai, a special assistant to the president, in an email dated Jan. 25.

The next day, FBI Chief Financial Officer Richard Haley told Mathews that GSA and the bureau were “working closer now than at any time before” on the headquarters project.

“Both teams are closely aligned, and now that we have a direction from WH that will continue to tighten [the] relationship [going] forward,” Haley wrote in a Jan. 26 email.

The lawmakers also renewed concerns that Murphy, in a Senate committee hearing in April, “concealed” information about White House meetings she’d attended about the FBI headquarters.

“During sworn testimony, you were asked directly and repeatedly whether you had any communications with President Trump or other White House officials about this project. In response, you withheld information about this and other meetings,” the House members wrote, reiterating a charge leveled by GSA’s Office of Inspector General in August.

That report claims Murphy’s testimony was incomplete and may have left the “misleading impression that she had no discussions with White House officials in the decision-making process about the project.”

GSA, after reviewing a draft version of the IG report, butted heads with auditors about its findings and asked the IG office to remove all discussion of Murphy’s congressional testimony from the final version.

Likewise, the agency took issue with the lawmakers’ claims on Thursday.

“As previously testified by GSA and the FBI, the leadership team at the FBI made the decision to keep its headquarters at the current Pennsylvania Avenue location,” GSA spokeswoman Pam Dixon said in a statement. “A number of emails referenced in today’s congressional letter are taken out of context and refer to the project’s funding approach, not the location decision. Suggestions that those emails indicate presidential involvement in the location decision are inaccurate. GSA stands by its testimony and the cost analysis proposed in the joint revised plan submitted to Congress in February.”

Regardless of who made the final decision, lawmakers in the House and Senate remain unconvinced that keeping the FBI headquarters in D.C. makes any logistical sense.

“It’s becoming abundantly clear that we do not have all of the facts around the FBI headquarters consolidation project,” Sen. Tom Carper (D-Del.), one of the letter’s signatories, said in a statement Wednesday. “That’s why last month, I asked the Department of Justice to investigate GSA’s abrupt decision to rescind a long-studied proposal for the consolidation project, including whether the White House influenced GSA’s decision, and if so, why? I want satisfactory answers to questions like this about the Trump Administration’s plans for the FBI headquarters.”

In their letter to Murphy, the five House Democrats say demolishing the Hoover building and putting a new headquarters in its place would cost “hundreds of millions of dollars” more than a consolidated suburban campus and would accommodate 2,300 fewer employees.

Those employees, under the administration’s plans, would relocate to FBI facilities in Idaho, West Virginia and Alabama — some of which are still under construction.

“We have heard no legitimate justification for this decision,” the lawmakers wrote.

The Government Accountability Office in 2011 reported that the FBI “has outgrown” the Pennsylvania Avenue site, and added that it “does not meet the FBI’s long-term security requirements.”

According to a Jan. 23 email from Mathews, the FBI “didn’t rule out a demolish rebuild or full move out and renovation” prior to Murphy’s meeting in the Oval Office.

Mathews added that, based on conversations with FBI CFO Haley, “he said they haven’t considered how they would swing out 5,600 people though, and that would be a key consideration.”

Lawmakers have pressed GSA officials for more details about the projected cost of “swing space,” temporary offices for FBI employees to work out of during the construction of a new headquarters.

All told, the GSA inspector general estimates a consolidated suburban FBI headquarters would cost $3.56 billion. GSA, it determined, could bring in $334 million from the sale of the J. Edgar Hoover building site.

Lawmakers also cited Trump’s interest in bidding on the Hoover building site back in 2013. They requested from Murphy a “complete timeline of all meetings and discussions” between GSA, the FBI and White House on the headquarters project since the beginning of the Trump administration.

“As a direct result of President Donald Trump’s clear conflict of interest in this matter, we are now requesting information and documents to determine whether the president is making decisions about the FBI headquarters building based on what is best for the country or what is best for his own financial bottom-line,” lawmakers wrote.

The FBI did not immediately provide comment for this story. 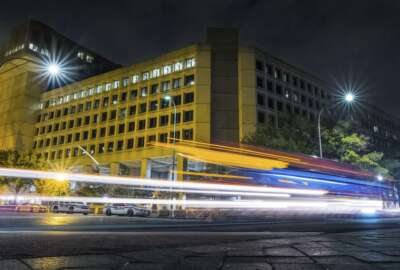 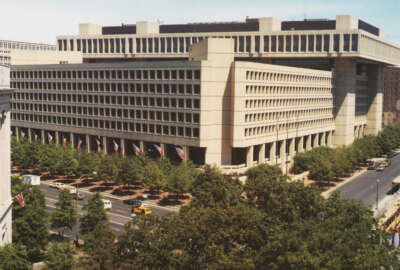