Appropriators on Capitol Hill have a busy week this week. The first official week of summer. For one thing, House members are marking up the 2023 defense budget. And taking up the defense authorization bill.  Federal Drive with Tom Temin  gets the latest from WTOP Capitol Hill correspondent, Mitchell Miller.

Appropriators on Capitol Hill have a busy week this week. The first official week of summer. For one thing, House members are marking up the 2023 defense budget. And taking up the defense authorization bill.  Federal Drive with Tom Temin  gets the latest from WTOP Capitol Hill correspondent, Mitchell Miller.

Tom Temin: And so does this mean no CR? They’re going to be all done, Mitchell?

Mitchell Miller: That’s some very wishful thinking Tom. No, that does not mean that. But, we’ll walk through it a little bit. Wednesday is going to be a really big day for the Pentagon budget. Lawmakers with the House Appropriations Committee are going to take it up. The House Armed Services Committee is going to be taking it up as well. That’s that marathon session that happens every year. Democratic leaders basically looking to try to support the President’s 4% increase in the military spending, with a bill of around $770 billion. With the total bill, everything included, of more than $800 billion with defense authorization. Now, that would be an increase of 10s of billions of dollars. And it would also increase the military pay raise by 4.6%. But some Republicans and centrist Democrats say that because of inflation soaring, that’s just not going to be enough. Among those pushing for an increase is Virginia Congresswoman Elaine Luria, who just says that amount of money in this budget isn’t enough to cover inflation.

Tom Temin: Got it. And then of course, there’s the civilian side, and are the appropriators back to work on that one at all yet?

Mitchell Miller: They are there, there has been some work on that the appropriations committee last week, moved through a lot of different pieces of legislation. So there has been progress on that front, which we haven’t been able to report until recently. Among the many things that are included in that is funding for the capitol police budget, they’re going to  at least propose to get about $700 million, that would be an increase of $100 million. So there has been some movement on that front. It does look like they have made probably the most progress that they’ve made all year, just in the last few weeks. But again, as we go back to that continuing resolution, it really looks like there’s a lot of optimism on the Democratic side, but less so among centrist Democrats and Republicans. Democrats, Democratic leaders would like this all to be wrapped up in a bow and in a budget by August, but I just don’t see that’s going to happen, even though we’ve had some significant progress related to this.

Tom Temin: Could part of the issue be that the Republicans, smelling the fact that they might be able to take over the House and Senate after midterms, would prefer a CR so that they could do the budget work next year, and get more of their priorities in line?

Mitchell Miller: You have thrown the dart right into the bullseye Tom, for sure. That is exactly what they’re looking at. House Republicans really know that they are going to overtake the house. It’s just a matter of how many votes there how many lawmakers are going to be included in that. Right now the margin is 12 for the Democrats, there are estimates that it could flip anywhere from 30 to even 50 seats on to the Republican side. So they say well, why should we rush this, if we know that we’re more than likely going to have power in the House, have a new Republican House Speaker. So they are putting the brakes on some of these proposals to get it through. And then meanwhile, on the Senate side, you have an even bigger increase proposal for defense. So that’s another complicating factor. James Inhofe, the outgoing ranking Republican, really wanted a big beefy defense proposal there. So a lot of moving parts as always, and as always, politics playing a role here.

Tom Temin: We’re speaking with WTOP Capitol Hill correspondent, Mitchell Miller. And getting close to the parochial federal agency issues, telework is back in discussion now and looks like some of the members want to kind of get clarification and maybe some progress on what the final telework policy might be for federal employees.

Mitchell Miller: That’s right. As you know, Virginia Congressman Gerry Connolly has been a big booster on this. But he really wants to get the metrics related to telework so that it’s not just an anecdotal type of thing where they say, well, it really helps all these agencies. So he’s joined with Maryland Congressman John Sarbanes to propose legislation that would effectively get metrics exactly on how these telework policies are working or not working, and to show that they are working in his view. This is legislation called the Telework Metrics and Cost Savings Act. Basically, they argue that this legislation would make a case for telework and it actually moved through the House Oversight and Reform Committee last week. It does have strong support from Democrats. On the Republican side, some people say, “Well wait a second, what about these agencies that have had to move back and forth during the pandemic?”. They feel that some of these rules, at least proposed, are a little too stringent. For example, if an agency were to go to a lot of telework and then need to get back to getting more people into the office, they worry that this could hamstring some of these agencies. Among the examples they point to is the IRS, which, as we both know, has a huge backlog of all kinds of paperwork that needs to be done. And a lot of it has to be done in person or somehow to get people in the office to do that. So a little bit back and forth here. But another interesting development related to telework.

Tom Temin: Well, I know in the private sector, they’re still kind of wrestling with the whole issue. I know of one good size DC employer, actually Northern Virginia, that went from three mandatory days in the office to two, just because people, employees are leaving and demanding it.

Mitchell Miller: Right. Yeah. And that’s what a lot of these agencies are wrestling with. They have actually, many of them have made improvements with telework and have gotten more people to work from home. But now, the pendulum is shifting back, as you know, in connection with the pandemic. So a lot of these agencies are trying to figure out exactly how they can kind of move one way and be flexible in certain respects, just like parts of the private sector.

Tom Temin: And you’re also reporting some progress on the GSA and its search for here we go again, FBI headquarters location. I thought that was decided back when Barbara Mikulski was still a senator.

Mitchell Miller: That’s right, deja vu all over again, as Yogi Berra would say. But we are back kind of to square one with the FBI headquarters. The FBI headquarters, of course, under the Trump administration, they wanted to keep the headquarters, rebuild it, but due to headquarters in DC on Pennsylvania Avenue. Now, Virginia and Maryland lawmakers are saying, well, let’s get this thing going again. So they had a call last week with the General Services Administration, GSA assuring them that several sites in our area still remain on the board as possibilities. Springfield, Virginia, Landover in Greenbelt, Maryland. Not surprisingly, lawmakers from both states are praising this saying that maybe this could show that a decision could come soon, and that they could actually start getting a lot of the economic development and a lot of the economic progress that they think that a new FBI headquarters in the suburbs could make. The Maryland delegation specifically led by Steny Hoyer, the House Majority Leader, is calling on the GSA to make a final decision on this in the fall, just like the optimism about the continuing resolution. I think that is also a rather optimistic call since we are talking about something that as you just pointed out, goes back years and years.

Tom Temin: And no truth to the rumors that the FBI headquarters could be tied to the location of the Washington Commanders.

Tom Temin: All right. And, by the way, how were things back on Capitol Hill itself? Summer is officially underway now, today. And you know, the whole idea of tourists and touring the Capitol, what’s going on there?

Mitchell Miller: Well, it’s really interesting. You do definitely see a lot more groups here on Capitol Hill, which was nice to see because it’s always been that way. Big school groups. The other day, I saw hundreds of Future Farmers of America from all across the country, all these young people coming in to DC. The thing is, people don’t really realize and you still see tourists coming up to the Capitol saying can I just kind of walk in. That it is still restricted, and that was pointed out last week. On a day that after there was a January 6 hearing many hours later into the evening, there was actually a crew from CBS’ Late Show with Stephen Colbert, they had been given permission to do some interviews and do some shooting with video in the Longworth Building, but they were there so long that when Capitol Police encountered him, they actually charged them. And so we’ll see how that gets sorted out. But it just shows that there are still restrictions in all of the Capitol complex and actually, a lot of people don’t realize that the Capitol Visitor Center remains technically closed and the capitol police, as well as the Senate Sergeant at Arms have indicated that that may not fully reopen, believe it or not, until 2023.

Tom Temin: Well, all right. So don’t make any big plans that involve being in the interior of the Capitol. In the meantime, Mitchell Miller is Capitol Hill correspondent for WTOP. 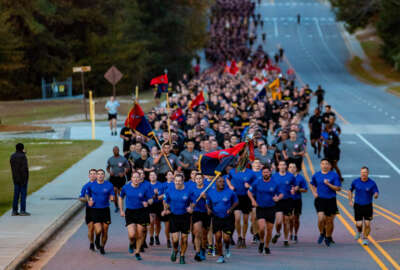 Next year’s $770B defense authorization act includes a raise