As the nation’s largest employer, the federal government is also its largest energy consumer. Now that the U.S. has rejoined the Paris Agreement — to reduce global greenhouse gas emissions and limit global warming to below 2 degrees Celsius — President Joe Biden wants the public sector to be an example for environmental sustainability.

As the nation’s largest employer, the federal government is also its largest energy consumer. Now that the U.S. has rejoined the Paris Agreement — to reduce global greenhouse gas emissions and limit global warming to below 2 degrees Celsius — President Joe Biden wants the public sector to be an example for environmental sustainability.

Considering the building and construction industries account for more than a third of energy and process-related carbon dioxide emissions, one of the biggest ways to reduce the nation’s carbon footprint is with real estate. Fortunately for the General Services Administration, they have a head start.

“Since 2013, GSA has successfully reduced its total inventory by 7 million rentable square feet (RSF), reducing its footprint from 378 million RSF to 371million RSF in 2020,” an agency spokesperson said in an email to Federal News Network. “Over the last 15 years, GSA has made substantial progress improving our buildings’ energy efficiency and space utilization through investments in new and existing facilities, technologies, and operational best practice adoption.”

The environmental impact of federal real property, as well as government procurement power, are just some components in Biden’s wide-ranging Jan. 27 Executive Order on Tackling the Climate Crisis at Home and Abroad. The EO proposes a carbon pollution-free electricity sector by 2035, and clean and zero-emission vehicles for all government fleets, including the Postal Service. This is notable because 36% of federal energy consumption comes from more than 350,000 buildings, while about 60% comes from vehicles and equipment, according to the Energy Department’s Federal Energy Management Program (FEMP).

The EO directs the White House Council on Environmental Quality and the Federal Acquisition Regulatory Council to make sure contractors pay more attention to reducing carbon emissions. Agencies must submit draft action plans to the new National Climate Task Force and the Federal Chief Sustainability Officer within the next three months. Those plans should describe steps agencies can take to make facilities more resilient to climate change impacts.

“Action plans should, among other things, describe the agency’s climate vulnerabilities and describe the agency’s plan to use the power of procurement to increase the energy and water efficiency of United States government installations, buildings and facilities and ensure they are climate-ready. Agencies shall consider the feasibility of using the purchasing power of the federal government to drive innovation, and shall seek to increase the federal government’s resilience against supply chain disruptions,” the EO reads.

“By reducing the carbon footprint of federal agencies and leveraging agency programs – from funding to regulatory – we can show climate leadership from the top,” USGBC said in a statement. “Supporting climate mitigation across the government also enables us to take measurable steps to support a healthy, resilient, sustainable and equitable future for all. We value our long partnership with federal agencies in supporting this effort and look forward to accelerating that work.”

GSA also has a seat on the National Climate Task Force, and the spokesperson said the EO “reinforces GSA’s role as a federal leader in energy optimization and operational best practices, as evidenced by the more than 40% reduction in greenhouse gas emissions GSA has achieved over the last decade.”

But Dan Mathews, commissioner of the Public Buildings Service at GSA from August 2017 until January 2021, had a more cautious reaction.

“I guess time will tell,” he said. “Organizational structures like that, that tend to blur or confuse the normal chain of command, can be challenging.”

Mathews said it was easy for people without a great understanding of real estate to set counterproductive goals. He said GSA’s role on the Task Force is probably a good thing, but he added that what would really help the agency boost energy efficiency of federal real estate would be full access to the capital generated from rent payed by agencies. That money goes into the Federal Buildings Fund, which supports PBS activities.

Whatever’s left after operating expenses can go to construction, repairs or major renovations of federal buildings – the kinds of projects needed to improve energy efficiency and sustainability. Because the easier fixes, such as more environmentally-friendly lighting, are largely done, he said.

Mathews said about half the money, or nearly $1-billion-to-1.5 billion each year, goes untouched despite the fact that money can only be used for federal real estate projects. GSA asked for all available capital, or “zero budget authority,” from the fund in its fiscal 2021 budget request to Congress. The agency requested $2.1 billion to “improve space utilization, safety, and condition of government-owned assets and … to support the critically important missions of agencies and environmental remediation requirements.”

Otherwise, GSA does not have enough capital to maintain its existing portfolio of real estate, which then makes it hard to consolidate that portfolio for a smaller carbon footprint, Mathews said.

To their credit, agencies have reduced energy consumption over time. FEMP data showed a 25.6% reduction in governmentwide building energy intensity from 2003 to 2019 – with the top three performers being the Office of Personnel Management, and departments of Commerce and Transportation.

Top agencies for sustainable building use include GSA, the National Records and Archives Administration, the Tennessee Valley Authority and the departments of Veterans Affairs, Agriculture and Defense. “Sustainability” criteria comes from Executive Order 13834 and covers a range of metrics from building energy reduction and performance contracting, to waste management and resiliency against weather disruptions.

GSA testified to Congress in 2019 that high performance federal buildings designed with sustainability in mind cost about 23% less to operate than legacy properties.

GSA, in particular, has reduced its leased footprint by 10.4 million square feet since October 2014, the agency spokesperson said. During his time at PBS, Mathews said their strategy revolved around two things: Reducing total square footage, and getting real estate at a better price. To do this, PBS prioritized leasing first and GSA’s overall portfolio second.

“We went after leasing first, because when you lease, you have access to private capital through your lease. So you leverage, with your annual lease payment, significant amounts of private capital to restructure your lease portfolio – the portfolio the federal government consumes in the private market,” he said. “As a result, we’re avoiding over $4 billion in lease costs that – because of the transactions we put in place when we were there, by reducing the size of that lease portfolio. Along with that smaller footprint is less energy consumption.”

The idea was to trade quantity for quality, forego older, larger and less efficient buildings in favor of smaller sites that, while maybe more expensive per square foot, took up less total space and used more sustainable materials or design. Mathews said the biggest way to reduce energy and water consumption is by reducing total square feet. Then comes the matter of renovating, upgrading and retrofitting the spaces left for maximum energy efficiency and space utilization. Agencies need both to make a dent, he said.

In part 2 of Federal News Network’s special report Building Back Greener, we look at the federal leasing process and its role in green buildings.

How agencies can factor in building leases better 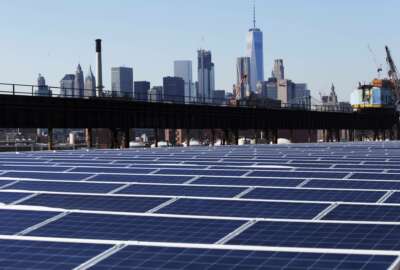 Federal courthouses, other properties might be prime spots for new solar panels 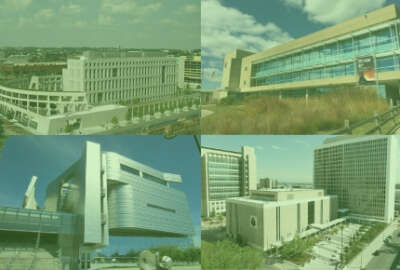 MAP: Where in the country are GSA’s greenest buildings?