The Office of Management and Budget and Office of Personnel Management have more details about how they expect agencies to implement President Donald Trump’s short-term hiring freeze.

The Office of Management and Budget and Office of Personnel Management have more details about how they expect agencies to implement President Donald Trump’s short-term hiring freeze.

Agencies can reallocate current civilian employees with their own organization to meet high priority needs.

Employees on detail to other agencies are not affected either, but department leaders should make sure that reimbursable details aren’t used to evade the original intent of the hiring freeze, Sandy and McGettigan wrote.

Agencies can also extend appointments for term and temporary employees “up the maximum allowable time limit,” the memo said.

They can also transfer a limited number of Senior Executive Service members between agencies to fill leadership vacancies — only if departments cannot reallocation resources within their current workforce.

As previous memos indicated, the freeze does not apply to:

OPM may grant other exemptions to the hiring freeze in “critical situations,” the memo said.

Agency heads must write to the OPM director to ask for additional exemptions. They must explain in writing why the organization needs more staff and what critical need that person will fill, why reallocating or reassigning existing staff to meet that critical need isn’t possible and what the consequences are of not filling the position within a three to six month timeline.

Agency leaders should also work with their chief human capital officer to decide what positions to exempt from the freeze, Sandy and McGettigan wrote.

The latest memo follows initial guidance that OMB released Jan. 25, which included details about how agencies should approach positions that they recently filled and whether those recently hired individuals should report for work.

As of noon on Jan. 22, agencies cannot fill existing vacant positions, nor can they issue any new jobs offers or create new positions, Sandy wrote.

Individuals who received a job offer or an appointment before Jan. 22, received a confirmation from the agency, and received a start date on or before Feb. 22, 2017 should report to work on that day, OMB said.

But if a person has a job offer from an agency that does not include a start date —  or that date is after Feb. 22 — agency heads should review the position and decide whether it should be revoked, or if the prospective employee should show up for work.

In a Jan. 23 executive memo, Trump announced that the hiring freeze — which temporarily prohibits agencies from making new hires until OMB develops a long-term plan within the next 90 days to reduce the size of the federal workforce through attrition — applies to all executive branch departments and agencies, including the Defense Department. 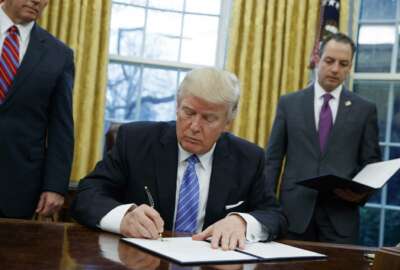 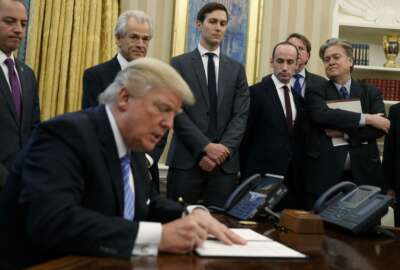