The Transportation Security Administration is hiring a chief diversity, equity and inclusion officer to spearhead the work of an inclusion action committee, as some lawmakers express frustration with lack of diversity among the agency’s senior ranks.

TSA Administrator David Pekoske says the chief DEI officer will be a member of the senior executive service and join the agency within the next month. The agency’s Inclusion Action Committee recommended TSA create the new position.

The Transportation Security Administration is hiring a chief diversity, equity and inclusion officer to spearhead the work of an inclusion action committee, as some lawmakers express frustration with lack of diversity among the agency’s senior ranks.

TSA Administrator David Pekoske says the chief DEI officer will be a member of the senior executive service and join the agency within the next month. The agency’s Inclusion Action Committee recommended TSA create the new position.

Pekoske said the official will be charged with acting on other recommendations in the committee’s December 2021 report. TSA created the action committee in the wake of George Floyd’s murder in 2020.

“They put forth some excellent recommendations as to how we can address this from a very strategic level within the agency,” Pekoske said during a May 26 House Homeland Security transportation and maritime subcommittee hearing.

While the majority, about 55%, of TSA’s approximately 60,000 employees are persons of color, 53 out of 66 Federal Security Directors are white and 54 are men, according to Subcommittee Chairwoman Bonnie Watson Coleman (D-N.J.).

“I’m frustrated by the lack of TSA’s progress in diversifying its senior ranks,” she said.

Pekoske acknowledged that TSA’s senior management should reflect the diversity of TSA’s entry-level workforce. He committed to staying on top of diversity metrics, in particular at the supervisory and management levels.

“When you look at just the senior level, you really have to look down a couple to see how much diversity do you have in the in the middle management that will become your senior leaders in a few years,” Pekoske said. “And so I think it needs to be a very holistic approach across the agency.”

D&I ‘understaffed and under resourced’

Beyond the establishment of the chief DEI officer, the action committee’s 2021 report lays out multiple recommendations aimed at strengthening and sustaining TSA’s “inclusive culture,” and removing barriers to a diverse leadership.

The report urges adequate funding for TSA’s new Diversity and Inclusion Division, noting that the agency’s existing D&I program is “severely understaffed and under resourced.” That has led to “critical issues” in managing, measuring, supporting and sustaining diversity and inclusion initiatives, according to the report.

It additionally urges TSA to overhaul its promotion policies, including the adoption of a blind review process combined with the requirement to use a diverse interview panel.

“The IAC received consistent sentiment from colleagues at all levels within the agency that highlights the inconsistencies with the promotion system that has led many to believe, ‘it’s not what you know, but who you know,’” the report states. “This recommendation focuses on the application of several new requirements to reinforce a more transparent process.”

During last week’s hearing, Pekoske said the December report is not the last word from the Inclusion Action Committee.

“That Inclusion Action Committee is not just a one-shot committee,” he said. “This is going to be a continuing committee within the agency, we just solicited for a new slate of members to come in. So we’ll change out the members on a rotating basis over the course of the years.”

During the hearing, Pekoske also reiterated that achieving pay equity for TSA employees is his top priority.

The House passed the Rights for the TSA Workforce Act earlier this month. The legislation would bring TSA employees under the same personnel system as other federal employees under Title 5 of U.S. Code, including the General Schedule pay grade.

But the bill passed with virtually no Republican support, and it faces an uncertain future in the Senate. Lawmakers also have to separately approve the funding to grant TSA employees pay raises in fiscal 2023.

Pekoske said 81% of transportation security officers make less than equivalent employees at other agencies who are paid under the General Schedule. Meanwhile, 51% of the agency’s non-TSO workforce is paid less than their counterparts at other agencies.

The Biden administration is proposing to fund the pay increase by ending the diversion of passenger security fees to pay off the federal deficit. Instead, TSA would be able to keep an additional $1.5 billion in fees in FY-23

Pekoske said TSA delivered the legislative proposal for ending the diversion of the fees to Congress on May 2.

He noted the imperative to ensure TSA’s workforce stays stable and grows as travel is projected to return to pre-pandemic levels starting this summer.

“If these long standing pay challenges are not fully addressed in fiscal year ’23, I am concerned that it would lead to even higher rates of attrition and significantly undercut our recruitment efforts,” he said. “We can’t let this happen because this is a time where we need to grow.” 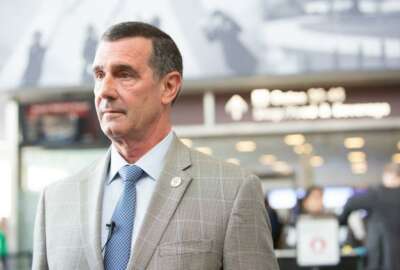