A pattern of sexual harassment and lack of accountability at the management level has “cast a shadow” over the National Park Service, and agency watchdogs are calling for change.

During a June 14 House Oversight and Government Reform Committee hearing on park service (NPS) oversight, Interior Department Deputy Inspector General Mary Kendall said the agency “does not do well in holding accountable” employees who engage in mismanagement or misconduct.

A pattern of sexual harassment and lack of accountability at the management level has “cast a shadow” over the National Park Service, and agency watchdogs are calling for change.

During a June 14 House Oversight and Government Reform Committee hearing on park service (NPS) oversight, Interior Department Deputy Inspector General Mary Kendall said the agency “does not do well in holding accountable” employees who engage in mismanagement or misconduct.

At issue are multiple sexual harassment reports, federal procurement violations, and the failure of NPS Director Jonathan Jarvis to get permission from Interior’s Ethics Office to write a book.

Kendall said during her testimony that the Canaveral National Seashore (CANA) leadership has been the subject of four reports in as many years. Three of those reports involve claims against the park’s chief ranger, “including violations of federal procurement rules, conduct unbecoming an NPS law enforcement officer, and sexual harassment.”

Not only has NPS taken no action against the chief ranger’s conduct, Kendall said, but the chief ranger continues to serve in his position “despite three substantiated allegations against him in less than two years. NPS has not had time to respond to this most recent report, but with three other reports in four years, this is a profound example of a leadership problem that NPS has failed to address at multiple levels.”

Another report found evidence of a “long-term pattern of sexual harassment and hostile work environment in the [Grand Canyon National Park’s] River District.”

This includes the complaints of 13 original former and current NPS employees who worked for the River District, as well as 22 other people who saw or experienced sexual harassment or hostile work environments, in the past 15 years.

“How many times does somebody have to be sexually harassed for it to get on your radar screen to say ‘enough is enough, now we’re going to recommend firing?'” said Rep. Jason Chaffetz (R-Utah), chairman of the oversight committee.

Jarvis said removal was an option, but he had not written his own recommendations for punishment because the process for disciplinary action was not complete.

This brought up an issue that other agencies — notably the Veterans Affairs Department — must balance when it comes to disciplining employees and senior executives.

Jarvis agreed that it was difficult, though not impossible, to fire an employee. However, “if we do not follow the [disciplinary] rules, there’s a high likelihood the individual can be reinstated.”

“That’s part of the problem we face,” Mica said. “Civil service was set up as a protection against political manipulation or misuse of authority over legitimate working civil servants. It’s gone far beyond that for providing cover for people who don’t do a good job and it puts barriers in the way.”

Kendall said she thought the failure to remove employees comes “in the unwillingness to take progressive discipline.”

“I would not take these two examples and paint the entire park service with that same brush,” Kendall said. “But it does cause concern that there may be more pervasive problems when you’ve got it at two different parks at this kind of level.”

Jarvis told committee members that NPS has “zero tolerance” for sexual harassment, but not only did the reports mean the IG had only hit the tip of the iceberg, change within the service was not going to happen overnight.

“I think the Grand Canyon is an indicator, as well as [Canaveral] that we may have a significant problem of sexual harassment in the service in certain areas,” Jarvis said, adding that his office has launched a team effort to address sexual harassment servicewide, along with a prevalence survey to get a baseline on harassment.

Asked by Rep. Will Hurd (R-Texas) about the details of the survey, Jarvis could only say it would be contracted out to a third party,  and there was no timeline yet for completion.

Jarvis’ leadership as well as his own actions came under fire during the hearing. The park service director apologized to the committee for his failure to obtain permission from Interior’s Ethics Office to write a book for the NPS Centennial, and his omission in a handwritten letter to Interior Secretary Sally Jewell that he had approached a publishing company about the book.

While Jarvis did not make any money on the book — all proceeds benefit NPS — he was removed from serving as the service’s ethics officer and receives monthly ethics training.

Rep. Elijah Cummings (D-Md.) said his problem was not with the book itself so much as Jarvis’ “utter disregard for the ethics rule.”

“I know you’ve come in and apologized this morning, and you apologized to your employees over and over again,” he said. “What do you think that says to employees? There probably is a link when they see the top person in the agency, the very person who is supposed to be making sure they do the right things, and when they see you not doing the right thing, that has to affect morale, don’t you think?” 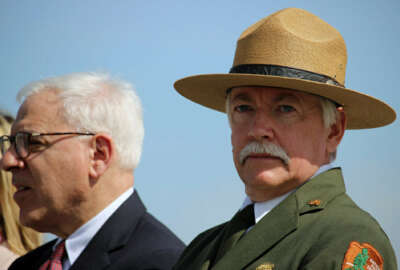