The National Archives and Records Administration is looking to expand a successful approach for managing email records to text messages and other digital communications as part of a bid to help agencies with an ever increasing deluge of electronic records.

The issue has become only more prevalent after COVID-19 forced agencies to work more remotely and widely...

The National Archives and Records Administration is looking to expand a successful approach for managing email records to text messages and other digital communications as part of a bid to help agencies with an ever increasing deluge of electronic records.

The issue has become only more prevalent after COVID-19 forced agencies to work more remotely and widely adopt video meetings, chat messaging apps and other digital tools to carry out official government business.

“The virtual environment has impacted electronic records management,” Laurence Brewer, the U.S. chief records officer at NARA, said during an Aug. 23 event hosted by the Digital Government Institute in Washington. “I think we’re still learning what the implications are as new tools continue to be developed that allow agencies to connect and collaborate electronically.”

Brewer said NARA is focusing on guidance for agencies to help implement ways of managing digital records ranging from social media to text messages and collaboration platforms, including by expanding the “Capstone” guidance for email to other forms of digital communications.

“We want to expand Capstone beyond what it currently covers right now for email to include text messages and chats and instant messages,” Brewer said.

Published in 2013, the Capstone approach provided agencies with guidance for managing email records electronically. It came in advance of a deadline for agencies to manage all permanent and temporary email records in an electronic format by the end of 2016.

The guidance gave agencies the ability to designate senior officials’ email accounts as permanent and other federal employee accounts as temporary, providing a systematic way for retaining email records rather than doing so on a case-by-case basis.

Capstone gave agencies a way to automatically archive and preserve emails, rather than leaving it to individual users and agency offices to ensure they are complying with federal records retention laws, according to Jason Baron, a professor at the University of Maryland’s iSchool and former director of litigation at NARA.

He says Capstone is aimed at ensuring the records of senior officials in government are properly preserved and archived to ensure accountability and public access well into the future.

“Today, there are tens of millions of emails that are in agency repositories that are subject to [the Freedom of Information Act], and that will be preserved permanently at the National Archives,” Baron said in an interview. “This is a huge step forward for email preservation, and now NARA, talking about messaging preservation as part of Capstone, will go much further.”

The automation aspect of Capstone is sorely needed for cases where agency officials are carrying out business using text messages and other forms of digital communications, according to Baron. While federal records laws require these messages to be preserved, it’s often left to individuals to take screenshots or find other ways to archive their messages, he said.

“Agencies have not provided the technology to automatically capture from phones and from other devices, text messages and ephemeral app messages that relate to government business,” Baron said. “It shouldn’t be the individual who has to do it. It should be the agency ensuring that all of these messages get to the right place.”

Both Brewer and Baron said when Capstone was first being developed, NARA considered covering all forms of electronic records in the guidance, not just email. But according to Brewer, the technology to automatically archive texts and other forms of digital communication was not as mature as for email at the time.

The preservation of official text messages has become especially relevant after the revelation about the Secret Service’s missing Jan. 6 texts. The Capstone approach was adopted after several instances where agencies mismanaged or lost important email records, according to a NARA white paper.

“When [Capstone] first came out, we focused on email,” Brewer said. “Now, it’s all over the news with a certain agency I won’t name about text messages, and it’s something that we considered, but at the time, the technology wasn’t quite there to support that kind of a guidance approach.”

But not every product provides those features, requiring agencies to get their arms around the messaging applications their employees are using and potentially set some parameters.

“Each agency should look at the available commercial space, and I would recommend choosing one or more apps, and also figuring out how to archive texts,” Baron said.

NARA is also working on technology solutions through the Federal Electronic Records Modernization Initiative (FERMI) to help agency records managers with tools and services for text message retention and other electronic records preservation, according to Brewer.

“We’re looking at how we leverage artificial intelligence, and we want to write guidance that will help agencies get there,” he said. “But we also have to be aware of what are the technologies and the tools that agencies have at their disposal to make sure that they can implement guidance effectively.” 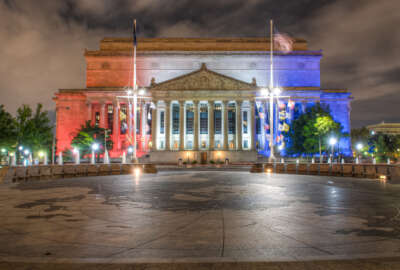