Appropriators are still finalizing the details, but a 1.9 percent federal pay raise looks more likely as part of the final budget deal that lawmakers hope will avoid another government shutdown Friday.

A House Democratic aide told Federal News Network that a 1.9 percent raise for civilian employees appears to be included in the forthcoming budget deal.

“The nature of compromise is that not everyone can get everything they want, but the American people have sent a clear message that they don’t want another shutdown,” he said in a statement to Federal News Network. “While we review the details of this bipartisan package, my hope is that we can agree on a deal to keep government running and allow our federal employees to do their jobs with a 1.9 percent cost-of-living raise.”

The Washington Post first reported the likelihood of a 1.9 percent federal pay raise.

Senate Minority Leader Chuck Schumer on the Senate floor Wednesday spoke of a plan that would essentially package the six appropriations bills that lawmakers have essentially already agreed to.

“Though it hasn’t been discussed much during the negotiations, the passage of this agreement clears the way for the six bipartisan appropriations bills that have languished,” he said.

The Senate already included a 1.9 percent federal pay raise in the financial services and general government appropriations bill. The raise cleared the Senate months ago, and the House, in its attempts to reopen government during the recent shutdown, has also signed off on a 1.9 percent pay bump.

It’s still unclear if Congress plans to grant a 1.9 percent raise to federal employees that is retroactive to Jan. 1. Pay has been frozen for civilian employees since the beginning of the year, after President Donald Trump finalized his plans to implement a pay freeze in 2019.

Lawmakers have been trying to reverse the President’s planned pay freeze for months. The House most recently passed a 2.6 percent federal pay raise for federal employees this year. That legislation mostly has Democratic support in the Senate, but Sen. Lisa Murkowski (R-Alaska) earlier this week announced her support for a 2.6 percent raise.

Schumer also expressed a hope that the final funding package would also include back pay for federal contractors, who, to date, have had no real mechanism that would make them whole after the 35-day government shutdown.

“We are trying to get the conferees to approve a proposal to deal with federal contractors,” Schumer said. “Thousands of federal contractors have not been reimbursed from the 35-day shutdown. This issue is still hanging in the bounds.”

Schumer urged his colleagues to pass legislation that Sen. Tina Smith (D-Minn.) first introduced that would grant back pay to federal contractors.

“The contractors, many of them just working people, are in the same boat as government employees, except they haven’t gotten their back pay. They should,” Schumer said.

Smith, along with Sen. Mark Warner (D-Va.), were among several senators who introduced legislation last month that would guarantee retroactive pay for low-wage federal contractors. 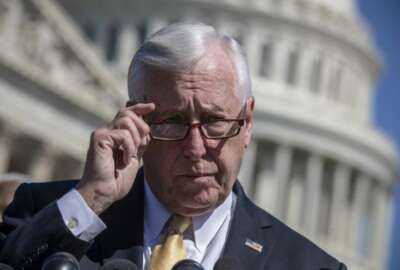 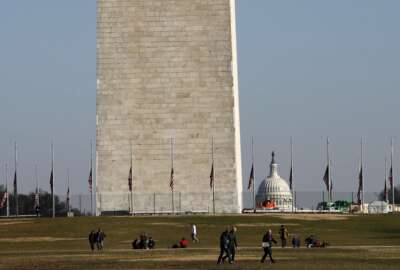 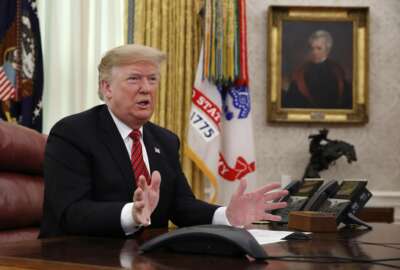