Many federal employees’ paychecks should look a little larger by early next week, if not sooner.

The 2019 federal pay raise will be reflected in most employees’ upcoming paychecks, which they should receive as early as this Friday or as late as next Tuesday, April 23.

The Office of Personnel Management on Thursday afternoon confirmed the majority of federal employees will receive one payment on or about April 22, which will include the federal pay...

Many federal employees’ paychecks should look a little larger by early next week, if not sooner.

The 2019 federal pay raise will be reflected in most employees’ upcoming paychecks, which they should receive as early as this Friday or as late as next Tuesday, April 23.

The Office of Personnel Management on Thursday afternoon confirmed the majority of federal employees will receive one payment on or about April 22, which will include the federal pay raise and a lump sum. The lump sum will reflect the retroactive pay they’ve earned from the beginning of the first pay period of the year to the most recent one, which ended April 13.

The National Finance Center had told its customers earlier this week it was preparing to implement the 2019 retroactive raise.

The Interior Business Center said it also had implemented personnel and payroll system programming to effectuate the federal pay raise for its customers.

“Provided any and all necessary personnel actions have been put in place  by each employee’s home agency, which could impact the pay out date, IBC’s payroll services customers will see the raise and lump sum payment reflected in their paychecks dated April 23,” an IBC spokesman told Federal News Network.

But employees who had some sort of “intervening action” or change in pay status, such as a promotion, within grade increase or quality step increase, may see a delay in the timing of the federal pay raise.

OPM said the majority of these employees who had experienced an intervening personnel action may not receive the federal pay raise until May 20.

At the IRS alone, 24,750 bargaining unit employees had some sort of personnel action request between the beginning of 2019 and now, NTEU said. Among them are 3,500 new IRS hires.

The IRS told NTEU calculations for employees who had experienced a personnel status change must be done manually and could take as long as four months, the union said.

“It shouldn’t take this long for this raise to reach employees’ pockets, and this is a complication that could have been avoided if the President’s ill-advised pay freeze had not been allowed to take effect in January,” NTEU National President Tony Reardon said Tuesday in a statement.

The Interior Business Center also acknowledged the possibility of delays for employees. As long as individual IBC agencies have accounted for employee personnel actions in a “timely” way, those employees should also see the 2019 federal pay raise reflected in their April 23 checks, the center said.

Some corrective personnel actions may occur in future pay periods, the IBC said.

Members of the Senior Executive Service and senior level, scientific and professional employees may also experience a delay. The process of adjusting pay for members of the SES is different from that of most other federal employees, and the National Finance Center must make those changes manually and with additional guidance, an NFC update to Commerce Department employees, which Federal News Network obtained, read.

The Interior Business Center said its personnel and payroll system has been programmed to accept the federal pay raise for its SES customers, again, as long as the executives’ agencies have effectuated any intervening personnel actions in advance.

The National Treasury Employees Union estimated at least 20 percent of the federal workforce had experienced a change in pay status so far this year.

OPM hinted at the complexity of implementing the federal pay raise in a series of memos in late March. Agencies, for example, needed to calculate and adjust pay for employees who government or moved to another department after the beginning of the year.

President Donald Trump made the federal pay raise official with an executive order back on March 28, more than six weeks after he had first included the 1.9% raise in the spending package he signed into law in mid February.

The EO rescinded the order Trump initially signed back in December, which froze pay for civilian employees at 2018 levels. 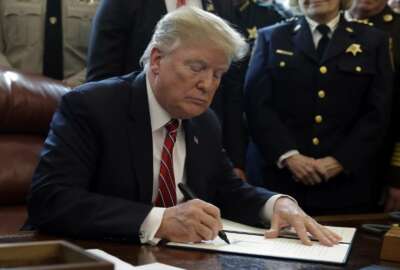