That’s number the American Federation for Government Employees is energetically pushing for civilian and military personnel in fiscal 2017 — well over the the 1.6 percent pay raise President Barack Obama will request in his budget proposal.

“We may or may not get a 5.3 [percent raise],” AFGE National President J. David Cox told reporters at the union’s Feb....

That’s number the American Federation for Government Employees is energetically pushing for civilian and military personnel in fiscal 2017 — well over the the 1.6 percent pay raise President Barack Obama will request in his budget proposal.

“We may or may not get a 5.3 [percent raise],” AFGE National President J. David Cox told reporters at the union’s Feb. 8 legislative and grassroots mobilization conference in Washington. “But we are clearly putting on the record that we are owed the 5.3.”

Though some have already written off a 5.3 percent raise as unlikely, AFGE, as well as some members of Congress, say it’s time to play catch-up on the years when pay remained relatively stagnant.

“For so many years, [federal employees] essentially were the ones who sacrificed for the sequestration effort,” Rep. Chris Van Hollen (D-Md.) said in an interview with Federal News Radio. “Now, that the economy has come back, they need some catch-up as well. In other words, they need to at least build back, if not to where they would have been, to at least have something of a more decent wage.”

Van Hollen is the ranking member of the House Budget Committee Ranking Member and  was critical of the President’s 1.6 percent proposal.

But that proposal could gain some new life.

“I promise you, I will do everything in my power to make sure you are fairly compensated for your work and you get meaningful pay raises,” Cummings said at AFGE’s legislative conference.

Though only a 3.8 percent raise, Cox said it’s a better offer than what the President is set to request.

This isn’t the first impassioned speech Cummings has given to thank federal employees. And members like Norton, Van Hollen and Rep. Mark Tekano (D-Calif.), who also spoke to AFGE members Feb. 8, have large constituencies of federal employees in their districts and often recognize them for their work.

But AFGE said it wants more members of Congress — even those who don’t have large military bases or agency field offices in their districts — to become vocal advocates for the federal workforce.

As the union grows bigger, AFGE, which now has at least 302,077 members, will see bigger challenges in the future, Cox said.

“One little, small loss can become one gigantic, big loss,” he said. “That’s exactly what’s happening with the attacks on civil servants and they’re about to get a whole lot worse.”

For Cox, he’s already beginning to see signs of those attacks in the new session of Congress.

A new bill from Senior Deputy Majority Whip Dennis Ross (R-Fla.) calls for more oversight of official time, a longstanding point of contention between some members of Congress and federal unions.

AFGE is also concerned with the some of the initiatives Defense Secretary Ash Carter proposed under the new Force of the Future program. For AFGE, the program promotes more cuts in the DoD civilian workforce and undermines the progress the department made when Congress repealed the National Security Personnel System (NSPS).

AFGE was working with DoD to develop the New Beginnings labor-management program  after NSPS was repealed, but those conversations stalled when the department began its work on Force of the Future, Cox said.

“The whole goal, and his whole intent, is to stop dues withholding, stop the collective bargaining process; eliminate us,” he said.

“You are under attack,” he said. “I’ve come back here to encourage you not to give up.” 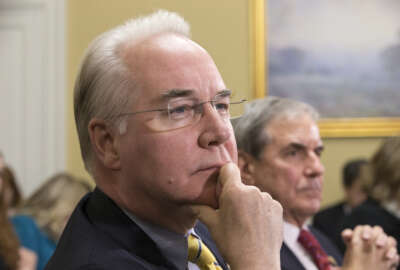 5 reasons AFGE is hopeful about the Republican Congress