No idea, no lower-level position and no agency sub-component is too small a step toward better employee engagement and satisfaction.

It’s a concept that the Labor Department takes seriously, and one Deputy Secretary Chris Lu said contributed to Labor’s rank of most improved large agency for the second consecutive year. Federal employees’ job satisfaction at the department improved by 4.4 points from 2014, and it moved from 10th to eighth in the 2015 Best Places to Work in the Federal Government rankings.

“We took the smallest...

No idea, no lower-level position and no agency sub-component is too small a step toward better employee engagement and satisfaction.

It’s a concept that the Labor Department takes seriously, and one Deputy Secretary Chris Lu said contributed to Labor’s rank of most improved large agency for the second consecutive year. Federal employees’ job satisfaction at the department improved by 4.4 points from 2014, and it moved from 10th to eighth in the 2015 Best Places to Work in the Federal Government rankings.

“We took the smallest ideas that people came to us [with],” Lu told Federal News Radio. “For instance, people said, ‘Hey, we need better signage in our building.’ We put [up] better signage. Someone said, ‘Why don’t we have a microwave in our cafeteria?’ So we put a microwave in the cafeteria. We always say we don’t have a monopoly on the best ideas. Our employees who have been there longer, we value what they think, we value what’s on their minds and we’re listening.”

Lu said his department’s success comes in part from new federal workplace flexibility and telework initiatives. But listening to employees and directly explaining to them what suggestions the department realistically can and can’t implement, goes a long way.

An emphasis on employees — particularly the people whose work often gets overlooked — is essential, Rep. Mark Meadows (R-N.C.), chairman of the House Oversight and Government Reform Subcommittee on Government Operations, told the 2015 Best Places to Work winners at the Partnership for Public Service’s Dec. 8 award ceremony in Washington.

That attention to the individual employee, NASA Administrator Charles Bolden told Federal News Radio, is what helps keep the agency at the top of the Best Places to Work rankings.

“We try to go to the very lowest level possible,” Bolden said. “We want the employees to understand that there is no one that’s unimportant, no one whose advice we’re not looking for, and we intend to act on it as best we can.”

For the fourth year in a row, NASA topped the partnership’s list of best places to work for large government agencies. The administration scored 76.1 points out of a possible 100, up 1.5 points from 2014. Out of six category rankings — effective leadership, employee skills-mission match, pay, strategic management, innovation and teamwork — NASA held the top spot for all but teamwork, coming in second to the Intelligence Community.

Roughly 70 percent of agencies improved their scores this year, up from about 43 percent in 2014.

Overall employee satisfaction scores improved for the first time in four years. The partnership found the governmentwide index scored 58.1 out of 100 points in 2015. But more progress won’t happen overnight.

“Pick a few things to work on,” said Beth Cobert, acting director of the Office of Personnel Management, during the award ceremony. “You don’t need to fix everything. We can’t all address everything at once. But pick a few things, stick with it. When employees see that you’re using the data, that is how they know that everyone is committed to improvement.”

The Labor Department saw success within its subcomponents — 15 out 16 improved their scores in 2015.

For Lu, it was satisfying to see the Bureau of International Affairs, which ranked near the bottom of the nearly 300 agency subcomponents in previous years, move to the 138th spot.

Lu said the bureau cleaned up and reconfigured its office space, which significantly improved employee morale.

Bolden said NASA will also focus on improving engagement within its individual subcomponents.

“We’ll go back and we’ll actually start working with center directors at our nine NASA [flight, space and research] centers, talking to them about what we at headquarters can do to help them with their people,” Bolden said. “Whether it’s me coming down to visit, or the deputy [administrator] coming to visit or Robert [Lightfoot, associate administrator for NASA]. We’re really going to focus on the subcomponents and not worry about the agency, because as they come up the agency comes up.”

In a bout of friendly competition, Lu said Labor has its eye on NASA’s number one spot next year. But he also wants to see the changes the department has made so far, continue past Secretary Thomas Perez’s tenure and on to the next administration.

“Secretary Perez always says there’s a hop in his step as he goes around the department, advocating on behalf of American workers,” Lu said. “But you also notice there’s a hop in the step of our employees. They recognize that at this point in our nation’s history, helping workers get the opportunities that they need, protecting them in their workplace is really one of the core missions of our nation right now, so they understand that their work matters to helping people all around the country.”

Focus on the mission

Like the Labor Department, agency leaders recognize that an organization’s mission often drives an employee’s morale and commitment.

This is the first year the partnership used six mission categories to compare 75 organizations. It grouped agencies into law enforcement, public health, national security, energy and the environment, oversight, and financial regulation categories.

David Dye, director of Federal Human Capital Services at Deloitte, which helped the partnership produce the rankings, said the purpose behind the new categorization was to compare mission rather size.

“In this case, people who do the same kinds of work, people with the same kind of workforce expectations and preferences and skill sets; can we learn something by putting those combinations of organizations together? It’s a way of dissecting the data and then hopefully leveraging conversations among those who do well in that mission category, to help others,” he said. 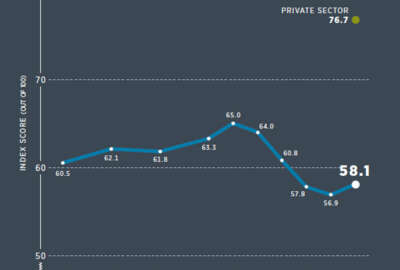