As time runs low before the current continuing resolution (CR) expires on Dec. 16, the Social Security Administration heightened calls to Congress to receive its entire budget request from the Biden administration for fiscal 2023.

SSA received $400 million in the CR, but agency officials said that won’t be enough to tackle years-long challenges for the agency’s...

As time runs low before the current continuing resolution (CR) expires on Dec. 16, the Social Security Administration heightened calls to Congress to receive its entire budget request from the Biden administration for fiscal 2023.

SSA received $400 million in the CR, but agency officials said that won’t be enough to tackle years-long challenges for the agency’s workforce. The agency is pushing Congress to approve the Biden administration’s budget request of $14.8 billion for 2023 — a $1.4 billion increase over the enacted level for 2022.

“The additional funding would have allowed us to maintain level service by hiring employees, funding our fixed cost increases, funding information technology (IT) projects and allocating enough overtime to handle workloads, provided there is not an unexpected and significant increase in demand for our services and programs,” SSA Deputy Commissioner for Communications Jeff Nesbit said in an agency blog post.

Lawmakers are also calling for SSA to receive its budget request. In a recent letter to House appropriators, 70 representatives said simply to maintain its current services, SSA would need an increase of $800 million for 2023, and “significantly more” to make any improvements. The letter comes as SSA faces what the lawmakers said is a “perfect storm” that’s led to backlogs and delays in many of the agency’s services.

“Since 2010, SSA’s operating budget has declined by approximately 14%, after adjusting for inflation,” the lawmakers said. “The number of trained employees available to answer calls, take and process applications and resolve problems is now at its lowest level in 25 years. At the same time, since 2010, the number of Social Security and SSI beneficiaries has increased by approximately 20%.”

Currently, it takes an average of over six months to get a decision on an initial disability claim. There are also long wait times to speak with representatives through the agency’s service center. Republican lawmakers have said telework has caused the delays, but federal unions and advocacy groups, and even the agency itself, said many of the problems come from years of understaffing and underfunding.

“We are also experiencing historically high levels of employees leaving the agency, because employees are carrying unreasonable workloads given the staffing shortage. As we lose employees, our service further deteriorates,” Nesbit said.

According to the agency, about 4,000 employees have left since prior to the COVID-19 pandemic — a 7% drop in staffing levels.

“With additional funding, the agency can continue to replace staffing losses, fund annual overtime levels at the same level as in 2022 and continue to fund information technology investments at levels similar to 2022,” an SSA spokesperson said in an email to Federal News Network.

For DDS state offices, which make disability findings and report to SSA, the 2023 budget request included more than $2.5 billion for payroll, hiring and workload processing costs, according to an SSA budget document. That’s an increase of $241 million from the enacted 2022 CR level. The budget request would add roughly 1,900 DDS employees and increase overtime.

“Consistent with national trends, the DDSs have experienced high staff attrition, particularly in their medical examiner positions, as well as difficulties hiring and retaining qualified candidates,” the SSA document said.

But working overtime can cause another challenge as well — the agency has posted consistently poor scores for how employees feel about their work-life balance. In a governmentwide pulse survey earlier this year, SSA employees had the highest levels of exhaustion of any agency surveyed.

To try to mitigate the large workloads, the budget request includes funding to hire 4,000 new employees at field offices and teleservice centers. Overall, the total federal payroll costs in the request total more than $8.3 billion — nearly $1 billion above the 2022 CR level.

One of SSA’s unions, the American Federation of Government Employees, wants even more funding for the agency. AFGE, which represents thousands of field office employees, asked Congress to give the agency $16.5 billion for fiscal 2023. That’s an additional $1.7 billion over the Biden administration’s request. AFGE said 60% of that should go toward staffing, 18% to DDS, 11% to IT modernization and the rest to increasing security.

“It’s time for Congress to end years of underfunding and provide the agency what it needs,” AFGE National President Everett Kelley said at a union rally in October.

Hiring new employees is only the first step of solving attrition challenges — the agency then needs to get people to stay. A survey that AFGE conducted found that four out of 10 SSA employees plan to leave the agency within the next year.

Like many SSA offices, the Office of Hearing Operations (OHO) has seen employees heading for the door. The office is in charge of drafting disability decisions once an administrative law judge (ALJ) has issued a decision in a case. The National Treasury Employees Union represents attorneys and paralegals that work in OHO, totaling about 1,500 attorneys and 75 staff members in the union. NTEU said OHO lost 447 employees between May 2020 and October of this year.

“I don’t believe we have lost them due to retirement,” Christie Saunders, NTEU president of chapter 224, said in an interview. “What people are looking for are other jobs that are more concrete.”

Even though OHO employees have been teleworking throughout the pandemic, a long-term telework policy remains up in the air. NTEU negotiated with SSA to get a six-month telework evaluation period, during which OHO employees would operate on a full telework schedule. During that time, SSA agreed to collect data on how office was functioning. But since the evaluation period ended on Sept. 30, Saunders said communications with the agency have diminished.

“We’re in this situation where we don’t know what’s going to happen going forward. It’s not that we didn’t have input into the reentry plan — we did — but once the evaluation period ended, then communications kind of fell apart,” she said. “At what point are they going to stop and evaluate that data that they’ve been able to collect?”

Saunders said the union is pushing for a more permanent, long-term telework policy for OHO employees.

“The agency underestimates how important telework is to our employees. But telework is kind of an ancillary problem to this bigger budget issue. We need the budget so that we can continue to operate, and we can continue to provide excellent public service. We have seen that happen in OHO — we continue to meet our goals and we are continuing get out decisions on disability cases,” Saunders said.

SSA is set to negotiate a new memorandum of understanding (MOU) with NTEU this March, which may yield a definitive telework policy. Until then, OHO employees will continue fully teleworking.

In another area of SSA, ALJs are tasked with making decisions on eligibility cases for Social Security benefits. Som Ramrup, president of the Association of Administrative Law Judges, the federal union representing the agency’s ALJs, said full-year funding would help resolve some of the issues at SSA.

“The two main issues, budget-wise, are hiring and technology,” Ramrup, an administrative law judge in New York City and an SSA employee for more than 20 years, said in an interview.

The case backlog for ALJs was up to 1.1 million at the height of the pandemic, but it’s now down to roughly 352,000. But at the same time, the backlog at DDS has about 1 million cases pending. Those cases eventually come to the appeals level and to the judges. At the height of the backlog, the ALJ corps had somewhere between 1,500 and 1,600. Now, staff is down to about 1,200.

“We keep losing judges all the time,” Ramrup said. “In addition to losses in the ALJ corps, there’s this incredible staff loss and staff turnover. The staff that we do have is working incredibly hard. But it’s getting to a point where we’ve had people quit and take jobs at other agencies.”

Hiring needs to start early, and often, for the agency to be prepared for any future workload increases, Ramrup added.

“The agency really needs to do a better job of recruiting, retaining and staffing up for what looks to be a significant workload coming our way,” she said. “It can’t wait until the last minute to be scrambling to hire folks, which was one of the issues that occurred during the height of the backlog. SSA needs to be prepared to handle that workload.”

AALJ recently signed a new term agreement with the agency, in which for the first time ever, negotiations didn’t come to an impasse — the two parties agreed on every article in the contract and implemented it on Oct. 9.

“The relationship with SSA has improved dramatically and I’m happy that Acting Commissioner [Kilolo] Kijakazi has set a tone and a direction that the negotiators for the agency are willing to work with us,” Ramrup said. “Having said that, there are still some significant issues that the ALJ corps has with the agency, including the unreasonable and unsubstantiated quota that the agency still imposes the judges at SSA.”

The case quota at SSA requires judges to schedule 50 cases per month and dispose of between 500 and 700 cases each year. Notably, a Government Accountability Office report from last year found that 87% of judges surveyed said the expectation is “too high.”

Ultimately, with its 2023 budget in hand, SSA said it would be able to reach some hefty goals. The agency plans to reach an average processing time of 164 days and decide 85% of pending initial disability claims that are 180 days old or more, by the end of next September. The agency also wants to complete 350,000 more initial disability claims in 2023 than it did two years ago.

“We cannot keep up with the demand for service and our annual fixed cost increases like salaries, rent and guard services,” Nesbit said. “The bottom line is that we need more funding to deliver the services you expect and deserve.” 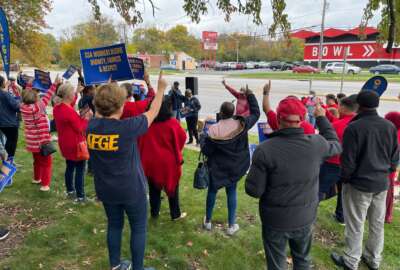